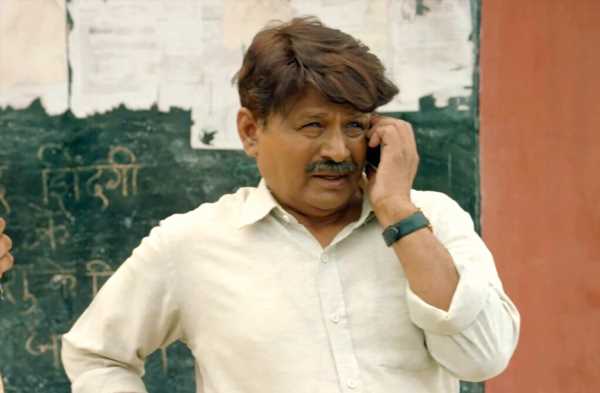 ‘If you sit collar turned up and tell yourself, you are great, you will never evolve as an actor.’

After more than three decades in the industry, the fascinating Raghubir Yadav still surprises us.

The actor has been wowing audiences in his role as Pradhanji in the Amazon Prime Video series, Panchayat.

You live the role of the Pradhan, Brij Bhushan Dubey, in Panchayat, a performance that bagged you the OTT Filmfare Award for Best Supporting Actor in a Comedy Series. The accolades must be satisfying?

I am never completely satisfied with a performance, mujhe hamesha khamiyan dikhai deti hai (I keep spotting flaws) and I’m always trying to correct them.

Recently, when I met the Panchayat Director (Deepak Kumar Misra), I told him that this time I would not listen to anyone, only my own heart.

But then, this is teamwork and in trying to improve my performance, I don’t want to ruin the show.

So then I told him that if I went astray, woh mujhe sambhal le, let the reins be in his hands so he can pull me back and put me back on course. When you revisit Massey Sahib, what stands out in your debut performance?

Well, it was my first film and there were many flaws, but I performed with honesty and sincerity.

Arundhati Roy played my wife, long before she became a Booker Prize-winning novelist, and her (then) husband, Pradeep Krishen, directed the film.

From him, I learnt that while on stage, you can fake a bit because the audience is sitting at a distance. But you can’t lie to a movie camera.

Usually, when you land a role in a film, you start thinking how you are going to ‘act’, but I had been warned that if the emotions didn’t ring true, the character becomes a caricature. Like Massey Sahib, Salaam Bombay was another nationally and internationally acclaimed film, the first of many featuring you to be nominated for the Oscars. What was the challenge of playing Chillum?

(Laughs) The challenge was that before I started shooting for this film, I had not even touched a cigarette.

Mira Nair (director) lit the first cigarette for me and worked very hard to teach me how to smoke.

But even today, I can’t inhale the smoke.

The world of Salaam Bombay was an unfamiliar one, so during a six-week workshop, I would sit with young drug addicts, observe their reactions when they got a stash of brown sugar or when they couldn’t lay their hands on one.

I noted how they smoked up and used this experience to express myself on screen. Aamir Khan’s Lagaan, in which you played Bhura, was also in contention for the Oscar for Best Film in a Foreign Language…

It was my second film after Salaam Bombay to go to the Oscars, and I was delighted when it was nominated to the top five.

I was so disappointed when it was pipped at the post by the Bosnian war film, No Man’s Land, that I switched off the TV.

What was your reaction to this heartbreaking loss?

Winning and losing is not important.

You don’t have to win in the first attempt, ab jab yahan tak paunch gaye hain tab ek din Oscar bhi mil jayegi (now that we have reached this far, one day we will win the Oscar too).

We just need to focus on our weaknesses and work a little harder to iron them out.

Agar mil gaya hota (had we won), my responsibility would have increased, aage jo bhi karo, kamzor nahi padhna chahiye (whatever you do in future, you should not fall short). Another Aamir Khan production, the satirical black comedy Peepli [Live], in which you played Budhia, is not just memorable for another nuanced performance, but also for your song, Mehangai Dayan.

(Laughs) Yes, even today, wherever I go, I am asked to sing it.

But I tell people that it is better that they don’t hear it because since I sang it, prices have sky-rocketed.

Peepli [Live] was a tongue-in-cheek take on politics and elections. You are one of Madhya Pradesh’s most famous personalities. Have you been offered a ticket to contest from your home state?

It’s enough that I focus on the profession which I have chosen since it needs many lifetimes to perfect this craft.

Issi se fursat nahin milti hai, main aur kahan jaaonga (I’m so caught up in films that there’s no time for anything else).

What kind of roles inspire you today?

I only do the kind of work I enjoy, where there is scope for something interesting.

For me, work is wealth, so I don’t do too much, bas itna hai jo bardasht ho jaye (only as much as I can manage). There was this really interesting film, Ghode Ko Jalebi Khilane Le Ja Riya Hoon, which grew out of seven years of documentation of the lives of the street people in Old Delhi, from beggars and pickpockets to street singers and small-time factory workers.

Yes, it was a unique film.

The first day when we were in Purani Dilli, I wondered how we would shoot here given that there was no place even to walk.

But Anamika (writer-director Anamika Haksar) and her team had done their pre-production well, the arrangements were amazing and all we actors had to worry about was our performance.

After two-three days, I started enjoying myself.

Everyone around me was working so hard and sincerely, bheed bhaad mein bhi ek alag rah ki badi hi khushnuma zindagi lag rahi thi (Even in the crowd, I could see the path to a beautiful life).

Anamika is brilliant. When doing the film, I didn’t realise it.

But after watching it, I knew what kamaal (wonders) this girl has done, she has changed the definition of cinema completely.

Yes, the shooting is done, we shot in Kolkata.

Kaushik Ganguly is an established director in Bengal, this is his first Hindi film and also features Supriya Pathak and some local artistes. Have people in your village watched Panchayat?

They have watched the series five-six times already. I get calls about when we are coming out with the third season.

When I tell them there’s still time, they say they will continue to watch the two seasons till then.

After two successful seasons, zimmedari bad gayi hai (the responsibility has increased), so the writing is taking a little more time than usual.

But by December-January, we should start shooting.

The series is into its third season. Aren’t you bored?

You get bored when things get stale, I am always looking to do something new.

At NSD, my guru Ebrahim Alkazi would constantly tell us not to get satiated. Even if we had to do the same thing, we had to do it differently every time.

If on two days straight my performance was the same, he would reprimand me saying, I was too easily satisfied and had started repeating myself.

If you sit haath ke upar haath daal kar (hand on hand), collar turned up and tell yourself, you are great, you will never evolve as an actor. One remembers your television series, Mugerilal Ke Haseen Sapne, which aired on Doordarshan in 1989-1990? Has any of Raghubir Yadav’s dreams come true?

My dream is to learn something new every day.

I keep buying, making, learning and playing different musical instruments, music is everywhere, I want to immerse myself in it. Usse bada sukoon aur kahin nahin hai (There’s no bigger satisfaction than this). 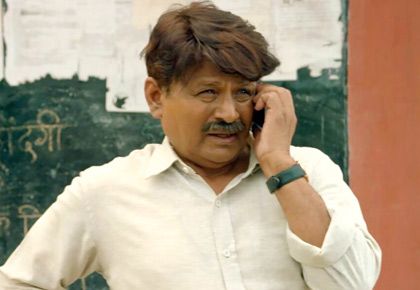