During the lunch or tea breaks, Maharajji, Manikda, Amjad Khan and I often sat together as Maharajji sang old compositions or recited some bols.
Amjad Khan had a great music sense and sang very well.
A fascinating excerpt from Birju Maharaj: The Master Through My Eyes by his disciple, Saswati Sen.

For Mughal-e-Azam, (Birju) Maharajji was invited to dance along with Gopi Kishanji and Vyjayanthimala in the last royal court dance scene. Then somehow it changed to Maharajji and Gopi Kishanji.

During the rehearsals, Maharajji kept telling Gopi Kishanji to take smaller leaps, but, during a final trial, he jumped even higher. He really felt bad and humiliated and quit the assignment as he thought he was having to compromise with his style for the sake of the film.

However, during the premiere of Mughal-e-Azam, he performed a memorable solo on the sets of the famous Sheesh Mahal or Palace of Mirrors.

He remembers the galaxy of stars in the audience, the lavish party with drinks flowing and also how elegantly Raj Kapoor made the announcements.

Maharajji was once invited to direct a dance piece for Vyjayanthimala in Chhoti Si Mulaqat, but, after a few days, he called it off as he was not happy with it.

Around 1971-1972, Maharajji composed some dance pieces for Asha Parekh’s stage productions — Anarkali and Chaola Devi. They worked hard and the result was very successful. He composed a special tarana for her, which he has refused to teach anyone else till date. 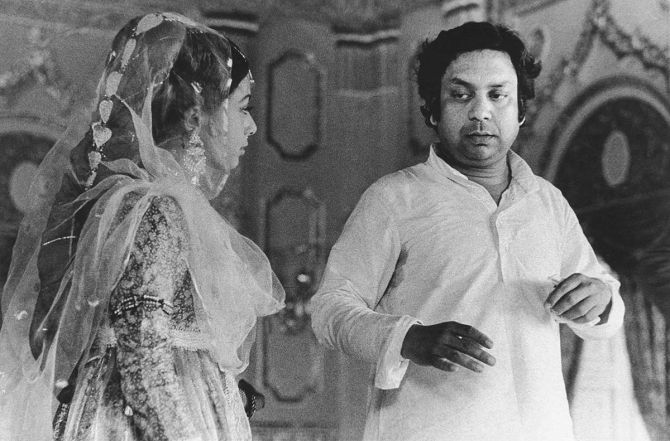 In 1976-1977, Satyajit Ray, the legendary film-maker, was planning his Hindi film Shatranj Ke Khilari in which he recreated the era of Nawab Wajid Ali Shah’s reign in Avadh.

I was doing my graduation in anthropology at Delhi University at that time and usually attended my dance classes only in the evenings.

Manikda (Satyajit Ray) saw a performance of mine at Vigyan Bhavan (New Delhi) and requested Maharajji to choreograph two dance sequences for the film.

Maharajji gladly agreed and after several discussions in various compositions by Bindadinji (Pandit Bindadin Maharaj), they selected one of his thumris for a court dance sequence.

The next step was to find a suitable dancer for this scene.

Maharajji introduced Manikda to many of his students, but ultimately I was selected. My parents had to be coaxed to give their permission.

Manikda asked Maharajji to try and reproduce the style that prevailed in the courts during that time.

Maharajji‘s ancestors, having served the Nawab for a long time, had left vivid images of their style in the family. Maharajji had also heard several stories from his mother and uncles. 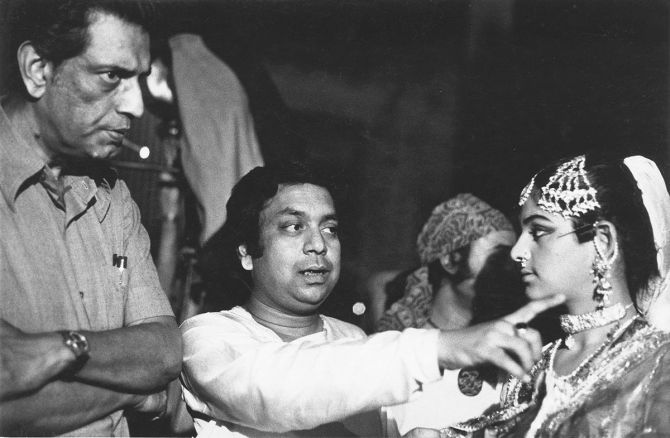 Working on Shatranj Ke Khilari was such a memorable experience.

It started with the recording of the music for the two dance sequences which Maharajji was choreographing.

One was a group dance with Amjad Khan (as Wajid Ali Khan), who enacted the role of Krishna dancing with sakhis (concubines).

Two of Wajid Aliji‘s own compositions were used in this piece — Hindola jhoole Shyam and Jan-e-aalam Rabas mubarak.

The other was a solo number in a court scene. Bindadinji‘s Bhairavi, Kanha mein tose haree, was chosen, for which Maharajji sang the playback soulfully.

Maharajji did nearly twenty-five takes during the recording and was still not satisfied with his own song.

So we all shouted ‘encore’ after the next recording and Maharajji finally felt good.

Then came the preparation of the piece.

I think there were three or four instances in my lifetime when Maharajji worked one-on-one with me. This film was one of them.

I worked day and night on my body lines, gestures, stances, expressions and finally the result was beautiful.

The viewers loved it and everyone still talks about it. 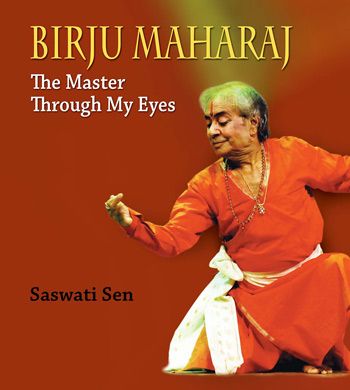 The shooting for the film was a unique experience.

Manikda‘s team was like a family and we easily became a part of it.

Maharajji and he shared a great relationship with mutual admiration. Maharajji wanted to compose a fast, exciting dance piece, but Manikda told him to try and recreate the ambience of the courts as he had heard and known.

Maharajji then developed an even greater respect for the genius director and composed a lyrical, emotional and elegant dance piece, regal and appropriate for the film.

During the sets we would see Manikda taking care of every minute detail.

My head bowed at his feet when I saw him helping the most junior set boys as he took the hammer and nailed the frames and the curtains or arranged the carpets.

During the lunch or tea breaks, Maharajji, Manikda, Amjad Khan and I often sat together as Maharajji sang old compositions or recited some bols. Amjad Khan had a great music sense and sang very well.

Maharajji also composed music for three dance bhav sequences for a film in Guyana (Fields Of Sugarcane), which were choreographed by Pratap Pawarji as he was a teacher there.

Then, after a long gap, Maharajji‘s association with Madhuri Dixit during our visits to the USA brought him back to the film world in early 2000.

He composed a short dance sequence for Madhuri in the film Dil To Pagal Hai. The background music was mostly based on drums and Madhuri excelled in the presentation.

His choreography for Devdas, directed by Sanjay Leela Bhansali, was a masterpiece, keeping the classical Kathak style intact.

I had the opportunity to assist Maharajji in the film and it was a great experience to see the creativity and sincerity in the work of Sanjay Leela Bhansali, which reminded me of Manikda‘s meticulous planning of his films.

Maharajji also did the choreography for the film Pranali, for the upcoming actress, Nargis Bagheri. 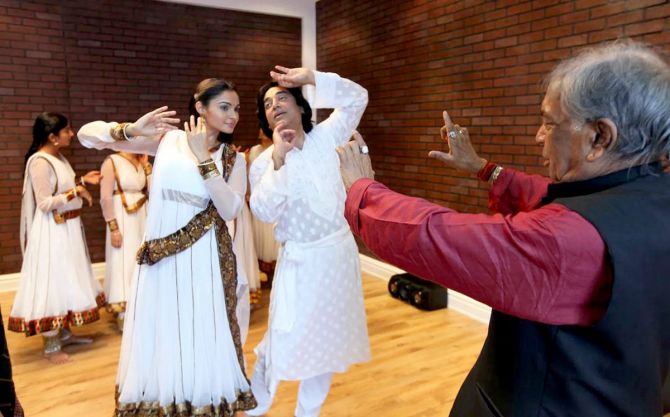 The next big project was Kamal Haasan’s film Vishwaroopam, in Tamil and Hindi.

Kamalji is another fantastic actor — very creative and sincere.

He initially spent some time learning Kathak steps from Maharajji and then worked with total dedication for the choreography.

For Maharajji, it was a challenging task to create movements and rhythmic patterns which would be appropriate for a non-Kathak male dancer. The composition was, of course, extremely interesting. 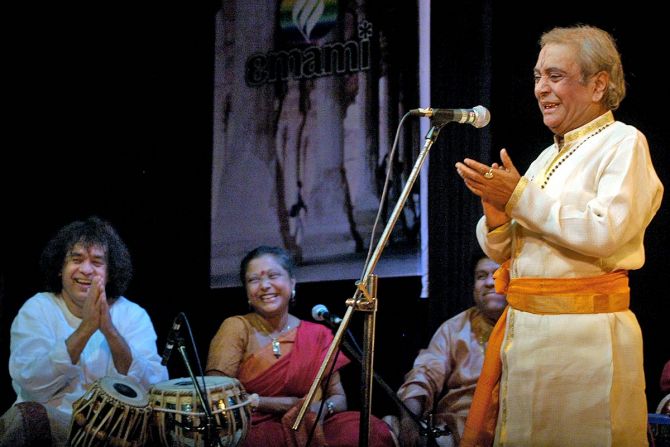 Since childhood Maharajji had a great inclination towards music.

He started composing music and ghazals at the age of 21 or 22 and trained young vocalists like Anjan Chatterjee, Dilraj Kaur and Suman Lata.

The first songs that Maharajji composed were for Anima Das at the All India Radio.

Initially he was hesitant and always told them not to mention his name publicly, but soon people were curious to know the name of the composer and he became quite popular.

Excerpted from Birju Maharaj: The Master Through My Eyes by Saswati Sen, with the kind permission of the publishers, Niyogi Books. 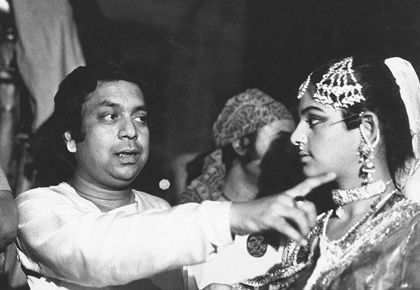