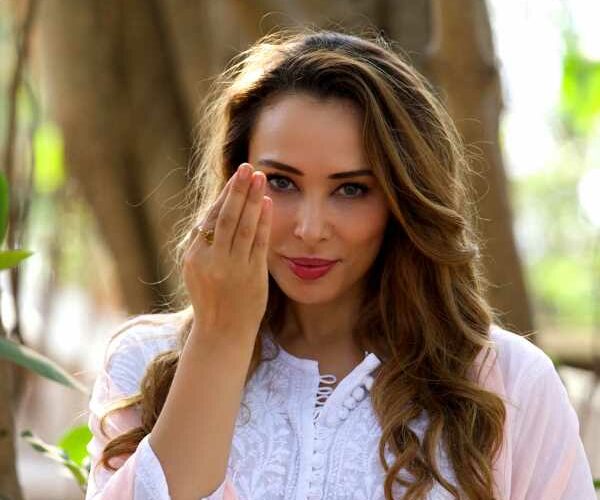 ‘Salman has supported me, but at the same time, let me have my own journey.’

Iulia Vantur has come into her own as a singer with back-to-back song releases.

She also had a successful US tour with Guru Randhawa and Kanika Kapoor recently.

Iulia tells Rediff.com Contributor Sameena Razzaq, “It took me a year to convince myself that it’s okay to sing here. Salman was mainly the one who encouraged me to sing. He made me believe in myself.”

You had a successful US tour with Guru Randhawa and Kanika Kapoor. Any last minute stage fright while singing live to a huge crowd?

Of course, I was very nervous!

I was the last addition to the tour so I had less time to prepare.

I had to rehearse before the show.

The songs had choreography also. There were different dancers for every show.

I had to make sure the dancers knew the dance steps.

But once I was on stage, all the tension was gone.

The audience was incredible and they received us so well. We had shows all over the US.

This was the first big event after the pandemic and people were craving for music and dance, so it was an amazing experience. The crowd was singing, dancing and sharing the same energy.

Guru Randhawa and Kanika Kapoor are so talented. I love them as performers. They used to call me on stage and make me sing with them, so it was a lot of fun. You seem to be on a roll with back-to-back song releases. Would you call this an exciting phase of your career?

Yes. Finally, the songs which were waiting for so long to be released are coming out.

All these years, I just worked, but my work was not showcased.

Sometimes the blockages move away and there is a flow; I think this is happening now.

I am so happy that finally my work can be seen.

There are so many projects I have been working on and they are still waiting to be released.

We started with Main Chala with Guru Randhawa.

Designer Lehenga with Himesh Reshammiya released when I was on the US tour.

I did the hook step of the song with the audience and it was so much fun.

Yes, I am enjoying this phase. I feel fortunate to have the chance to work with so many talented people. Your first collaboration with Arjun Kanungo has also turned out to be a hit. How encouraging is the success of Tera Tha Tera Hoon for you?

I believed in this song from the moment I heard it.

When Arjun played it for me, I was completely into it and then he asked me if I would like to sing. I said, are you kidding, I would love it!

So we recorded the song and then Haider Khan came on board and we shot a beautiful music video in Kerala.

We all know Kerala is like a fairy-tale environment and the backwaters are so beautiful. He created a fairy-tale story.

I felt he did the song so well with his vision.

I am so glad people received it very well. Even in Romania, people will love this song very much. How did you get into singing?

I think I always loved to sing.

I used to have special moments with dance and music for my TV show Dancing With The Stars.

When I came to India, it so happened that I sang a Romanian song and it became Teri Meri Prem Kahani.

I think that was the beginning of my singing journey in India.

Himesh Reshammiya loved my voice and people around encouraged me to pursue this.

Of course, I used to love singing, but I never thought I could make a career out of it.

It took me more than one year to convince myself that I could.

When people believed in me so much and trusted me, it gave me confidence.

I began taking it seriously and not just as a hobby; I start training. Your docu-series Beyond The Star will give us a rare glimpse into Salman’s years in Bollywood and also introduce people to the kind of person he is off screen. What led you to this idea and when is the series releasing?

This idea came during the lockdown. It started with a smaller concept, and then I developed it.

Initially, Salman was not supposed to be the first hero in the series.

We all know the stars, the glamour, the whole image that surrounds them, but we hardly know the people who create these stars and are their support system.

I thought their contribution has to be acknowledged as they are important part of a star’s life.

The star is like a machinery and everyone is contributing to make that machinery run.

I wanted this project to be motivational for people so they understand it’s not only glamour, but also a lot of struggle.

There are a lot of challenging moments in their lives and they have to face it all to become a winner in life.

A successful person has learnt how to bounce back and now, because we are talking about Salman, I think he is the perfect example of that.

He has faced so many challenges in life and has always bounced back stronger.

We still have a few interviews left.

Ninety-five percent of the work is done, just three interviews are left. We have started to edit.

Hopefully, it will release this year. Salman was quite spellbound when you sang Main Chala on Bigg Boss 15. Does he feel you are a better singer than him?

There is no one better than Salman.

You know what I love about Salman?

He loves singing so much!

He enjoys himself when he sings.

I think in another life, he was a singer. He was a rockstar, definitely!

He was mainly the one who encouraged me to sing. He made me believe in myself.

We have seen Salman consistently supporting you in all your endeavors. Is he more of a mentor, a confidante, support system or just family to you?

I think he is all that you mentioned and more because he is one person who will always support people.

When he believes in something, he will give all his energy to it.

He has supported so many people he believed in.

He has supported me, but at the same time, let me have my own journey. Mumbai is a ruthless city. People sometimes give up before they start. How did you manage to sail through the odds?

It took me a year to convince myself that it’s okay to sing here.

Of course, there were the music composers, the singers and Salman who believed in me.

They said they love my voice.

I understand it’s a different kind of world.

Singing in Hindi is a challenge, and I love challenges.

I have explored a lot in my life.

I started from news anchoring, then I did Dancing With The Stars.

I hosted a political show at one point during the elections.

I have acted on stage.

Now, I have moved onto singing, so it’s very diverse.

I think an artiste has to explore so s/he can understand what suits best.

I try to protect my personal life as much as I can because I think this is a healthy way of living in industry.

Gradually, I will have the courage to open up and to share more.

Your debut film Laila Majnu is almost ready. When is it releasing?

I have no idea. The producers will take a call on it.

People who have seen it have loved it.

I like the message (Director) Prem Soni has tried to convey through this movie.

Prem Soni had told me this is a perfect role for you, please do a special appearance. I agreed because the character is a foreigner.

It’s a descendant of the royal British family, so I enjoyed doing it.

I have acted in movies in Romania, so I will not call it a debut. You have done an action film in UK. What’s the update on that?

Because of the lockdown, the movie has not been completed.

The producers are thinking of making a series, and I am looking forward to more action.

It gives me a lot of energy.

You spent quality time with Preity Zinta in Los Angeles. Is she your BFF in Bollywood?

If you have met Preity Zinta, you would know what I am talking about.

Her energy is so bubbly, so positive, it’s a pleasure to be around her.

I got a chance to see her little ones as well.

She is so happy as a mom now.

I am so happy for her and her husband Gene (Goodenough). They are wonderful together.

There is buzz that you will be a part of Salman’s next film, Kabhi Eid Kabhi Diwali. Can we have some details on this?

I know nothing on this so far.