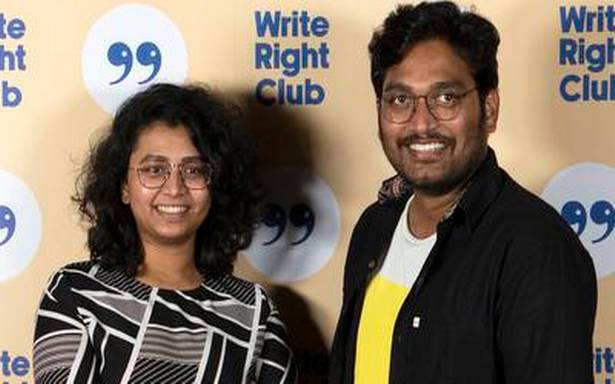 Venkatesh Maha is among the strong emerging voices of Telugu cinema, having written and directed the much-appreciated Care of Kancharapalem (2018) and Uma Maheswara Ugra Roopasya (2020). Puja teaches screenwriting at the Annapurna College of Film and Media, in Hyderabad, and has written, directed, and produced shorts and documentaries. Maha and Kolluru had met to collaborate for a film and their shared interest in writing paved the way for Write Right Club.

“We began with a screenwriting workshop since we are filmmakers. Moving forward, we want participants to explore multiple formats — poetry, novel, screenplays — the techniques they learn should help them write anything from a quote to a magnum opus. We are not limited to nurturing writers for cinema and digital platforms,” says Maha.

Of the 100 who participated in the first workshop, five will be selected to be a part of WRC for a year and receive a stipend. They will get to work with Maha and Kolluru for their projects as well as write their own independent works.

“The idea is to bring the joy back into writing and help writers get due credit,” Maha and Kolluru emphasise. In the film industry, scripts are most often the result of collaborative work but writers rarely get credit. WRC hopes to amend that when stories and screenplays written by members of the club get selected for cinema or web series.

In Telugu film industry circles, a dearth of writers is often cited as the reason for the lack of original stories and screenplays. The duo believe that assurance of remuneration and credit will encourage new writers to explore the sector: “Most aspirants enter the industry to become directors or actors, not writers. That will change only when there’s recognition.”

Maha looks at writing as an essential aspect of documenting society and culture for future generations: “Writers form the bridge between past, present, and future. A book or a film becomes a window into the history and culture of an era,” he says.

A germ of an idea

The WRC is a result of experiencing what such a forum could do to encourage creative thinking. Maha had taken up a course in advanced screenwriting at Gotham Writers’ Workshop in New York City. Kolluru got a degree in fine arts in film at the Ringling College of Art and Design, Florida, where she specialised in screenwriting and direction.

In both these academic spaces, they found an easy exchange of ideas between mentors and writers and wanted to start something on similar lines in Hyderabad.

“I received a lot of appreciation for my writing after the release of CoK. But I needed to know if I was on the right track. The course at Gotham Writers’ Workshop served as validation. Even while making CoK, I realised that significant work happens at the writing stage. On set, you give wing to the writer’s imagination,” says Maha.

Kolluru adds that the importance of writing often gets camouflaged by other glamorous aspects of filmmaking: “The ecstasy of writing is incomparable.”

At the workshop, Maha taught the structure of storytelling and screenplay, while Kolluru taught how to write in accordance to a theme, explore conflict, and trace the journey of a protagonist, using relevant clippings from films: “We went well beyond the basics; we condensed all that we had learnt into easy-to-understand modules,” she says.

The WRC is currently managed by five core members. Like-minded writers and filmmakers have expressed an interest for collaborations for future workshops and to manage the day-to-day functioning of the club. “WRC will be streamlined to function on its own even when Puja and I are busy with our film projects,” says Maha.

WRC also intends to bring out a magazine. The timeline hasn’t been locked in: “The magazine will take shape once we have a bank of content,” says Maha.

08/13/2021 TV & Movies Comments Off on Venkatesh Maha: We want Write Right Club to be a creative writing hub
India