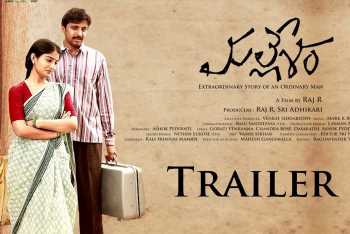 Surely Telugu cinema is evolving big time and these type of films coming up from Telangana based filmmakers are winning hearts. After the likes of C/o Kancharapalem, Fidaa and Arjun Reddy, here comes another realistic entertainer in Tollywood which crafts a real story into a film.

If we have to go by the trailer, it narrates the story of Mallesham, who has started inventing a weaving machine for the sake of his ailing mother. Despite studying just 6th standard, Mallesham tries all means to build the machine. However, his family and life falls into miserable situation as he gets debt ridden due to his obsession to make that machine at any cost.

Playing the titular role, comedian Priyadarshi is quite impressive as he played the real life role of weaver Chintakindi Mallesham who has won Padmasri Award for inventing a machine yarn that weaves a Pochampalli saree in 1.5 hours, which actually takes 6 hours if done by hand. Also the female lead Ananya justified her part while Jhansi as an ailing mother took ‘Mallesham’ to another level.

The trailer depicts the journey of this ordinary man very well as director Raj R conceived the scenes quite brilliantly. Realistic cinematography by Balu Sandilyas and Mark K Robin’s intriguing background score have worked quite well. Seems like the film might get an extra-ordinary result, let’s hope for it.