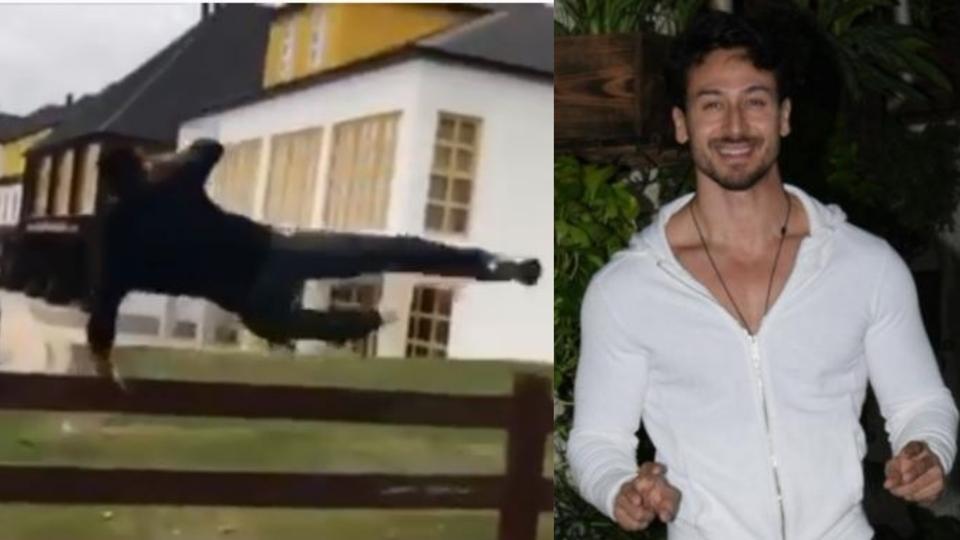 Actor Tiger Shroff, who is a gymnast and a fantastic dancer, is currently in Portugal and has found out a way to stick to his fitness routine in between his shooting schedules. Tiger shared a video of him running around, jumping over fences and doing full backflips as part of his morning workout. He captioned it on Instagram, “Morning jogs in #portugal.”

His gravity-defying jogging left many of his friends and fans gasp in amazement. Rumoured girlfriend Disha Patani was among the first ones to react to the video. She shared a two fire emojis in the comments section. Undisputed II: Last Man Standing actor Scott Adkins commented, Awesome Tiger…” Several others simply called him ‘Awesome’.

Tiger is currently working on a Siddharth Anand film that also stars his mentor, Hrithik Roshan.

According to a recent ANI report, Mumbai Police arrested two of his crew members, Balram Ginwala and Arbaaz Khan for creating panic and disrupting peace among citizens while dressed as terrorists.

Apart from his films, Tiger also remains in news over his linkup rumours with actor Disha Patani. The two are regularly spotted on dinner and lunch dates. When Disha was asked about the same, she told Bollywood Hungama, “I’ve been trying for so long, it’s been so many years and I’ve been trying to impress him. Now I’ve done this film Bharat where I’m doing all these stunts and I thought maybe he’ll get impressed but no luck. Yeah, we go to eat but that doesn’t mean he’s impressed, not like that like the crush impressed; but he likes everybody’s pictures like that. You must speak to him the next time. He’s shy and I’m shy so nobody’s breaking the ice.”

Also read: Rishi Kapoor posts emotional tweet as he completes 8 months in New York for cancer treatment, asks ‘When will I ever get home?’

She said in another interview to Pinkvilla, “He is too slow motion, man. I’m been trying to impress him and I keep telling him that. I have learnt gymnastics and I’ve done a film where I’m taking a flip through a fire ring. He’s still not impressed. What more can I do?”

Tiger, was last seen romancing debutants Ananya Panday and Tara Sutaria in Student of the Year 2. He will also be seen in the Hindi remake of Sylvester Stallone’s Hollywood film Rambo.