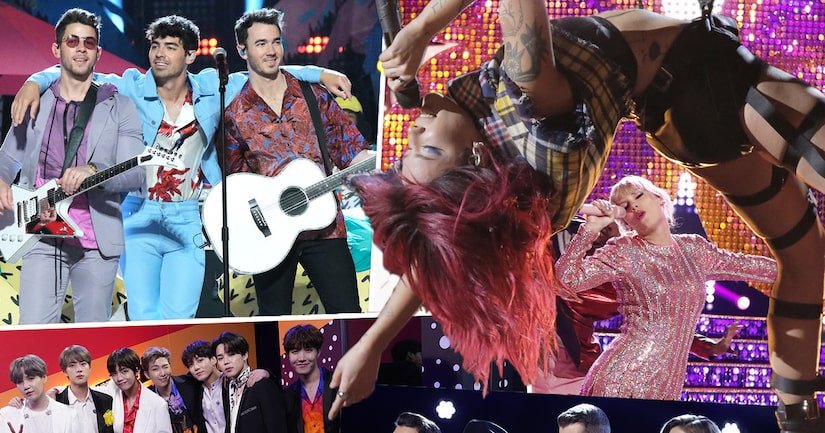 NBC pulled out all the stops for the Season 16 finale of the voice, lining up huge guest stars like BTS, Khalid, The Jonas Brothers and Taylor Swift & Brendon Urie among many others. But in the end, it came down to four singers and two coaches.

John Legend was trying to follow in Kelly Clarkson’s footsteps and win the show on his first season as a coach, but Blake Shelton set him up a huge obstacle to get there. Three of the Top 4 were on Team Blake, leaving Legend just one contestant to pin all his hopes and dreams on.

It was country singers Gyth Rigdon, Dexter Roberts and Andrew Sevener against indie-pop singer Maelyn Jarmon. She was the only woman left in the competition, but would that help her or hurt her? "American Idol" had one woman left in its Top 3 this season and she wound up in third — plus, never underestimate the power of the country music voting bloc on these shows.

But before they got to the big reveal on who’d won the night, "The Voice" had some time to fill, and they did so with returning contestants, all-star duets and some of the biggest names in music entertainment.

People used to complain about two hours of filler back in the heyday of "American Idol," but when you can put on a star-studded night of concert performances like this, what’s to complain about?

It’s not filled too much with eliminated contestants from throughout the season — they have to settle for group performances — leaving more room for standout performances from some of the biggest and best names in music from yesterday and today.

Seriously, check out this lineup:

While Tritt showed some powerful vocals and solid range, it was a rather sleepy perforamnce from Sevener. This track is a rollicking good time, so it was a little disappointing that he was almost overshadowed by the music and definitely outsang by his stage partner. We get that nerves were high to start off the show, but Andrew was definitely glad this was just a showcase. Maybe there was a sound issue with the mics, as Tritt got overwhelmed at times by the band as well.

The JoBros brought the beach part to the finale complete with kiddie pools, beach balls and of course all the pretty girls in swimsuits. But most importantly, they brought a solid performance and a great showcase for Joe Jonas in particular on this song. Both he and Nick carry the load for the band, and Nick gave a great into, but it was Joe who really shined in the middle part of the song with his rich, throaty vocals.

One of the catchiest jams on the airwaves, John Legend’s co-coach — for one round at least — has one of the silkiest voices in R&B right now, and he slayed this performance. Hopefully all of the contestants are watching these professional to see the subtle differences between what they bring to the stage in comparison. Khalid does lilttle more than just wander back and forth as he performs, but he’s got the rhythm in his body and sells it with the smallest movements and bops. It’s about owning the song and each little moment in it.

Mari wasn’t quite as solid on teh vocals as the song wanted her to be, but Kim Cherry really brought it through the verses and with the rap. It was a high-energy performance, but Mari never quite found the pitch consistently enough to elevate it to great, instead showing why she didn’t make it into the finale on her own.

The ladies performance segued seamlessly into the guys, with all five sliding out like they were members of New Edition or something. They certainly looked the part, and their harmonies were on point, but it wasn’t as solid when each got a few bars for solo work. Domenic Haynes probably represented himself the best, followed by LB Crew. Haynes actually had a bit of a Bobby Brown vibe, while Crew was more soulful. The others sounded more like those people who over-sing at karaoke. Just because you can run doesn’t mean you should always do it!

The band debuted their new single as part of a cross-promotion for next week’s songwriting reality show premiere "Songland." It’s a catchy little track right in their wheelhouse, and Ryan Tedder was effortless in reaching its peaks and sliding into its bombastic rhythm and rapid pace through the verses. As a showcase for songwriting, this is a great choice for the band as it has a very distinct sound and unique cadence. The song itself stands out even more than the performance.

"Let Her Cry," Hootie & the Blowfish

Darius Rucker and company slowed down this classic ’90s hit and poured so much soul into this performance. It was mesmerizing from the very beginning, and the acoustic interpretation had it feeling like a fresh and new song all over again. Vocally, Rucker has lost nothing over the years, giving the night’s most genuine rendition of a song you know he’s sang thousands of times.

It takes a very special voice to do justice to this iconic song of heartbreak and sadness and Jarmon proved she had the vocal chops to stand side by side with McLachlan and bring that same gut-wrenching ethereal quality to her voice. It says a lot that they were able to harmonize so beautifully as McLachlan has one of the most singular voices in music. Jarmon has her own thing going, but it shares a quality that is absolutely stunning to watch.

One of the most polished live performers, BTS actually looked a little more spontaneous this time around and it added so much to the performance. Yes, it was still meticulously choreographed, but there was more a sense of this being live and fun for them than just work. Vocally, they sound incredible live when you consider how much work they’re putting in physically throughout these performances. They must be in fantastic shape. Also, Halsey was totally in the house so why just use her vocal track?

Toby Keith brought a lot of vocal energy to this piece, bringing a little more out of Roberts along the way. It was fun watching them play off of each other. That said, Keith really dominated this performance, taking most of the lines throughout it, so while it was a duet it was definitely the Toby Keith show. And as this was mostly a list of names, Roberts proved he needs to open his mouth and speak a little more clearly, as his names were definitely more muddled.

Maybe Halsey wasn’t available to perform with BTS because she was already hanging from the ceiling in preparation for this performance. Considering all she did was drop to the stage in a backbend, it took wa-a-a-a-ay too long to unstrap her from the harness so she could get into the performance properly. Was that quick visual worth it? As for the song, it’s an empowerment anthem that she presented with just the right amount of contained rage and frustration and defiance. It’s got the DNA of a hit, with great energy, punch and power at just the right moments.

Celia Babini carried the early part of this track, but it was the Lisa Ramey show by the midway point. Props to all four women for really capturing the spirit of Stevie Nicks with their style and approach to the song. Their harmonies, by the way, were simply fantastic. Betsy Ade got her chance to shine by the end, while Presley Tennant got a power note. All in all, they smashed the guys’ group number from early in the night.

"Hold My Hand," Hootie & the Blowfish

The Hootie nostalgia was real tonight with two amazing tracks from their breakout decade. We weren’t sure how well Gyth Rigdon would mesh into this track, but his storytelling sincerity shined through that vocal and he was perfectly in synch with the song, its lyrics and Daris Rucker, who coulnd’t stop smiling as Rigdon sang. You could feel the mutual respect and chemistry between the two men and it really made that something special.

This one didn’t seem to be particularly live vocally, but it was nonetheless a fun performance. Taylor and Brendon rocking some dad choreography is always fun to watch, and she certainly brought a lot of bright color and energy to the stage. It’s always interesting to see how Taylor continues to evolve her pop persona and this should be a fun era to explore with her whenever this track’s accompanying album drops.

Fourth Place – Andrew Sevener had to settle for fourth place, which makes sense. He just lacked that passion when he performs for some reason, because we know it’s there.

It all came down to Gyth Rigdon and Maelyn Jarmon. In all honesty, both are worthy champions, but there’s just something extra special about the quality of Maelyn’s voice. And America totally agreed, declaring Maelyn Jarmon their winner, putting Gyth Rigdon in second place.

Even Gyth seemed confident she would win before it was announced, gesturing to her like she was "The Voice" before Carson Daly made it official. She was a favorite throughout the run, and she beat the odds here in the finals. At the same time, is it possible three country crooners split their vote, helping catapult her to the top.

At the same time, we continue to believe that country singers seem to find the most success outside of the show once the lights go down, which means this win might be more beneficial in the real world for Jarmon than it would for any of the three guys. They’ve got their fan base in a very loving community that has embraced reality stars, including several from this show.

It’s not so easy in any other genre of music for former contestants of this or any reality show. But that’s what’s next for all the contestants this season. They were superstars for this dedicated fanbase. Now it’s time to see if the real world wants them, too.