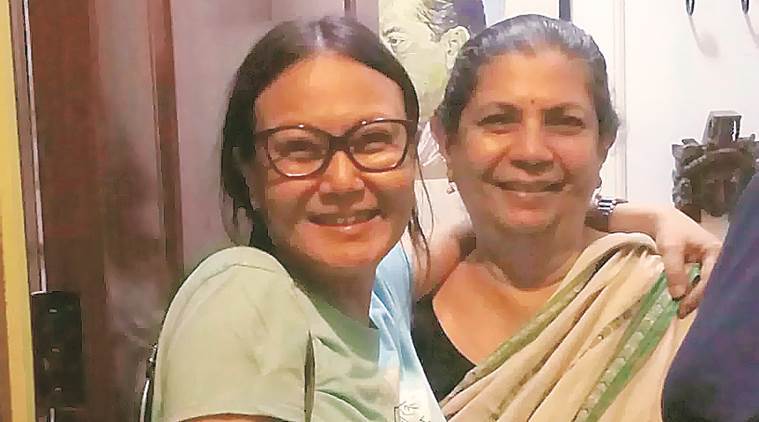 Film-maker and writer Rinki Roy Bhattacharya, daughter of film legend Bimal Roy, is currently holding a retrospective of films starring Nutan to mark the latter’s 83rd birth anniversary. She talks to The Indian Express about preserving her father’s legacy. The Bimal Roy Memorial and Film Society is preserving and restoring Roy’s film library and memorabilia. How far has this project come along? Tell us a little about how you are preserving Bimal Roy’s legacy.

We formed the organisation rather spontaneously one day when we were sitting at home 22 years ago. This is my modest attempt at resurrecting my father’s legacy and this includes primarily his films. Bimal Roy had more numbers of well-loved films than many of his contemporaries. Udayer Pathey for example, made before Independence on a shoestring budget, remains to date the biggest box office success in the repertoire of New Theatres, Calcutta. Bimal Roy’s fans all over the world want to revisit his films such as Sujata, Bandini. And these are not films made for Netflix — they are conceived, shot and made for the big screen. And 52 years since my father passed away, today’s distributors cannot hold a theatrical release of black and white classics. So how do we watch these films unless we organise it ourselves? That’s what I am trying to do. There is a renewed interest from global players in his work. For example, we are in discussions for a MOMA retrospective of his films in New York.

A recent addition to Mumbai is the film museum that has been received very well. Would you say we are adequately responsible about documenting and researching Indian filmography?

I am thrilled that a national film museum has been inaugurated in Mumbai, it is a welcome step. But a lot more can be done. For example, I have inherited from my father a great deal of memorabilia including lobby books, posters, original stills, his camera, etc. I hope a museum will show interest in curating a Bimal Roy corner. I recently donated a tattered shawl belonging to my father to the Chhatrapati Shivaji Vastu Sangrahalaya or Prince of Wales museum in Mumbai, and the director welcomed it. I don’t know who after me will preserve this priceless memorabilia.

The Bimal Roy Memorial and Film Society is also felicitating people behind the screen — editors, make-up men and technicians whose contribution is immense. These people are unknown and unacknowledged, their work too needs to be documented and recognised. We have lost so much of film history. What I have is worthy of any museum.

Bollywood has recently seen films with mainline stars themed on a social cause, and also a couple of big budget films on major politicians. Do you see this a doff of the hat to the cinema of the 1940s and 50s when socially committed filmmakers were aplenty?

Every generation has had socially committed directors. In the 1940s and 1950s, for example, biopics were a major trend, such as on Ramkrishna and on Vivekananda. One of the biggest among these was a biopic on Sant Tukaram Prabhat, these were inspiring sagas. The trend of films on political personalities was bound to happen too, for politics is very much a part of our lives and film-makers are profiling political leaders who are new heroes.

You are organising a retrospective on Nutan to mark her 83rd birth anniversary. Why Nutan and how did you select the films to be showcased?

Nutan is an extraordinary actress. Integrity and quiet charm are her signatures across 70 films. Whether it is Sujata or Mahjubi she persuades us to believe in the characters she portrayed. Naseeruddin Shah considers her “next to divine”. Tamil writer Ambad (C S Lakshmi) said about Nutan in my Bimal Roy biography that Sujata is connected to our national identity. She said, “It is difficult to forget Nutan’s luminous eyes in Sujata. Her eyes speak of atrocities and prejudices an independent nation has not wiped out. They remind us that a lot needs to be done.” Prime Minister (Jawaharlal) Nehru personally congratulated my father for Sujata after a special show at the home of the President of India. It was a challenge to choose from her vast body of work.

You have written a book and also made a film on domestic violence. You also spoke candidly about your own struggles at home. Are there now better forms of support for women?

Yes, that is correct. I edited Behind The Closed Doors for SAGE. Publishers did not want to touch it at first. I shot Char Diwari with two high profile individuals, the late Luku Sanyal, a familiar TV anchor and daughter of renowned Indian actor Pahari Sanyal and Flavia Agnes of Majlis to underline how prevalent domestic violence is across the class divide. There is no clarity or understanding how devastating family violence can be. The entire system — police, judiciary, victims — are in denial. As is the film industry.

06/02/2019 TV & Movies Comments Off on The memorabilia I inherited is worthy of any museum: Filmmaker-writer Rinki Roy Bhattacharya
India