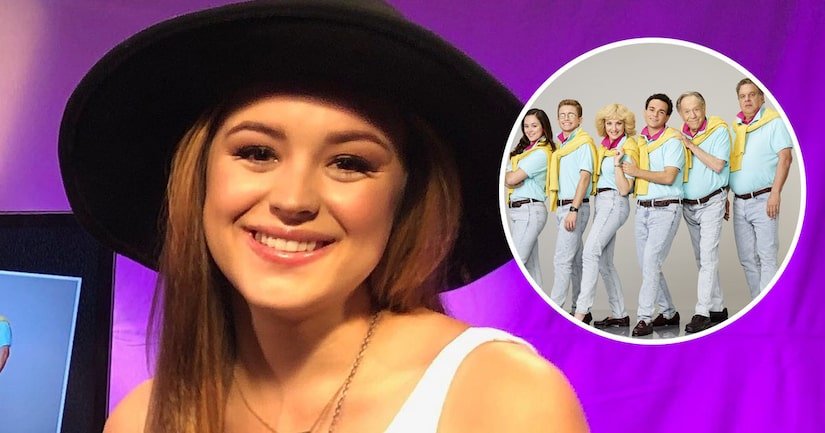 The actress also opens up about struggling to keep her cool around costars Wendi McLendon-Covey and AJ Michalka.

While one certain ABC star wasn’t thrilled their show was renewed, that certainly wasn’t the case with the cast of "The Goldbergs."

Though the sitcom — inspired by creator Adam F. Goldberg’s own ’80s experience with his family — was picked up by the network for a seventh season, star Hayley Orrantia said she started feeling a little nervous about its fate before the announcement.

"We were really hopeful for this one and not too worried, but it got to the point where all these shows were getting renewed and canceled and we’re like, ‘Okay well …’" she continued. "Finally we got it and I remember texting with like Sam Lerner and AJ [Michalka], so all very exciting and yeah, we’re super stoked. I hope we can go for many more seasons, but we’ll take one for sure."

During the season finale, Orrantia’s Erica Goldberg was accepted into college … again … after previously dropping out to pursue a music career. Her character’s brother, Barry (Troy Gentile), will also attend the same school, setting up a new dynamic for the two actors when the show returns.

"I’m so stoked, because that way I get to work more with Troy and it’ll be just something different," said Orrantia. "Like when my character went to college the first time, there were a lot of new storylines and characters we got to incorporate and it was just very fun, I’m looking forward to it."

In a running gag on the series, the characters sometimes drop a well-placed expletive, which are always censored. While Beverly (Wendi McLendon-Covey) gets the bulk of them, the writers have been generous with some of the other cast members. Orrantia said they’re always scripted and celebrated the fact "they were allowed one F-bomb an episode" when the series began, but "somehow, I think, we’ve worked our way up on certain episodes to a couple more."

"I think it’s hilarious. When Wendi does it, it’s hilarious and she does it so well," she added. "But whenever they give it to Sean [Giambrone] — who plays Adam — anyone where it shouldn’t be coming out of their mouth, it’s even funnier to me."

"I don’t know if I’ve even gotten an F-bomb in there yet, I’ve fighting for it," she then exclaimed. "I want an F-bomb!"

Being on the show has also allowed Orrantia to share her voice with a much wider audience, as the singer also performs regularly on the series. What began as a one-off song has turned into one of Erica’s biggest character traits.

"It’s funny because my character is not supposed to be musical at all and I had mentioned to Adam, ‘Hey I sing, if there’s ever a chance for a song to be in the credits of an episode or something, let me know,’" she explained. "I did not expect him to put it in the show and I think they tried it out Season 1 and I guess they enjoyed it, it went over well, was something new for the character.’

While she fakes her guitar skills — telling TooFab, "I’m not good, I’m not gonna be Carlos Santana by any means" — those vocals are all hers. And those duets with Michalka, of Aly and AJ, are a "dream" come true.

"AJ and I get to perform in The Dropouts on the show a lot, and for me it’s a dream because I grew up like loving her," added Orrantia. "12 year old me would be freaking out if she knew this was happening right now."

Check out the video above to see what else she said about working with Wendi and be sure to check out Orrantia’s new EP, "The Way Out," when it drops this Friday.

canceled or renewed? Over 15 Shows Were Canceled This Week — Are Your Favorites Safe?