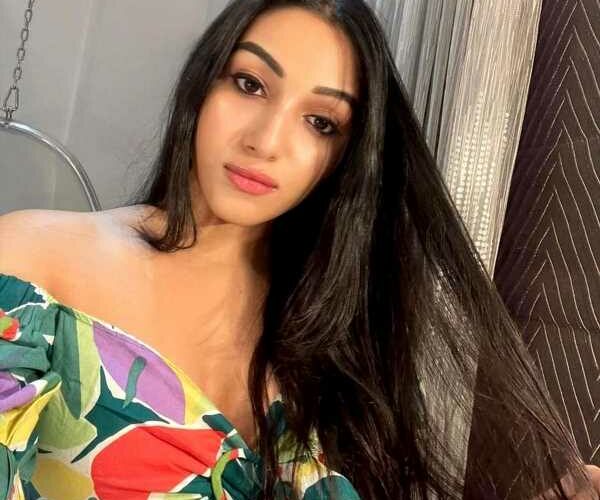 ‘The challenge for me was to make it believable that I was a girl from that era.’

Tanisha Santoshi is all set to make her acting debut in the kind of film she loves to be associated with: Gandhi Godse: Ek Yudh.

Directed by her father Rajkumar Santoshi, the actor makes a surprising comment about the way she landed the role.

“My parents were against me joining the film industry. My father actually said, ‘Don’t do this.’ When I asked him to consider me for this role, he rejected it,” she tells Rediff.com Contributor Mohnish Singh,

You are about to set foot in Bollywood with Gandhi Godse: Ek Yudh. How are you feeling?

I am very excited and, at the same time, a little nervous.

I am very excited for people to watch this film and give me their feedback.

Tell us something about the character you portray, and what was the most challenging part?

Sushma’s father’s last wish is that she gets to work with Mahatma Gandhi.

Somehow, she manages to work for Gandhi, and the story moves on.

She tries to help him in the new village that they are setting up.

She basically evokes a change within Mahatma Gandhi through the course of the film, and that’s how she contributes to the story.

Something within Mahatma Gandhi changes because of her part in the film.

The challenge for me was to make it believable that I was a girl from that era. 1948 was a totally different period.

To speak the Hindi of that era…

Working opposite theatre actors that are so good, I was nervous obviously. Was it your father’s wish that you become an actor, or was it yours?

My parents were against me joining the film industry.

I mean, I was very shy, so I never really told them until later.

My father actually said, ‘Don’t do this.’

When I asked him to consider me for this role, he rejected it.

So how did you convince him?

I asked me to take my audition.

He doesn’t believe in auditions.

He feels that when he sees a person, he can tell something about them.

I used to record some of my scenes and send them to him, and ask him to look at them.

I think what actually made him take me was the fact that I wanted to be a part of a film of this kind. Also, the part isn’t big but it had scope for performance.

There is no singing, no dancing, no glamorous scenes.

So I think he realised that this was something I wanted to do very seriously. Has the dream of direction taken a back seat?

No. At some point, I want to direct and write. That’s something I am extremely passionate about.

I am waiting for something to really inspire me to write on a specific topic.

It should not be just any film but it should speak about something.

It’s not a film that will be made again. What films of your father did you grow up watching?

I grew up watching all of his films, but the one I really like is The Legend of Bhagat Singh (2002).

They showed it at my school, and I felt so proud.

Another film that is phenomenal is Lajja (2001). It speaks about such a big problem in India. It was way ahead of its time.