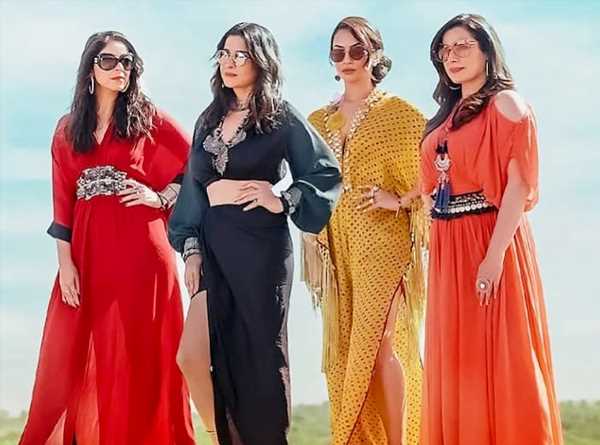 The spats and all the extra drama is generated for the series; the decibel level of the shrieking remains abnormally high, observes Deepa Gahlot.

The audience numbers must have been respectable enough for the powers that be at Netflix to commission a second season of The Fabulous Lives of Bollywood Wives, which, along with Indian Matchmaking, must be the most braindead show on the platform.

There are probably two kinds of viewers watching this series — those who have money but no taste, and want to see what the fashionable rich ladies are wearing, and those who see it as a guilty pleasure to be sniggered at later with their pals.

The show, inspired by The Real Housewives franchise in the US, has these four women — Maheep Kapoor, Bhavana Panday, Neelam Kothari Soni and Seema Kiran Sajdeh — who also happen to be friends in real life, meeting, chatting, bitching, partying, shopping, holidaying and doing what idle rich woman generally do: They spend money, earned by their husbands, or, if they have careers of some sort (mostly designing), then their own.

The show also gives a glimpse into their lavish homes, their hang-outs, their families, and their aspirations for their kids.

The slight problem that besieged the earlier show remains — the ‘wives’ are not exactly A-listers and their wealth would not even be a fraction of what the real super rich set flaunts.

Even though it is a Karan Johar production, maybe they could not get different participants for the second season.

Or it could be that except for Shah Rukh Khan’s stable marriage with Gauri (the patron saint of Bollywood wives, who strides in like a queen), the other major male stars are either unmarried or divorced, or have wives who are stars themselves, so they would not fit into the mould required for the show.

What Season 2 does is make the earlier bimbo conversations somewhat serious — it’s not often that women discuss menopause and hot flashes on screen and then go see a gynaecologist (Dr Kiran Coelho) to talk about their doubts and fears and the possibility of designer vaginas (Neelam cannot bring herself to say the word).

Seema talking to her son about life after breaking up with her husband (Sohail Khan) is actually moving.

All the seemingly casual dining table conversations are obviously scripted because it’s not as if the Kapoor kids don’t know how their parents met; Neelam (who used to be an actress) and her actor husband Samir Soni hilariously discuss kissing on screen, the Panday kids go ‘eww’ when their parents talk of renewing their vows (which they do on the show).

The spats and all the extra drama is generated for the series; the decibel level of the shrieking remains abnormally high.

The sculpted hottie du jour (Michelangelo’s David with more abs, Maheep comments) is quite comfortable with this reaction though women who belong to the film industry, directly or indirectly, would hardly behave like teen fans.

Or maybe they would.

Maybe that is the hidden point of the otherwise futile show, under the designer outfits and ‘bulletproof make-up’ (as Seema’s war paint is called by her son) they are women like any other, the same fears, insecurities, sorrows and joys. Their lives just have a better quality of banality because they can afford luxury and glamour.

The Fabulous Lives of Bollywood Wives 2 streams on Netflix. 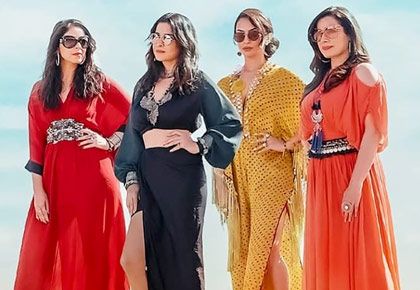