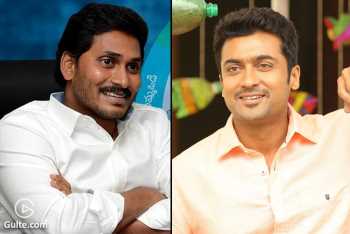 Suriya shares a special bond with YS Jagan Mohan Reddy and YS family. As Jagan is all set to sworn-in as the second Chief Minister of AP, Suriya recalls his association with YS family.

“I always call him as Jagan anna. Jagan Anna’s cousin Anil Reddy was my classmate and my best friend. We always used to go out in Chennai and have ice-creams. That’s how I got close to Jagan Anna’s family. Ten years ago what happened was a huge loss to their family and to the state. After ten years of hard work, he has reached the position. He had extensively done Padayatra. Finally, he got a resounding victory. People shown their love on Jagan anna and it’s evident with the result. I was very happy when I came to know about his victory. He is the second youngest CM in the country. I hope he will deliver good governance.

Ask him whether he will play the role of YS Jagan in his proposed biopic Yatra 2. Pat comes reply from Suriya. “Of course, if the script and the team is in interesting, I am ready to play Jagan anna on screen. But no one has approached me so far.”

Suriya is very confident about his upcoming political drama NGK directed by Selvaraghavan. He said NGK has no direct references to any politicians or political parties or political families. Yet, Suriya said that the film deals around contemporary politics.