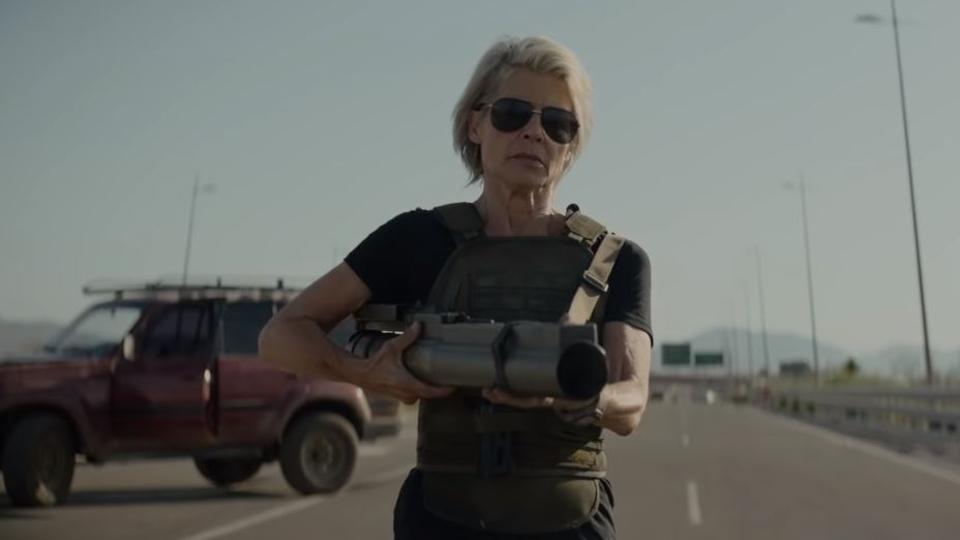 The trailer of Arnold Schwarzenegger’s Terminator: Dark Fate trailer is out and marks the return of Linda Hamilton as Sarah Connor to the silver screen. The nail-biting trailer shows the fearless Mackenzie Davis being joined by Linda to protect Dani Ramos (Natalia Reyes) from the deadly Terminator played by Gabriel Luna, who has arrived from the future to kill them. And of course, Arnold returns as T-800 Model 101, to help the women in their fight the homicidal robot.

The film which is a sequel of 1991’s Terminator 2: Judgment Day, is helmed by Tim Miller and produced by James Cameron. Dark Fate also marks director James Cameron’s return to the Terminator franchise.

A direct sequel to The Terminator and T2: Judgment Day, it ignores Terminator 3: Rise of the Machines (2003), Terminator: Salvation (2009) and Terminator: Genisys(2015). The three films were not considered up to the standards by fans and Linda alike. “They’re very forgettable, aren’t they?” she said at CinemaCon in April. “I wanted them to be good. You start something and you’re invested in the franchise, but somehow the characters that you care about weren’t there. Too many people, too many story points and the focus of just a few people that you’re rooting for. So I think we’ve done a good job of narrowing down the focus again so it will echo the first two films,” Hamilton added.

Though she was happy to play Connor again, Linda hesitated to return back to the film at first.”I gave it probably six weeks of intense thinking and consideration before deciding to do it. I wasn’t sure if I wanted to. I didn’t want it to look like a shameless money grab. I am living this quiet, lovely life that doesn’t involve being a celebrity, and you really have to think, do I really want to trade that in again for another 15 minutes? ,” she said.