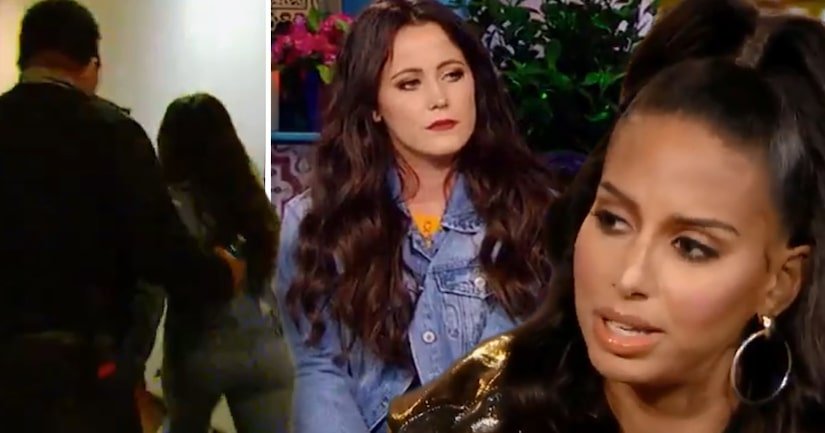 “F–k everyone, get me the f–k outta here,” exclaims Jenelle after this fiery exchange.

When Jenelle walked out, the first item Nessa brought up was Evans’ anger toward Amber Portwood, after the fellow "Teen Mom" star bashed David Eason on Instagram Live. Jenelle was upset Portwood took her beef public, instead of reaching out to Evans personally.

Evans explained why it ticked her off, but that wasn’t really what Nessa wanted to talk about. Instead, she used the incident to call Jenelle a hypocrite.

"I think that’s really interesting because you did exactly that to me," said Diab, drawing a comparison between what angered Jenelle about Amber and something Evans said about Diab’s own boyfriend on social media.

"You posted hateful comments on social media about my family, about my man Colin Kaepernick," said Diab. "You knew that."

"I posted them? When did I post it?" asked Evans, clearly caught off guard by the turn in the conversation.

As Jenelle continued to play dumb, Nessa came through with the receipts, sharing screenshots of Evans’ posts. Below are the posts in question, shared to Jenelle’s personal page and still very much live:

"I’ve never seen that," Evans said as it flashed on the screen. "I honestly have no idea who your boyfriend is, or husband …"

"He’s been on set. This is an open, healthy conversation I would like to have with you," Nessa shot back. "Please understand something. My man used his platform to peacefully protest systemic oppression in this country, specifically police brutality against black people. Men, women and children dying, wrongfully dying, and people who are doing this are not being held accountable. That is the issue. It has nothing to do with military men, military women, okay? Because they fought for our constitution to peacefully protest. I would have appreciated if you had contacted me. I would have been more than happy to have a healthy conversation."

Kaepernick sparked a wave of protests and a political firestorm when he first knelt during the national anthem back in 2016 to raise awareness against racial inequality, police brutality and other social issues. Jenelle’s posts came after he secured a campaign with Nike in 2018.

As she stormed out, Nessa kept talking. "You did something that was very hypocritical and instead of having a healthy dialogue right now, you’re lying," she said as Evans made her way backstage.

"I’ve known Jenelle over the years and I’ve always been fair and just," Nessa then explained to Dr. Drew and the studio audience. "It wouldn’t be authentic to who I am to be on this stage while someone had disrespected my family on social media. I at least have to address that."

Dr. Drew agreed with her decision.

"I would have loved to shared educational resources with her," Nessa added. "I think it’s important for everybody to learn from the situation."

While that was where the episode ended, a preview for Part 2 of the reunion shows she does come back out on stage. That’ll air next Monday on MTV.