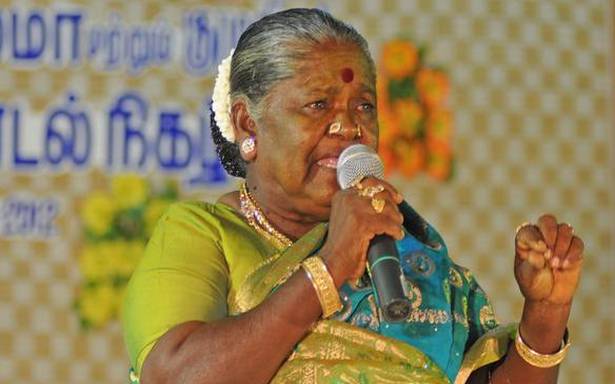 Folk singer and actress Paravai Muniyamma died in Madurai on Sunday. The octogenarian had been suffering from age-related ailments for a few years now.

She shot to fame in 2003 with her role in the film Dhool, in which she starred alongside actors Vikram and Jyothika. Her song Madurai veeran became a huge hit and she went on to star in several Tamil films. Among her other memorable onscreen appearances was with actor and comedian Vivekh in the film Kadhal Sadugudu. She also starred in Kovil, Devathaiyai Kanden, Thoranai and Thamizh Padam among others.

As a folk artiste, she also gave several performances abroad. In an interview with The Hindu in 2004 she had said – “My overseas programmes stand testimony to the fact that human race has an unquenchable passion for folk art and culture. Folk songs cannot be withered away by disco, jazz or rock”.

She also had a successful stint on television with her rustic cooking show in which she showcased several traditional recipes.

Following reports about Paravai Muniyamma’s ill health and financial woes, former Chief Minister and AIADMK general secretary Jayalalithaa had announced a financial assistance of ₹6 lakh and a monthly aid of ₹6,000 to her in 2015.

In March 2019, she was honoured with the Kalaimamani title by the Tamil Nadu government.