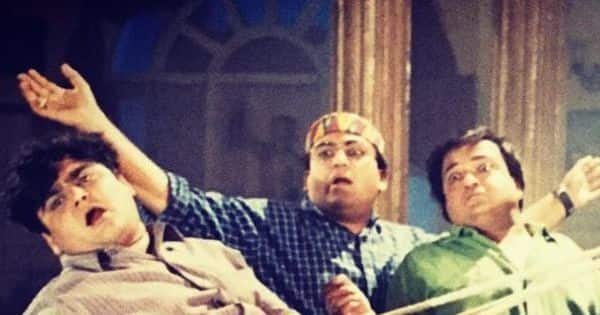 Taarak Mehta Ka Ooltah Chashmah is undoubtedly the most watched comedy shows. The show has completed 12 years and still never fails to impress us with some exciting episodes. It won’t be wrong to say that it is the only show to have no haters even after being the longest running show. Recently, the show became the second Hindi GEC after Yeh Rishta Kya Kehlata Hai to have completed 3000 episodes. Dilip Joshi aka Jethalal has been in the show since the start. It had been 12 years we are watching him doing the role and we cannot imagine anyone else playing Jethalal. Dilip Joshi recently made his debut on Instagram and since then we are seeing some really amazing posts by him on social media. He posted a throwback picture with Deven Bhojani and Rakesh Bedi from their show, Hum Sab Ek Hain. Dilip Joshi played the role of Sohan Khachroo in Hum Sab Ek Hain.

However, it is Dilip Joshi’s caption with the picture that grabbed attention. He twisted the context of the picture to today’s time. He wrote, “2020 in a nutshell. Just joking 🙂 Corona ke khilaaf ‘Hum Sab Ek Hai’ #memories #throwback #sonytv #neelatelefilms #oldschool” Take a look at the post here:

Taarak Mehta Ka Ooltah Chashmah director Malav Rajda commented on the post and wrote, “Was one of my favorite shows”. Dilip Joshi has done many shows like Yeh Duniya Hai Rangeen, Sewalal Mewalal, Kora Kagaz and others. He has also been a part of many movies. Earlier, Dilip Joshi spoke about the foul language used in web shows. He was on Sorabh Pant’s YouTube podcast when he spoke about OTT content. He said, “On OTT platforms, we can see some mind-blowing work. There are some great performances. But I feel that there are a lot of expletives used when they are not necessary. Like I saw Bandish Bandits recently and it was wonderful. It had wonderful performances and Shankar, Ehsaan, and Loy gave superb music. But there is one character in it who is himself not comfortable to give gaalis. That was really funny. I don’t know if they have a clause to have cuss words. Without that also, you can do great work. Like Raj Kapoor ji, Hrishikesh Mukherjee ji and Shyam Benegal ji have done timeless work. They didn’t feel the need to include gaalis.”