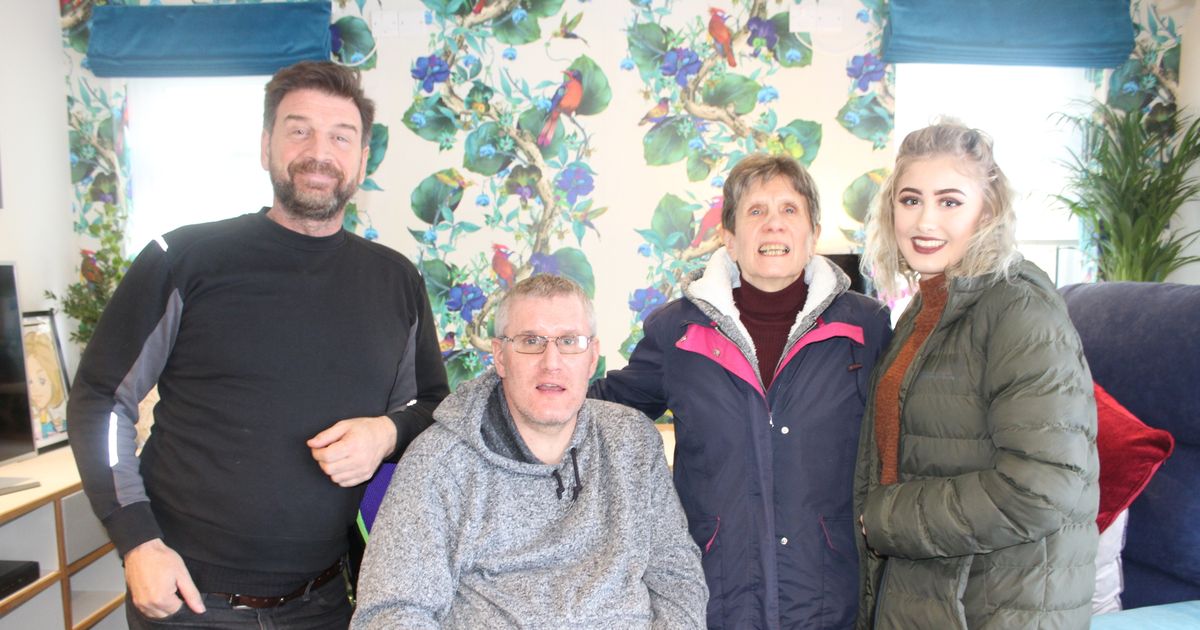 Devoted father and daughter, Stuart and Lauren, are the centre of each other's world.

Their bond is incredible and with the help of Stuart's mum, Lynn, the family is unbreakable.

But the trio are battling problems most of us would barely be able to cope with.

While he remained as active as possible when she was a child, in the last five years Stuart's condition has deteriorated dramatically.

He can no longer move his legs and has only limited mobility in his arms.

But he is Lauren's world, and she his, so Stuart's biggest fear is having to move out of his home in Torquay and into a care home.

The 47-year-old receives some home help but the person who helps most with her care is his devotd mum, Lynn.

She, along with Lauren, do what they can for Stuart, who refuses to give in to his condition.

But Lynn is 73 and faces a difficult challenge of her own – she is blind.

Every day she walks, alone, from her own home to her son's to offer him all the care she can.

But the home Stuart shares with his teenage daughter has become a prison for him.

He can rarely get outside because the doors are too narrow and he hasn't been able to sleep in a bed for the last two years.

Instead, Stuart has to spend every night in a chair in his living room because he can't get upstairs.

And caring for him is taking its toll on the two women in his life.

Lauren says: "I do feel lonely at times. I want to see my dad get some of his independence back and that will make me happy."

And since Stuart's condition has deteriorated, Lynn has admitted she struggles with anxiety before she travels to his house every day.

She said: "I never knew what I was going to find when I got there."

Stuart's home help wanted to do anything she could to make the family's life easier and contacted BBC's DIY SOS team.

Nick Knowles and the gang agreed to take on the challenge to completely transform Stuart's home.

And they're being joined by a hoarde of people from the family's community who want to do all they can to help.

Not only do they plan to make it easier for him to get around, they also want to create a flat within the house so Lynn can move in to ease some of her anxiety and mean she's on hand for her son and granddaughter.

Stuart says: "The whole of Lauren's life I have tried not to let my illness interefere with her growing up.

"But I don't know what will happen or if I will be around to watch my daughter grow up.

"My main concern is ending up in a care home as I wouldn't be able to look after my daughter.

"I can't do physical things for her but emotional support – I'm there 100 percent."

However, the team face one major problem – they can't extend the property.

They have to transform the small home into something that works for three generations of one family without changing the footprint.

Undeterred, out come all all the walls but one.

And despite running into problems, including electrical issues, rotten floors and being hughely behind schedule, nine days after work started the home is unrecognisable.

The front garden has been completely transformed and now has easy access to the new front door, which is also in a new position.

Gone are the rooms downstairs and in their place is an open plan living room and kitchen.

Lynn also has her own flat with a bedroom, bathroom and even her own kitchen.

There is now a lift so Stuart can finally get upstairs and sleep in a special bed, perfect for his size.

He also has his own wet room so he can once again wash with dignity.

Lauren also has her own stunning space, with her own private bathroom.

Outside has also been completely revamped and Stuart is finally about to go outside and feel sun on his face for the first time in years.

Lauren and Stuart are both overwhelmed by their new home and the huge difference it will make to all their lives.

Lynnn says: "Stuart can stay in his own home for the rest of his life.

"That was my greatest fear, that in a few years time he would have to go into a care home and that's the last thing I wanted."