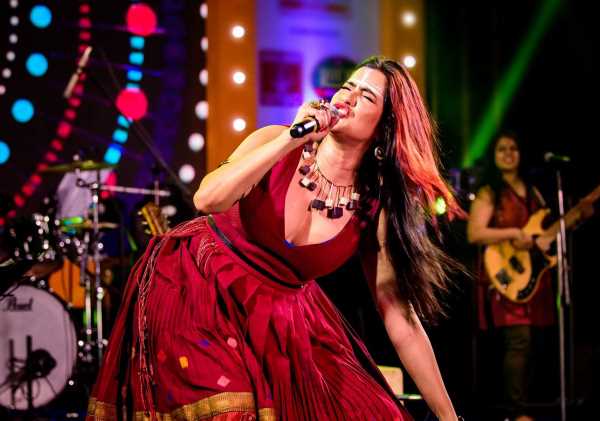 Shut Up Sona is about one woman refusing to be silenced, notes Deepa Gahlot.

Sona Mohapatra works in an industry that is unapologetically misogynistic.

So like other women in show business, she is expected to be grateful for the opportunities she gets, and avoid raising her voice about the inequality and exploitation she sees around her.

The title of Deepti Gupta’s documentary about her is Shut Up Sona because, well, she just won’t shut up.

The now celebrated documentary premiered at the MAMI Film Festival in 2019, made the rounds of film festivals, won awards and now makes its way to the film viewing public on ZEE5.

They deserve to get a glimpse of the ugliness behind the glamour industry; to understand that an artiste can choose to assert herself, and be willing to pay the price.

Sona spoke up when she found that female singers were not being invited to perform at music festivals, the excuse being there aren’t any.

She created the hashtag #IExist and contacted all the female singers she knew to join in, and let organisers know that they exist. Not a single one responded because, in an intensely competitive profession, why rattle any cages?

At the end of the film, there is surprising information.

In 2018, IIT Mumbai had one female headliner out of 15 performers.

NH7 2019 did have more female singers but Sona Mohapatra was not invited. And even if women are included in the line-up, they are given less time and smaller stages.

There is a lot to be angry about.

Sona co-produced the documentary with her husband, composer Ram Sampath, and Deepti Gupta.

As one of the first female cinematographers in the film industry, Deepti must have witnessed the sexism first hand.

The film-maker followed her subject for three years, accompanying her on her travels, capturing her at her concerts, as well at home in quieter moments.

Sona was at the forefront of the #MeToo movement in India, when she called out Anu Malik for sexual harassment, and the composer was removed as a judge for the reality show Indian Idol, but, predictably, reinstated soon enough, while she was dropped as a judge for the music show Saregama.

She pulled up Sachin Tenduklar for endorsing the new edition of Indian Idol with Anu Malik.

‘Dear Sachin,’ she tweeted, ‘Are you aware of all the @IndiaMeToo stories of multiple women, some minors who came forward in the public domain about Anu Malik, the judge in the same Indian Idol show last year, including their own ex-producer? Does their trauma not matter or touch anyone?’

It’s not part of the film but she had also criticised Salman Khan for his casual comment on rape, when he compared his battered condition during Sultan‘s wrestling shoot with that of a raped woman.

Sona was trolled and given death threats by the star’s fans.

That is the typical troll response to strong and articulate women, but there was also a male singer who told her husband to control her.

Ram Sampath gently tells her that in the pursuit of her activism, she must not forget that she is a performer first.

But how is a performer to react when bigots attack her for dressing inappropriately when singing a Sufi song or a Mira bhajan?

In the film, she visits the Amir Khusro shrine, where the male qawwals tell her that women are not allowed to make offerings or perform there.

She does get them to sing with her, a moment that creates a kind of magic.

In the short while since the production of Shut Up Sona, things have only gotten worse: There is no room for debate, little support for any anti-establishment stance, as the world regresses into conservatism.

Shut Up Sona is about one woman refusing to be silenced.

By now, she should have been a bigger music star than she is, and also joined by a thunderous chorus of protest.

Shut Up Sona streams on ZEE5.