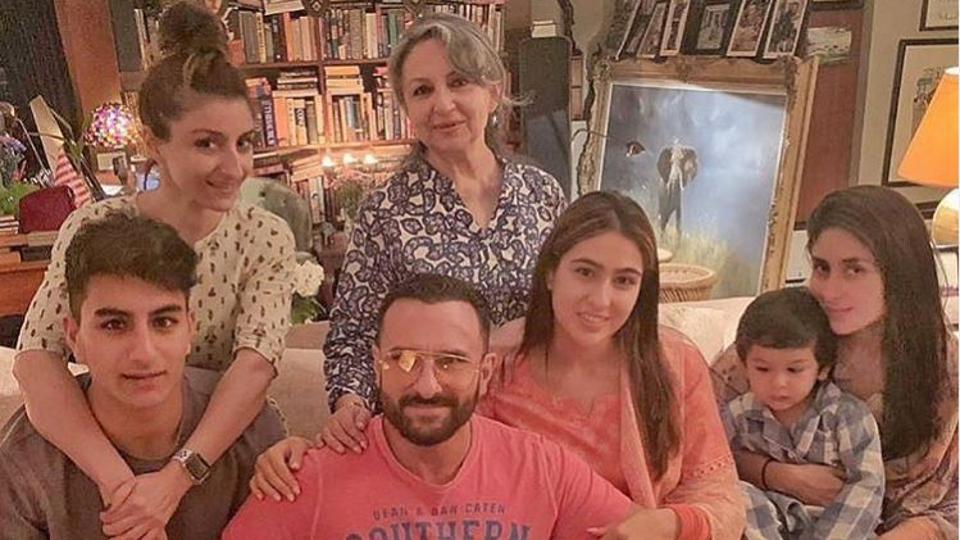 A family picture of actor Sharmila Tagore with daughter Soha Ali Khan and son Saif Ali Khan, his children Sara Ali Khan, Ibrahim and Taimur, as well as wife Kareena Kapoor Khan was shared by Soha on Wednesday. The picture was loved by their fans but had a few members of the family missing in the frame. Sharmila has now opened up about why they could not make it to the epic family portrait which was clicked at Saif’s residence in Bandra.

Talking about the missing members of the family in the picture, Sharmila told Mumbai Mirror in an interview, “Taimur was getting agitated so we wrapped up by 9.30-10 pm as get-togethers now depends on the kid’s schedule.” She added that Soha’s daughter Inaaya had already dozed off and her husband Kunal Kemmu was unwell and therefore, opted out at the last minute. Talking about her other daughter Saba, the veteran actor said that since she is fasting, she doesn’t like going out after breaking her fast.

Sharmila also revealed that Saif even cooked dinner for them that included quinoa salad with cherry tomatoes and avocados, a mushroom and broccoli dish and a roast chicken on the menu.

Like the branches of a tree ❤️ #family #familygoals #missingafew @saraalikhan95

The picture showed three generations in the frame which Soha described in the caption, “Like the branches of a tree #family #familygoals #missingafew.” While Sharmila and Soha are seen standing behind the sofa, Saif is seated with Ibrahim on the left and Sara on the right. Kareena is on the extreme right with son Taimur on her lap. The little one looks sleepy in black-and-white pyjamas.

A friend had asked in the comments section of Soha’s post, “Where is your princess?” to which Soha replied, “it was past her bedtime.” A fan reacted to the picture saying, “This is so soothing to the Eyes.” Another wrote, “Nice family and Saif looks the youngest!!” Many of Soha’s followers also enquired about the books in the background and the missing family members.