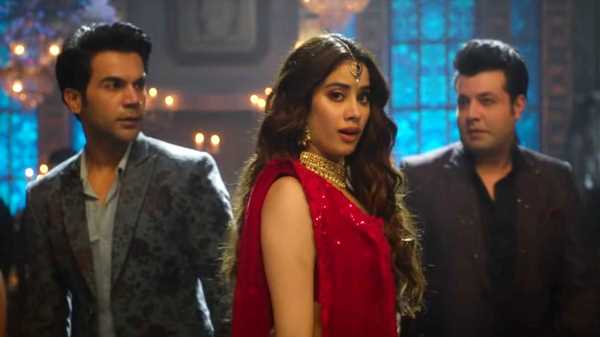 As a self-confessed scaredy-cat, I have to say I was dreadfully exhausted by the end and noting the sloppy visual effects and continuity glitches in Janhvi’s ghostly makeup, points out Sukanya Verma.

Small towns, supernatural myths and a silly set of men entangled around a seemingly spooky woman — Roohi‘s eagerness to capitalize on Stree‘s success is as obvious as it is regrettable.

Producer to both, Dinesh Vijan aspires for a horror comedy universe around these keywords but Roohi, previously titled Rooh Afza followed by Roohi Afzana can neither match the wacky vision nor the feministic vigour of Stree.

Opposing patriarchy through chilling heroines is a trending new ploy in films like Stree, Pari and Bulbull. Roohi, too, claims to share their ideas of empowerment but the execution is so wishy-washy, it feels tokenism at its most contrived.

Director Hardik Mehta whose Amdavad Ma Famous and Kaamyab gave us a good glimpse of his canny talent tosses an occasional quirky visual. but his garbled treatment of Mrighdeep Singh Lamba and Gautam Mehra’s wafer-thin plot and worn-out formula relies entirely on its its likeable cast to salvage the situation.

But when Roohi transpires into more than what they bargained for, all hell breaks loose.

Mandatory town folklore goes — a chudail figure, feet backwards of course, lurks around wedding sites in hope of finding a bride to possess if ever the groom slips to catch his forty winks.

Roohi isn’t as keen to explain its myths or mental make-up as it wants to send Bhawra on a stammering spree or show-off its playlist of retro Bollywood numbers against a smitten Kattani.

Both fellas respond to the Roohi they see and crush on even as the lady in question alternates between mouse and monster. Freeing one from the other forms the objective of their increasingly confusing and outrageous quest.

A fair bit of its pedestrian humour works on the strength of Rao and Sharma’s comic prowess. It’s not novel territory for either, but the duo is committed to enjoying the farce for what it is. Janhvi reiterates her compelling presence but doesn’t get any meat to chew on.

Though watching talented actors embarrass themselves in scenes that wouldn’t seem out of place in a Housefull 5 is a real deal breaker.

Between relentless assault of red herrings and jump scares and mumbo jumbo of temples, healing babas and all-knowing crones, the monotony of boos and exorcism becomes impossible to bear.

As a self-confessed scaredy-cat, I have to say I was dreadfully exhausted by the end and noting the sloppy visual effects and continuity glitches in Janhvi’s ghostly makeup.

Returning to the theatre exactly a year later in a post-pandemic world is unnerving enough without having to endure the hopeless horrors of Roohi. 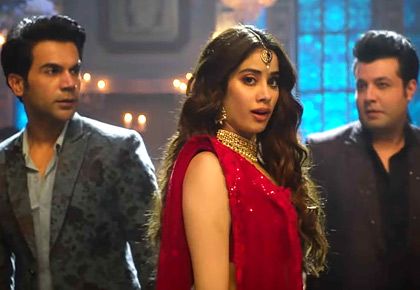