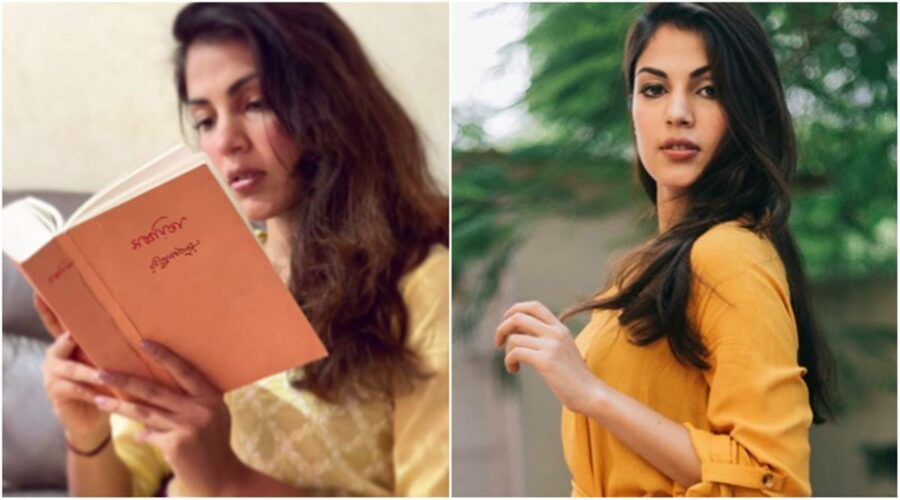 Rhea Chakraborty has left her fans inspired with her recent social media post in which she is seen reading Rabindranath Tagore's Gitanjali. Actor Rhea Chakraborty has grabbed attention yet again, but this time for her thoughtful Instagram post. The actor posted a picture of herself in which she is seen reading Rabindranath Tagore’s Gitanjali.

Sharing the picture, in which Rhea’s face is a little blurred out, the actor quoted a line from the book which read, “The question and the cry ‘oh , where?’ melt into tears of a thousand streams and deluge the world with the flood of the assurance, ‘I AM!’ – Rabindranath Tagore, Gitanjali.” She ended the note with a hashtag that read, “keeping the faith.”

As soon as she posted the picture, a lot of her well-wishers sent her good luck in the comment section. “Nice to see you taking life in true spirit. Wish you good luck always,” wrote one of her fans. Another fan shared, “You are inspiration for girls like me. Keep rocking. More power to you.” One of her Instagram follower wrote, “Stay strong and always keep faith. Sab thik hoga.”

Siddhanth Kapoor, Arjit Taneja, Shibani Dandekar and others also posted heart emojis in the comment section of Rhea’s post. In March, Rhea had shared a photo with her friend Nidhi Parmar Hira. She wrote “Love is power” while quoting Rober Fulghum.

On the work front, Rhea will soon be seen in Chehre, which stars Amitabh Bachchan and Emraan Hashmi in the lead. However, the makers refrained from promoting her.

Talking about Rhea’s absence, Chehre producer Anand Pandit said that while the public scrutiny never affected his decision to retain the actor in the film, he knew the media attention could take a toll on Rhea if she participated in public engagements for the film.

“A lot of issues have happened in Rhea’s life over the last one year. I never wanted to give another turmoil to her… till the time she is not comfortable (promoting the film). For my project or benefit, I don’t want to create ripples in somebody’s life,” stated the producer.

The film was supposed to release on April 9. However, due to rise in the coronavirus cases in Mumbai, the theaters have been shut yet again.

04/11/2021 TV & Movies Comments Off on Rhea Chakraborty is ‘keeping the faith,’ fan says ‘Nice to see you taking life in true spirit’
India