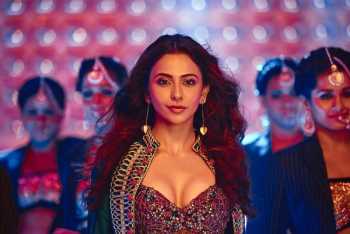 After Spyder debacle, Rakul Preet is missing in action in Telugu. Although she is seen in a guest role in NTR : Kathanayakudu as Sridevi, even the film failed to do magic for Rakul as well as the producers. Since then, Rakul is not seen in Telugu.

Of late, she is busy in some Tamil films and notable Hindi films including her latest release De De Pyaar De. While she returns to Telugu with Telugu-dubbed Tamil film NGK, Rakul Preet responds on her “long gap” in Telugu.

“There is no special reason as such. There are only 365 days in a year. When you’re working in various languages, gap is common. This year, I will have six releases including Hindi, Tamil and Telugu.”

Meanwhile, Rakul has only one straight Telugu film i.e Manmadhudu 2. And Rakul is really excited about the film as she is acting alongside Nagarjuna. She said her role in Manmadhudu 2 will be new, young and different. Looks like, Rakul is pinning high hopes on Manmadhudu 2 that it will get her back into limelight in Telugu.