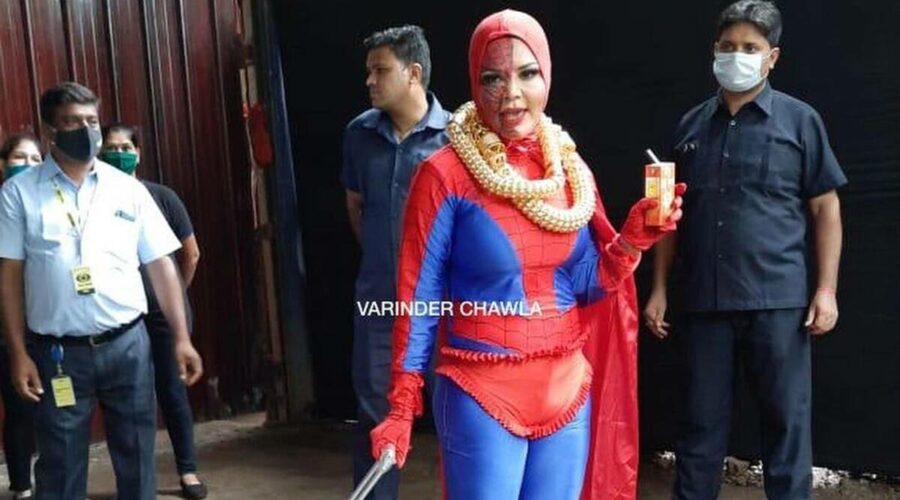 Rakhi Sawant has one of the most entertaining contestants in the history of Bigg Boss. On Tuesday, she transformed into a desi spider-woman and demanded a seat on Bigg Boss OTT. Trust Rakhi Sawant to have one quirky antic or the other up her sleeve. This time, she transformed into a desi spider-woman and left paparazzi clicking furiously. Yes, Rakhi decked up in blue and red and roamed the streets of Mumbai asking ‘Bigg Boss’ to invite her on the show.

Bigg Boss OTT is currently streaming on VOOT, and Rakhi Sawant seems to be missing the show a bit too much. Speaking to photographers, Rakhi said that she wanted to be on the show again and wanted Bigg Boss to call her back. As usual, her audience couldn’t stop commenting about her.

While some hailed her for her “confidence”, others said they wanted to see her back on Bigg Boss. In fact, her Bigg Boss 14 housemate Aly Goni said that Rakhi should be the new Bigg Boss. “#WeWantRakhiAsBiggBoss! Baat Khatam,” Aly commented on one video of her.

Rakhi Sawant, known as one of the most entertaining contestants on Colors reality show, first participated on Bigg Boss in its first edition in 2006. She returned to the show after 14 years, as a wildcard entry on season 14. Rakhi’s entertainment quotient clearly didn’t age as she went on to be one of the finalists and also ended up taking home Rs 14 lakh during the finale earlier this year.

Meanwhile, Bigg Boss has debuted its digital version this year, with Bigg Boss OTT, which is being hosted by filmmaker Karan Johar. The finalists from this six-week-long show will join other contestants in Bigg Boss 15, which will be hosted by superstar Salman Khan. It will air on Colors.