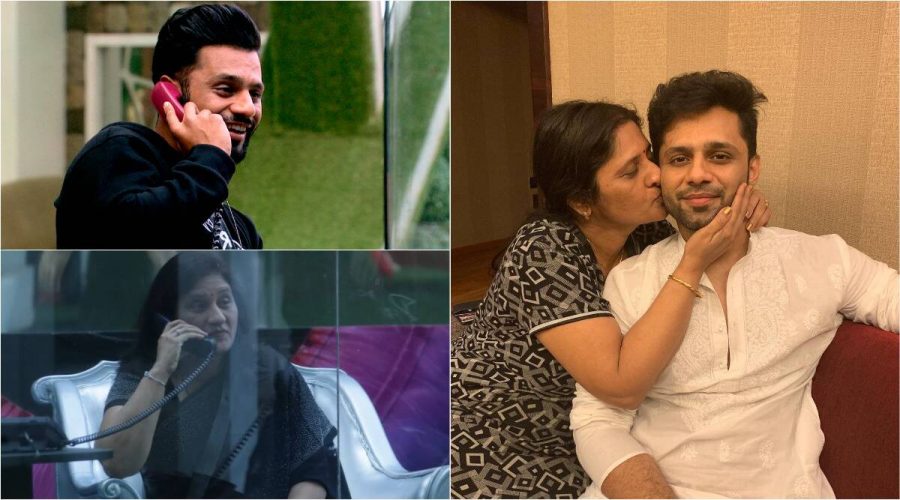 Bigg Boss 14 contestant Rahul Vaidya's mother Geeta Vaidya talks about the experience of visiting her son in the house, his game and preparing for his wedding. The Family Week of Bigg Boss 14 started on Thursday. And the first contestant to get a chance to meet their loved one was Rahul Vaidya. The singer got a pleasant surprise from his mother Geeta Vaidya, and the two were seen sharing some emotional moments.

After exiting the Bigg Boss 14 house, Geeta spoke exclusively to indianexpress.com about her experience. Sharing that a lot of the time from the short meet went in crying, she added that it was difficult to control her emotions, seeing Rahul after so long.

“We had been waiting for the family week for a long time. Everyone on the set was excited about going in to meet the contestants. And I am sure the contestants too were very happy seeing their family after a long time. We have never stayed away from Rahul for so long, and that too without any connect. It has been a difficult time, and to be able to just talk to him made my day,” shared the loving mother.

Geeta Vaidya revealed that she cried a lot when Rahul Vaidya was set to enter the house, and given the covid scare a few months back, he too was concerned about their safety. Calling him a responsible son, his mother mentioned that he has been worried about his parents. In her visit, she assured him that everything is well outside and that provided him relief.

Geeta also told Rahul that they have already started his wedding preparation. As readers would know, the singer had professed his love to actor Disha Parmar on the show last month. Geeta shared that while the family had no inclination about his relationship, they are excited about the match.

“Disha has been to our house like a lot other female friends, but he never told us she is special. I think once he was on the show, he realised how important she is to him. We are happy with whatever he decides, and are really looking forward to seeing him tie the knot,” said Rahul’s mother. She also shared that she passed on Disha’s message to him, which mentioned that he is doing really good, and that she is missing him.

Talking about Rahul Vaidya’s performance in Bigg Boss, the happy mother said that she loves watching him bond with Aly Goni. Given they are of the same age, she said that their friendship is very real, and adds the fun element in the show. “As for the game, he has been doing really well. I think after he came back, he has become stronger. However, the challengers keep fighting, and that takes up most of the screen time. I wish we could see him more,” she added.

Sharing that the family was also quite shocked when Rahul decided to walk out, she feels her son went through a lot before taking the big step. For Geeta Vaidya, it’s not easy to judge the reality of the house in just an hour one sees on television. “He was so lonely, and I am sure he was hurt, and thus decided to walk out. We did not want that, and were happy to see him back,” she mentioned.

The emotional mother further shared that she has never seen Rahul Vaidya get angry or fight before. While she gets upset and scared, she feels that the show requires one to take a stand. And she could not be any prouder to see her son speak for the right. She also mentioned that most of the time Rahul speaks her heart’s saying, and that makes her jump with joy.

About the time she got to speak with Rahul, albeit through a wall glass, Geeta Vaidya said that she tried to brighten up her son’s day with some positive words. While she appreciated his bond with Jasmin and Aly, she also mentioned how she never understood Eijaz Khan’s game.

Going back in time, the proud mother said that her son had enjoyed a lot of fandom after being a finalist in Indian Idol. And now, history is repeating itself with Rahul trending multiple times on social media. Stating that she has no words to express her joy, his mother said that they are positive that Rahul will emerge as the winner.

And on a concluding note, on quizzed who else she feels would reach the finals, Geeta Vaidya remarked, “Rubina and Jasmin.”

01/08/2021 TV & Movies Comments Off on Rahul Vaidya’s mother: Passed on Disha’s message that she is missing him
TV & Movies