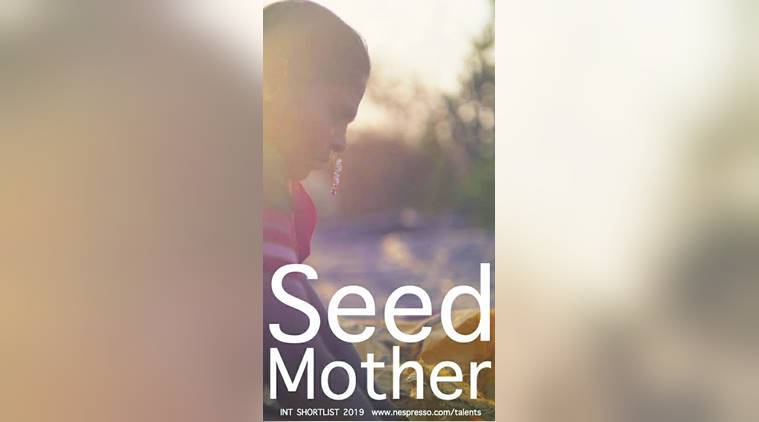 The drought that has hit several parts of the state has affected Popere’s work too. “If we had access to water, I would be able to sow many more seeds. But we don’t even have water to drink,” she says. SHE WAS trying to find out why her children and others from her village were falling ill. How Rahibai Soma Popere turned it into a crusade for native seeds at Kombhlane village in Ahmednagar district is the story of Seed Mother, a three-minute short by a city-based film-maker that won the third prize in the international section of Nespresso Talents 2019 at the 72nd Cannes Film Festival on Friday.

Popere says she has not seen the film by Achyutanand Dwivedi. “We don’t have a TV,” she tells The Indian Express over the phone from her village, but she knows the value of what she is doing.

“Bakshish bhaari pan tyacha peksha kaam bhaari (Awards are good but my work is better),” she says. She was a child when her mother died and she was raised by her father, a farmer.

“He gave me the only knowledge that he possessed. He took me around the farm and taught me about native seeds and how to plant them. Later, like everyone else, I too began using hybrid seeds. It was only after my sons and their kids started falling ill that I realised something was wrong with what we were eating. I felt it was the hybrid seeds and the use of pesticides and fertilisers,” she says. Popere decided to go back to what she had learnt as a child. Two decades ago, she began preparing indigenous seeds, and began distributing them to two self-help groups.

“Each had 11 women. I would distribute the seeds to them, to relatives and even as a return gift after haldi-kunku programmes. Others in the village would see me with a basket of seeds and ask about it,” she adds.

Soon, she came to be known as a beej mata. She says she has nearly 200 types of seeds, including pulses, 30 types of vegetables, 11 varieties of rice and medicinal plants, among others.

The drought that has hit several parts of the state has affected Popere’s work too. “If we had access to water, I would be able to sow many more seeds. But we don’t even have water to drink,” she says.

She also blames the shift to hybrid seeds as one of the reasons for farmer suicides. “Farmers take loans to buy them as well as the fertilisers to grow them. Eventually, the produce reduces as the seeds weaken our land. With no money to repay the loans, it becomes difficult for farmers to sustain. They must be helped by showing them the advantages of indigenous seeds and this needs to be done at a state level by the authorities, so that there is sustainable development for the next generation,” Popere adds.

She now has 3,000 women working with her and gets visitors from across the country. “At one point, there were many awards but my house was so small that there was no place to keep them. Even for students who would visit, only five could enter at a time to hear me talk about the seeds. I had told Chandrakant Dada Patil (state minister) about this and I got space to build a bigger home.”

Dwivedi, who was in Cannes to receive the award, said he stumbled upon Popere online. When he learnt of the theme for the Nespresso Talents short film contest in Cannes this year — ‘We are what we eat’ — he knew his entry would be a film about Popere.

“She was open and cooperative as she wants to reach out to more people with her message. As soon as I come back, I will get in touch with her to thank her. She is a great inspiration. What she says makes complete sense; it is time we go back to how farming was done in the past.”