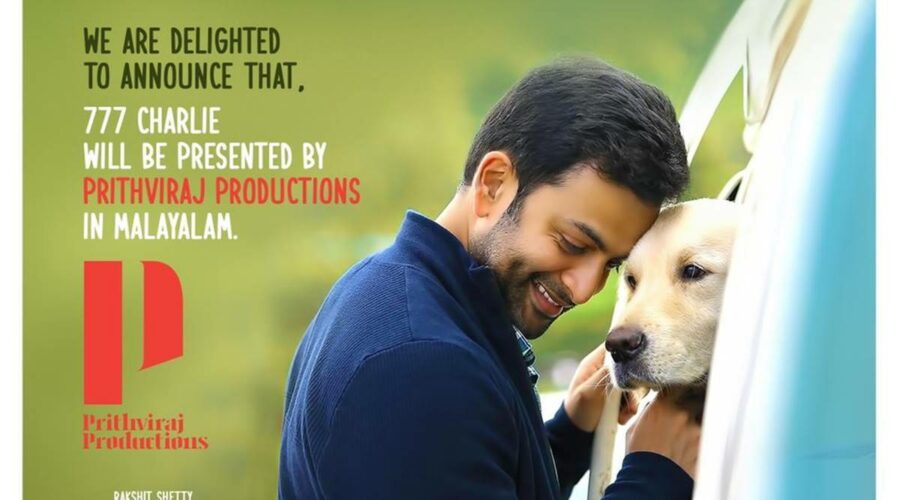 777 Charlie seems to revolve around an intelligent Labrador and its owner, played by Rakshit Shetty. The film also stars Sangeetha Sringeri, Raj B Shetty, Danish Sait, Bobby Simha in the supporting cast. Malayalam actor-filmmaker Prithviraj Sukumaran on Thursday said that he was blown away after watching a few scenes from the upcoming film, 777 Charlie. So much so that his home production banner will be presenting the Malayalam version of the film.

“I’ve had the privilege of seeing a lot of footage from #777Charlie. I cannot tell you how happy we at @PrithvirajProd are to be associating with something so heartwarming in content & truly mind blowing in its execution! (sic),” tweeted Prithviraj.

It is noteworthy that multifaceted actor Vineeth Sreenivasan has also sung a song for the film’s Malayalam version.

The filmmakers want to give a huge nationwide launch to 777 Charlie, similar to that of KGF: Chapter 1. The film will be dubbed in Telugu, Tamil and Hindi as well. The filmmakers also plan to give it a wide theatrical release across the country once the situation improves. The production of the film was completed well before the second wave brought the country to a standstill again. However, there are a few days of patchwork left, which will be taken care of when the entertainment industry is allowed to resume work.

However, producers at Paramvah Studios are seemingly busy finalising distribution deals. If everything goes according to plan, we can expect to see this film in cinemas in December.

777 Charlie is helmed by Kiranraj K. He has been part of Rishab Shetty’s team of writers for a few years now. Before this film, he directed a segment called Sagara Sangama in the 2017 Kannada anthology film Katha Sangama.

777 Charlie seems to revolve around an intelligent Labrador and its owner, played by Rakshit Shetty. The film also stars Sangeetha Sringeri, Raj B Shetty, Danish Sait, Bobby Simha in the supporting cast.