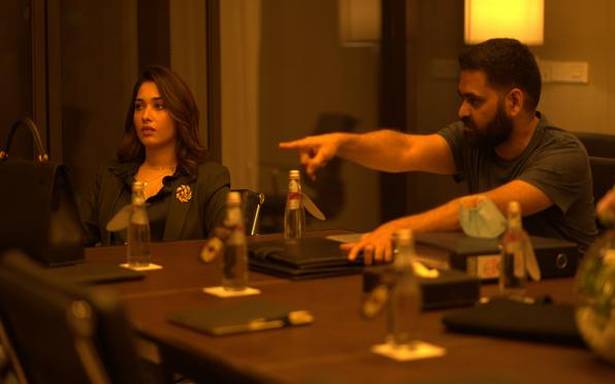 Director Praveen Sattaru’s last feature film was the 2017 Telugu thriller PSV Garuda Vega 126.18M. He is now filming an action drama starring Nagarjuna Akkineni and Kajal Aggarwal. In between these feature films, he has helmed an eight-episode Telugu web series titled 11th Hour, which he describes as a “slow burn, intense and mature corporate drama”. The series headlined by Tamannaah Bhatia will stream on Aha on April 9.

The series is inspired by Upendra Namburi’s 2017 book 8 Hours (Westland publication), in which the protagonist Aratrika Reddy (Tamannaah) faces a multi-layered high stakes boardroom challenge that unfolds over one night.

Producer Pradeep Uppalapati wrote the initial script for 11th Hour, after which Aha greenlit the series and Tamannaah was roped in. Praveen says about the adaptation, “I loved how Pradeep scripted the series, with the right hooks [for each episode]. A lot of things have been changed from the book, barring the protagonist’s name and some of her character traits. Pradeep had written the script in English and when I began translating it to Telugu, more changes came in. Certain expressions that can be conveyed in a word or two in English require a different approach in Telugu. Sometimes, this necessitated the reconstruction of a scene.”

Praveen reiterates that 11th Hour is a mature series that attempts to give a realistic look into the power politics of a corporate company, something we don’t see in mainstream cinema: “It comes from an intellectual and educated space but it will appeal to everyone. The fear of loss is an emotion that anyone can relate to,” he says.

While a film can get away with exaggerated or dramatic takes on reality owing to the collective movie-watching experience, Praveen avers that a series has to unfold in an atmosphere that looks authentic to its genre and story, to keep the viewers invested.

The woman protagonist navigates challenges posed by patriarchy, as the opposing forces try to put her down and indulge in dirty politics: “The world around her is collapsing and she has to find ways to survive,” says Praveen.

The director lauds Tamannaah’s performance and terms it her best to date; he’s confident that viewers will agree when the series begins streaming. The web series space, he explains, is more of an actor’s medium than a feature film: “The length and pacing of a feature film decide if we can linger on the actor’s expressions for a few more seconds after they deliver the desired emotion. In a series, there’s more scope for performance nuances.”

With Tamannaah on board, Praveen wanted a supporting cast that can equally hold attention. Jayaprakash, Madhusudhan, Arun Adith, Vamsi Krishna and Srikanth Iyengar are part of the cast.

The series was filmed in 33 days with a crew of 30 to 40 members who were tested for COVID-19 six times. “The testing was more painful than waiting for the results,” laughs Praveen. The boardroom portions were filmed at a hotel when the occupancy rate was low, owing to the pandemic. “The story also has a few prologues from the past, which were filmed elsewhere,” he adds.

Soon, Praveen will begin working on the next schedule of his untitled film with Nagarjuna and Kajal Aggarwal. Post PSV Garuda Vega and before 11th Hour, for more than a year, he was part of the direction team for the web series Baahubali: Before the Beginning, along with Deva Katta. However, Netflix reportedly decided to scrap the portions filmed thus far. “A lot of effort went into it, but ultimately a series is the digital platform’s call. For a film, a director needs to convince the producer and actors and get going. In a series, a director is like any other technician. Once the first cut is delivered, the director has no say. We filmed in tough conditions for over 100 days, with large crews of 300 or more. But we have all moved on to other projects.”