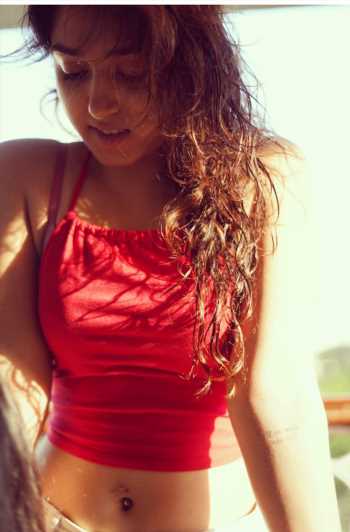 In India, celebrity kids are also famous just like their parents and the media never fails to capture their outings and parties. For instance, Taimur Ali Khan, Ziva Dhoni, Suhana Khan and Khushi Kapoor have a huge fan base already and many celebrities’ teenage kids are also constantly scrutinized.

Even without a debut, they have followers on social media, either for their looks or for being ther favourite celebrity kids. One more star’s daughter is currently on top of the race and she is none other than Aamir Khan’s darling daughter Ira Khan. Ira is pretty active on her Instagram and her pictures prove to be modern and stylish, uniting herself aptly for today’s generation trends. Her recent picture shows her flaunting arm tattoo and belly piercing.  She wore a red crop top and looking beautiful, all ready for her debut.

Her body piercing steals the spotlight as she sports a silver stud on her belly. Also, another picture shows her arm tattoo that reads, ‘If we won’t, who will?’. This tattoo has been done six days ago and Ira showed it off to her followers, saying it is her first tattoo. For her picture, Dangal actress Fatima Sana Sheikh commented ‘Hottie’ and netizens too praised her for stunning looks.