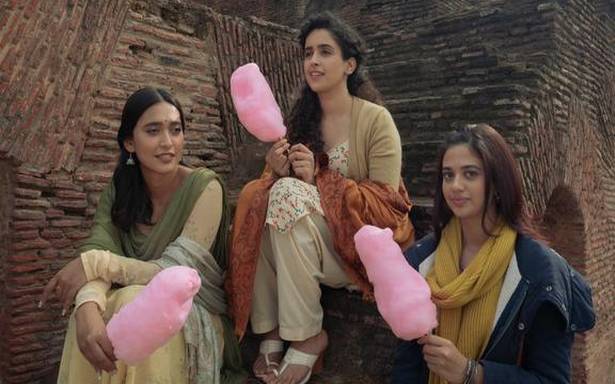 At the heart of it all, lies the power-packed yet unostentatious performance by Sanya Malhotra, who brings the lead character to life with much aplomb

Netflix’s focus on chronicling stories set in India’s small towns breaks new ground with Umesh Bisht’s film Pagglait. Aided by a skillful cast of actors and sharp writing, the movie rebels against the conventional social order that leads to the germination of an atypical Indian joint family. It does so by serving as a reflection of the insular societies within the larger Indian polity, setting the stage for a dark drama bordering on ludicrously funny.

Its plot essentially revolves around the recently widowed Sandhya Giri (Sanya Malhotra), who grapples with the inability to mourn her husband’s death, even when people around her are bawling, following weird superstitions and engaging in outright farcical behaviour to express grief.

The dynamics of arranged matrimony undergoes thorough cinematic scrutiny, invoking the viewers to find answers to some of its unnerving enquiries, while laying bare the inherent hierarchical structure of an extended family unit, and its treatment of widows with exquisite simplicity and detail.

Pagglait also displays the outlandish credulity of some of its characters without a pedantic view of the same, portraying effortlessly the powerful role that blind faith plays in Indian families when dealing with tragedy.

However, the main conflict in the tale emerges when family members are informed that Astik (the late husband) has left behind ₹50 lakh worth of insurance money for Sandhya alone and nothing for his parents who are in crippling debt.

Thus, begin the conniving endeavours of the family’s patriarchal figureheads, hell-bent on keeping the money within the family. That and Sandhya finding out Astik might not have been entirely faithful to her during their brief marriage leads to some stark revelations, steering the narrative forward at a brisk pace.

At the heart of it all, lies the power-packed yet unostentatious performance by Sanya Malhotra, who brings the lead character to life with much aplomb, adding a layer of nuance to Sandhya’s predicament and the way she chooses to deal with it.

Meet the team behind ‘Pagglait’

The supporting actors are equally adept. Raghubir Yadav’s delicious portrayal of his character, a treacherous bigot who tries to control his family with an iron grip, is a treat to watch. The simplicity with which Yadav goes about his job is commendable, expressing on screen a persona that is as relatable as it is repulsive.

The likes of Ashutosh Rana and Sayani Gupta seem earnest on-screen too, and through their acting displays, mete out justice to their well-etched supporting characters. This creates the perfect storm of realistic storytelling with a generous dose of moral messaging.

The script marvelously touches on the devastation that follows the untimely death of a young family member, without even fraying into a detailed backstory of how he met with his end. And yet, instead of hampering the steady development of characters and story, it establishes a unique cinematic style that is engaging to say the least.

The screenwriting and dialogue formulation in the movie is excellent, providing a ‘slice of life’ quality to the entire production. The cinematography and art-direction is also spot on, helping some of us experience the Indian small-town experience with a degree of authenticity which is laudable.

The dialogue: “Jab ladki log ko akal aati hai na, toh sab unhe pagglait hi kehte hain!” (When a woman gets wise enough, she is labelled as ‘crazy’ by everyone) not only sums up the emotionally riddled state of mind which Sandhya finds herself in, but also makes a scathing comment on the plight of young women in the not-so-progressive bastions of the country.

That being said, the film has its share of flaws. Its attempts at focusing on issues of women’s emancipation, though executed with the right intention, lacks a decisive voice which is often lost in silly frivolities that the production could have done without.

The score by Arijit Singh is quite melodious with introspective lyrics, but when juxtaposed with the events in the movie, comes across as too melodramatic, suitable for an over-the-top Bollywood drama, but not for a mature tale of repression and grief.

All in all, Pagglait has a unique way of tackling social issues that have always been a matter of concern in a social setting increasingly plagued by crippling orthodoxy. Only now, its depiction has become more genuine, and make its viewers contemplate the hard realities of the Indian experience.

Pagglait is currently streaming on Netflix

03/27/2021 TV & Movies Comments Off on ‘Pagglait’ movie review: An insightful tale of repression and tragedy, taking pride in its simplicity
TV & Movies