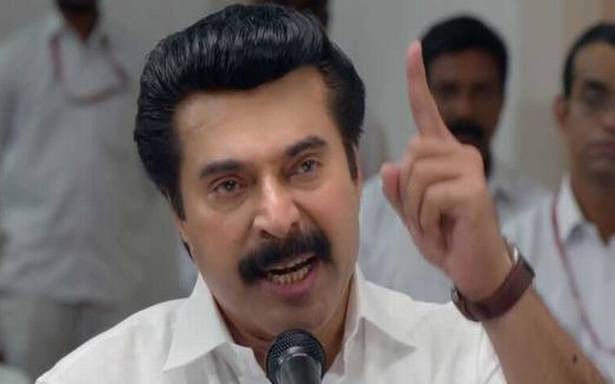 The actor’s towering screen presence holds the film together, even when the script falters

Films with political themes evoke much curiosity in Kerala even under normal circumstances. Now, at the doorstep of an all-important election, the interest is bound to be even more, especially to spot similarities with the happenings in the real world. Though there were such speculations, Santosh Viswanath’s ‘One’ stays clear of these so much so that it would be hard to draw parallels to real-life figures, except for a couple of recent developments being included in the script.

In fact, Bobby-Sanjay’s script is so much a sanitised version of a political film that there is no mention of any party name or ideology or even a visual with political flags. Due to this, it is at times hard to distinguish between the ruling and opposition MLAs, which also happens to be the message that the film seeks to convey: of one honest, righteous, do-gooder amidst a cesspool of corrupt, self-serving politicians.

Even though it is a star vehicle, the protagonist takes quite some time to make his entry, with the initial half hour used to build up the anticipation. A college student (Mathew Thomas) writes a Facebook post against Chief Minister Kadakkal Chandran (Mammootty), after his security staff blocks and assaults the youth when entering a hospital where his father is admitted, while the CM is visiting. The post kicks up a political storm with the opposition led by Jayanandan (Murali Gopy) targetting the CM. However, this is just a starting point, with the script skirting aimlessly from one issue to the next, to rest on the core theme of Chandran’s quest to cleanse politics by championing a ‘right to recall’ bill.

Santosh Viswanath, who debuted with the spoof film ‘Chirakodinja Kinavukal’, attempts to create a contemporary political film, but the outcome is something which is far away from reality. In fact, some of the scenes betray a peripheral understanding of politics in the state. As for the politics that it stands for, it presents the kind of ideas glorified by the ‘India Against Corruption’ movement, which in hindsight had many pitfalls. It invests its trust in an all-perfect individual without any failings, with the rest seen as bad apples. We all know where that leads to.

The script, which manages to build the anticipation, never quite hits the highs that one would expect from such a high-voltage mainstream film. It also fails to build on some interesting plot points, like Chandran’s periodic memory lapses. The plot often returns to the college student, and to how the CM comes to his rescue time and again. It not only limits the scope of the CM, but of the film too. While the plot gave a nice touch to the relationship between Chandran and the party chief (Joju George), the same cannot be said of the obligatory family relationship scenes involving the CM.

In the end, it is Mammootty’s towering screen presence which holds the film together, even when the script falters. ‘One’ is yet another political film in Malayalam with a somewhat apolitical message.

One is currently running in theatres