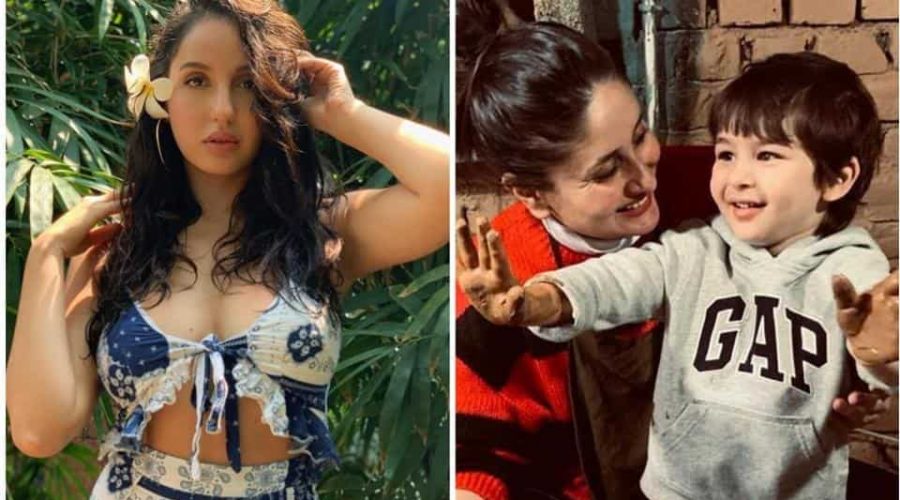 Nora Fatehi expressed her desire to marry the nation’s sweetheart, Taimur Ali Khan. She told Kareena Kapoor Khan on her chat show, What Women Want, that she would like to marry him when he is older.

Kareena told Nora that she and her husband Saif Ali Khan are in awe of her stunning dance moves. Nora thanked her and said, “I am hoping that soon, when Taimur gets older, we can think about an engagement or marriage between me and him.”

The statement stumped Kareena for a few seconds but then she laughed and told Nora, “Well, he is four. I think there is a long way to go.” Nora laughed and replied, “It’s okay, I will wait.”

Saif and Kareena’s son Taimur has been a favourite of the paparazzi since he was born. He is quite used to photographers following him around now and sometimes even tells them ‘no photos’ when he is not in the mood to be clicked. However, at other times, he takes off his mask and happily poses for pictures.

Kareena is expecting her second child with Saif in February. She has been working throughout her pregnancy, whether it is shooting for advertisements or recording her radio show.

Nora was last seen on the big screen in Remo D’Souza’s Street Dancer 3D, which released last January. She recently featured in the music video of Guru Randhawa’s single, Naach Meri Rani, which is nearing the 300-million views mark on YouTube.

Currently, Nora is gearing up for the release of Abhishek Dudhaiya’s Bhuj: The Pride of India, which is set in the backdrop of the 1971 Indo-Pakistan War. The film also stars Ajay Devgn, Sanjay Dutt, Sonakshi Sinha, Sharad Kelkar and Ammy Virk. It is scheduled for a direct online release on Disney+ Hotstar.

01/07/2021 TV & Movies Comments Off on Nora Fatehi says she wants to marry Taimur Ali Khan. This is how Kareena Kapoor reacted
TV & Movies