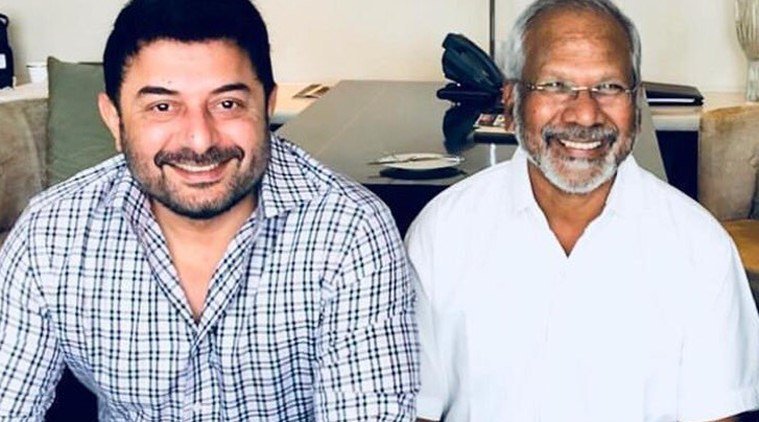 Actor Arvind Swami, who will next be seen in Karthick Naren's Naragasooran, opened up about the director, mentor Mani Ratnam and his comeback. Actor Arvind Swami disappeared from the film industry for 10-12 years before he made a comeback with Mani Ratnam’s 2013 film Kadal. The actor in a chat show opened up about his comeback, his future plans and much more.

How has the second innings been so far?

It’s good. I did not think of making a comeback. Actually, Mani Ratnam brought me back with the film Kadal. After that, I did films like Thani Oruvan and Bogan, which were well-appreciated. It is very heart-warming (to see that.) So, I thank them.

You played an antagonist in Bogan and Thani Oruvan. Was it always the plan?

I always wished to do a negative role; so when Mohan Raja narrated me the script, I found potential in that. He gave me the opportunity to develop the character. He said, ‘You should play the character without any justification.’ The project is always important. I always think about my contribution and about how I can take my character forward. I don’t mind playing a negative or a positive character. I don’t even mind short screen time.

How was it working with a young director like Karthick Naren for Naragasooran?

Very interesting. New generation filmmakers have a new outlook and execution skills. I find their thought process and the choices they make very interesting. Karthick is a great director with a brilliant mind. His screenplay sense is amazing and in my point of view, he has got a Manoj Night Shyamalan-like thinking. I think he has got great potential.

What do you have to say about Mani Ratnam?

He is the reason I am in the profession. He was the one who brought me here. He taught me everything. And he inspired me to make a comeback.

He brought you in the industry twice. For Roja, he had to convince your parents as well. Is that true?

(The first time) I gave the audition and it was okay. He said, ‘We will start in two-three days.’ So, I told him, ‘I don’t know if my dad would allow me to come. You will have to talk to him.’ So, he came and convinced my father because my father wanted me to complete my higher studies first. He didn’t want me to establish a career in the film industry. He was very clear about it. I promised to go for higher studies after two years and that actually happened. I did my masters after Roja. I was not present here when Roja released. I had told my parents that I will not make acting my profession and will go for higher studies. But after a year, I had to come back. After that, I continued (as an actor.)

What is next for you?

I am going to direct a film this year.

I want to be closer to nature, in a remote place, with my wife.

Arvind Swami appeared on Famously Filmfare Tamil, which is currently streaming on MXPlayer.