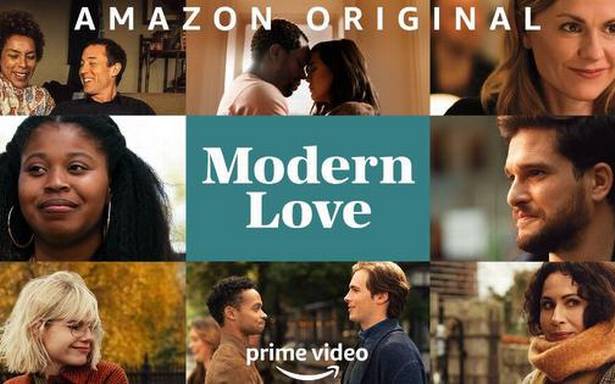 The beauty of Modern Love, based on the long-running weekly column in The New York Times, as creator John Carney said in an interview with this writer, is you could dip into it at any time, in any order. Also, there is no rule saying you have to like all the episodes. At just over half an hour it does not call for a great investment of time and for that small parcel of your day, delivers rather sweet love stories.

There is a doctor (Minnie Driver) holding on to problematic sports car as the last memory of her husband (Tom Burke) who she loses to cancer (‘On a Serpentine Road, With the Top Down’). ‘The Night Girl Finds a Day Boy’ is just that — a girl with delayed sleep phase syndrome (Zoë Chao) meets a teacher (Gbenga Akinnagbe) but their dating is fraught with circadian rhythm difficulties.

‘Strangers on a (Dublin) Train’, Lucy Boynton and Kit Harington, decide to go old school and not exchange numbers. They plan to meet at the station in two weeks, but the lockdown comes in the way. A stand-up comic (Dominique Fishback) remembers her schoolgirl crush (Isaac Powell), which stubbornly stayed in best-friends zone in ‘A Life Plan for Two, Followed by One’.

A young girl (Pearl Zeldin) tries to figure out her sexuality through social media quizzes in ‘Am I…? Maybe This Quiz Will Tell Me’ while ‘In the Waiting Room of Estranged Spouses’ sees two betrayed people (Anna Paquin and Garrett Hedlund) form a connection at their therapist’s office.

‘How Do You Remember Me?’ looks at memory as two young men (Marquis Rodriguez and Zane Pais) meet each other on the street and remember their date very differently. A long-divorced couple (Sophie Okonedo and Tobias Menzies) get back together just in time for a dreadful diagnosis in ‘Second Embrace, With Hearts and Eyes Open.’

‘On a Serpentine…’ was interesting for the importance we give to objects and also the echoes of that heart-breaking O. Henry short story, ‘The Gift of the Magi’. ‘Strangers on a (Dublin) Train’ was likeable for its timeliness and timelessness. Also, who knew Harington was a Bonafide rom-com star hiding as he had been under all those chips Jon Snow carries on his shoulder? There is a nudge, nudge wink, wink reference to Game of Thrones as well. Miranda Richardson has fun as the pothead mum.

Though ‘Second Embrace…’ has all the clichés, it is still moving and lot of the credit goes to Menzies who we know from The Crown is a great husband and father and Okonedo’s character is called Elizabeth for goodness sake!

While the other stories did not work for me — being too busy (‘Am I…) gimmicky (‘How Do You Remember Me?’), laboured (‘In the Waiting Room…), twee (‘The Night Girl…) or inaccessible (‘A Life Plan…’), it does not mean they will not work for anyone. And that is the appeal of Modern Love —there is something for everyone.