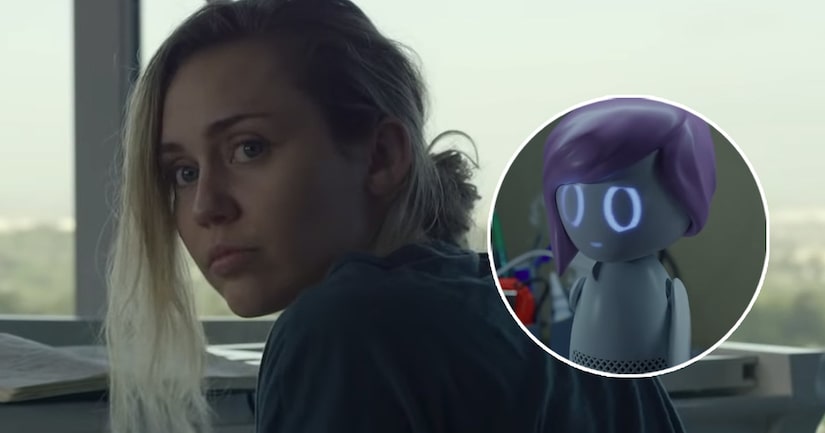 Hannah Montana just got the darkest of reboots.

The new trailers for season 5 of "Black Mirror" dropped on Tuesday, showing Miley Cyrus living a double life as a popstar, much like the Disney role that made her famous.

In "Rachel, Jack and Ashley Too", one of the three episodes from the upcoming season, Miley plays a popular purple-haired singer named Ashley, who introduces an Alexa-esque robot companion version of herself for fans to own, called Ashley Too (voiced by Cyrus).

But the tiny virtual assistant appears to have more of a life of its own than mere programming — if her agonized reaction to being plugged into a computer is anything to go by.

"AAAAGHHHH GET THIS CABLE OUT OF MY A–!! HOLY S–T!! PULL IT OUT!"" she screams at owner Rachel, before exhaling "God! That’s a relief!"

Meanwhile the real Ashley is clearly putting on a happy front for fans, as behind the scenes she struggles with the pressures of fame and her mental health begins to deteriorate.

"A lonely teenager yearns to connect with her favorite pop star – whose charmed existence isn’t quite as rosy it appears," the synopsis reads.

In "Smithereens", which also stars Topher Grace, "A cab driver with an agenda becomes the centre of attention on a day that rapidly spirals out of control."

The episode sees Irish actor Andrew Scott ("Sherlock’s" Jim Moriarty) play a ride-share driver who appears to flip out at the fact everyone is hooked on their phones, and holds a passenger ("Snowfall’s" Damson Idris) hostage.

"Two estranged college friends reunite in later life, triggering a series of events that could alter their lives forever," the synopsis reads.

The last episode, "Striking Vipers", is a comic-book lover’s delight in terms of cast, with Avenger Anthony Mackie, "Aquaman" actor Abdul-Mateen II and "Guardians Of The Galaxy" actress Pom Klementieff all starring.

The trailer shows a distracted and disillusioned Mackie as his partner pushes to get pregnant, while she becomes increasingly suspicious.