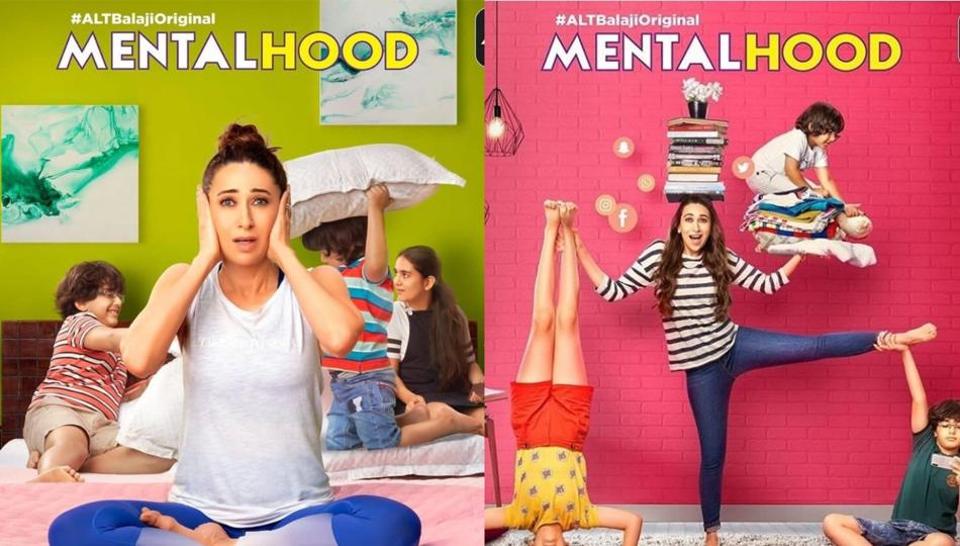 Actor Karisma Kapoor is all set to make a comeback to acting with web series, Mentalhood. The actor was last seen in 2012 film Dangerous Ishhq. While she is a mother of two kids – daughter Samaiera and son Kiaan Raj Kapoor in real life — the actor will be seen as a mother of three kids living in Mumbai.

The actor can be seen shutting her ears on the poster as three kids engage in pillow fight in the background. Producer Ekta Kapoor welcomed Karisma on board and tweeted, “@altbalaji n I welcome Karishma Kapoor on board to frontline this amazing ensemble of mommies! She was d first n only choice n it took many mtngs ( n ten fully bound scripts ) to get this perfectionist on board !!!p.s Thanku Reshma #Mentalhood.”

She wrote in another tweet, “Meet meira sharma (she was meera but the momzillas call her ‘ meiraaa’ mairaaa’ to make her sound more fashionable)she is d inner voice of all moms ! She navigates her way thru gluten free chips n gajar ka halwa..bullies n control freaks …n then blogs all of it!!! #Mentalhood.”

The web series will showcase the topsy-turvy ride of the various kinds of mothers that exist and how they manoeuvre their way through unreasonable expectations and eccentricities to raise their children. How multi-tasking becomes a habit and constant worrying and guilt becomes their nature forms the crux of the show.

Talking about why she gave her nod to the show, Karisma said, “Out of choice I wanted to be with my family and children. After a while when I heard this script it was so interesting, the script was about today’s mother and it was so strong. Women of all ages and all those who are mothers will identify with my characters. It is also something which I am going through right now. Young parents and older parents will identify with Mentalhood. My character is today’s mom and as a human, she will do the right thing and is real. I am thoroughly enjoying shooting with all my lovely co-actors.” The show will release later this year.

Revealing that her children are also excited about her getting back to work, Karisma told IANS in an interview, “They are excited that I am working again. I started working at a very young age. Everyone in my family has been an actor and contributed to this industry. I have grown up with a really strong work ethic, and I think that’s hopefully gone down to my children as well.”

Karisma credits mother Babita for her success so far and added, “She has given me and sister (Kareena) the strength and the grounding. We have learnt a lot from her. She gave us really good values like to respect our family, to value money, to work hard and be sincere and be good human beings. These things go in a long way. These mould you as a person.”.

05/22/2019 TV & Movies Comments Off on Mentalhood poster: Karisma Kapoor returns to acting as a multi-tasking mother of three
India