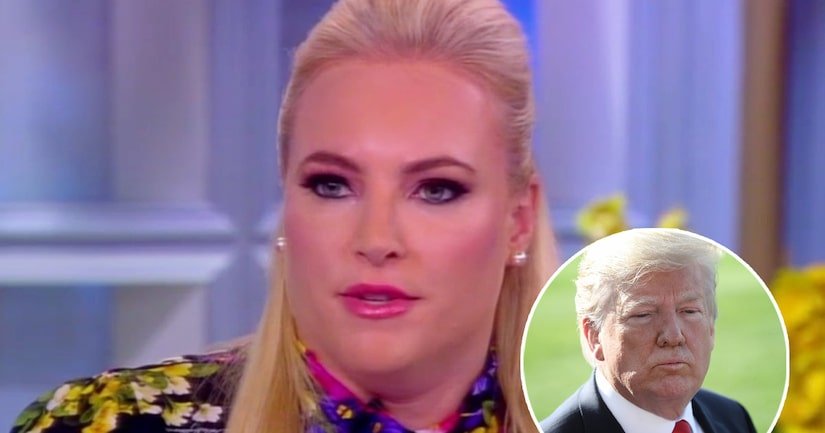 She also took aim at critics calling her out for “how often I speak of my father” on the show.

Meghan McCain came in hot at the top of "The View" on Thursday, as the show devoted its first segment of the show to her responding to the latest White House controversy involving her father, John McCain, and President Donald Trump.

On Wednesday, the Wall Street Journal reported that the White House ordered the Navy to make the USS John S. McCain "out of sight" during Trump’s visit to Japan. This morning, Trump said he "would never do a thing like that," but said whoever made the request was "well-meaning" because "they know I am not a fan" of the late Arizona politician.

The report was the first topic of the day on the ABC talk show.

"I will say, the President’s actions have consequences and when you are repeatedly attacking my father and war heroes, it creates a culture in the military where people are clearly fearful to show my father’s name in one way or another and that, I think, is what has started this chain of events and actions," said Meghan.

"You’re putting people in the military in horrific situations. They’re fearful for their jobs. If, god forbid, you’re a sailor on this ship, you think there’s going to be some kind of retribution and I think it’s horrible, I think it’s bad for Americans and I think we have to look at the culture that’s being put in place," she continued.

McCain added she doesn’t put blame on those in the military — saying she has "nothing but respect for people who serve" — before then calling out those who criticize her for how much she speaks about her father on the show.

"There’s a lot of criticism toward me in the media across the board of how often I speak of my father, how I grieve, how I do it publicly, but it’s impossible to go through the grief process when my father who’s been dead 10 months is constantly in the news cycle because the president is so obsessed with the fact he’ll never be a great man like he was," she said to her critics.

"It’s a bizarre way to grieve, it’s a bizarre way to say goodbye to my dad, because it’s so omnipresent in politics and not in a way that we’re honoring him," McCain went on. "You’re weaponizing his legacy in the way that you want. please have a little more compassion, this is hard, I try to put on a game face every day and be as stoic as possible, but grief is tricky and I’m still sad."

On Twitter last night, she also added, "Trump is a child who will always be deeply threatened by the greatness of my dads incredible life. There is a lot of criticism of how much I speak about my dad, but nine months since he passed, Trump won’t let him RIP. So I have to stand up for him. It makes my grief unbearable."

The US Navy’s Chief of Information Twitter account was also reactivated on Wednesday to respond to the report, saying, "The name of USS John S. McCain was not obscured during the POTUS visit to Yokosuka on Memorial Day. The Navy is proud of that ship, its crew, its namesake and its heritage."

On "The View," McCain added that the ship was also named in honor of her grandfather and great-grandfather, who were also admirals in the Navy.