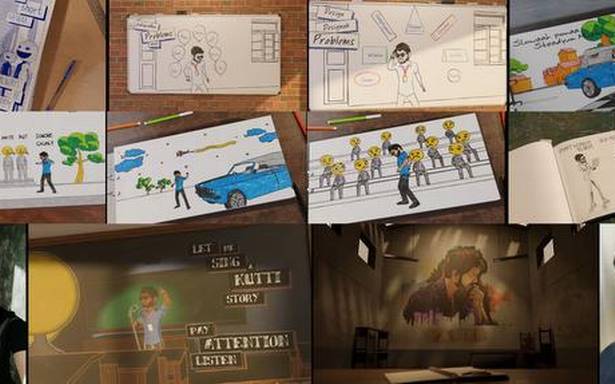 The people responsible for the song’s lyric video — Coimbatore based 3D visualisation and animation company Realworks Studios, and Lokesh Kangaraj’s associate director, Logi — tell us the larger story behind their ideas.

Actor Vijay’s newest single ‘Kutti Story’ composed by Anirudh Ravichander, from his upcoming film Master directed by Lokesh Kanagaraj, is all the rage on YouTube.

In under 24 hours since being uploaded to the video sharing platform (at the time of writing), Kutti Story’s lyric video has notched upwards of 6.5 million views, and is still going strong.

Kutti Story stands out courtesy its impressive visualisation that has a 3D-modelled Vijay moving his body to the tune alongside his students — stick figures with emoji for heads; the verses appear as text written on a blackboard using a piece of chalk, as photocopied documents, on a college letter head, and as announcements stuck on a notice board among other novel ideas.

The creative concept for the Kutti Story video comes from 25-year-old mechanical engineer-turned-filmmaker, ML Vignesh aka Logi (his screen credit). An associate director to Lokesh Kanagaraj in Kaithi and now Master, Vignesh says that the lyric video was completed in 10 days.

"In fact, we were working on it till 4.30pm," he tells us over phone from Coimbatore. The video was uploaded to YouTube at 5 p.m. on February 14.

Vignesh is cautious enough to not give away spoilers of a film that is still under production in Chennai. "You will understand the aesthetics of the lyric video while watching the film. But I can tell you that the root inspiration was Vijay sir’s performance and the way we have visualised the song in the film. Using emojis… well, they have become a constant in our lives. Emojis are something all of us relate to," he says, adding that combining these ideas, he imagined the lyric video as a "college project that a group of students were putting together."

The concept of using VFX or 3D animation for songs is a relatively new concept. In 2015, Mani Ratnam tested the idea in his film O Kadhal Kanmani for the Kaara Aattakkaara song. Coincidentally, another upcoming Tamil film, Teddy starring Arya and directed by Shakti Soundar Rajan, also released an animated lyric video a couple of hours priors to Master, for the single ‘En Iniya Thanimayae’ in the film.

Vignesh adds that the team will be happy if more producers embrace this concept. "He (Lokesh) was looking for something different than follow the regular template of a lyric video. This way, the song’s reach is more. It was something Anirudh kept saying… that he wants people to come back and watch the lyric video. People these days use music streaming apps, and they wouldn’t come back to watch the video had we stuck to the template," he says.

When Vignesh’s pitch was okayed by Master’s production team, the crew reached out to Coimbatore-based Realworks Studios for its execution. Realworks have a prior in the film industry. This 3D visualisation firm, with its office in Vadavalli, had come up with Ranadheeran in 2014, as a tribute to actor Rajinikanth. Based on the actor’s animated feature, Kochadaiiyaan, Realworks recreated Rajini and Deepika Padukone’s likeness, and put out a five minute clip — achieving all this using open source software like Blender.

It was the same tactic adopted for Kutti Story as well, says Sivaprasad Velayudhan, proprietor, Realworks Studios. This way, he managed to keep the costs down to a relatively cheap ₹4 lakh, which is highly impressive taking into account the cost to quality ratio. "It is also the lowest price in the industry. Being based in Coimbatore helps (in terms of resources cost). Also, our platform is Linux based and we don’t use software like Maya, Autodesk 3ds Max or Photoshop," he adds.

Kutti Story came to him only this month. "We were working backwards. They (film crew) were asking for a 2D concept but we are a 3D team. We can’t produce a five minute clip in 2D in 10 days, and they too couldn’t take it elsewhere. That was the situation. So, we started exploring the idea of 3D rendering in a way that would make it appear as if it was stop motion animation. The film team was okay with this idea," says Sivaprasad.

If, after watching the video, you thought that there were pencil sketches involved, then watch again. "The snappy nature of the animation was intentional because hand animated stuff is not fluid. For instance, the animated sequence of Vijay sir in the car, it would look like it was drawn using a sketch pen," he adds.

With an 18 member team, Sivaprasad worked with an all hands on deck approach over the last four days to deliver the content on time. "All our members are generalists in that we do cross work like rendering, lighting, shading, modelling etc. All of us were involved in building the assets, character building, colouring and styling process," he says. While Vignesh suggested all the shots, Sivaprasad’s team contributed with the value additions like the background, use of notebooks, blackboard, broken college benches and other computer-generated paraphernalia.

The 10-year-old animation company is hoping that Kutti Story’s success will attract more interest from Tamil film producers and directors in the future. "It is no more a lyric video. Kutti Story is a music video," Sivaprasad concludes.