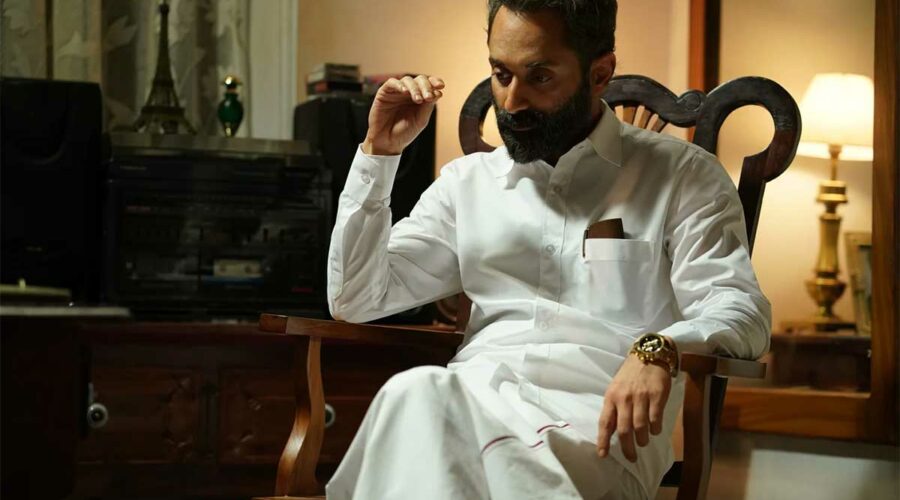 ‘We feel thrust into a motion picture that has all the makings of a carnival but no real fireworks,’ Sreehari Nair notes after watching Malik.

Give Mahesh Narayanan’s Malik your absolute attention and you can discern the difference between elegant, careful film-making and overly controlled film-making.

The fictitious locality of Ramadapally that provides the setting for Narayanan’s third film has been elaborately crafted. You can, for example, sense the many drafts that must have gone into designing just the playground, cleared out of a junkyard, where the once-irreligious-but-soon-to-be-messiah Ahamaddali Sulaiman (Fahadh Faasil) is shown playing volleyball, surrounded by garbage covers and discarded gunny bags, and stopping between passes to wave at his future wife, Roseline (Nimisha Sajayan).

When the fishermen community of Ramadapally is hit by a tsunami, Narayanan stages and photographs the rescue operations as if to put us at the centre of the action. Quick shots from helicopters give way to a shot of the beach where we see people scampering to the nearest relief camp and stepping on the heads of dead oxen now submerged in the sand.

Outside a relief camp, the tsunami winds blow, never hysterically (there’s none of that excessive howling you are used to hearing at the movies) but at just the right pitch.

Taking after a standout imagery of the Beemapally firing of 2009 — in which six Muslims had lost their lives — we see a child’s body being dragged across the beach by the police.

It’s characteristic of Narayanan, however, that most of his energy has been spent on drawing up the effects and mounting the sets, that he hasn’t bothered to develop his characters — to him, they are mythic on conception. And you get the entire gamut: the kindhearted and socially-conscious don, the helpless wife, the stool pigeon, the two-timing politician, the honest bureaucrat who does more damage than good, and other invisible string-pullers. 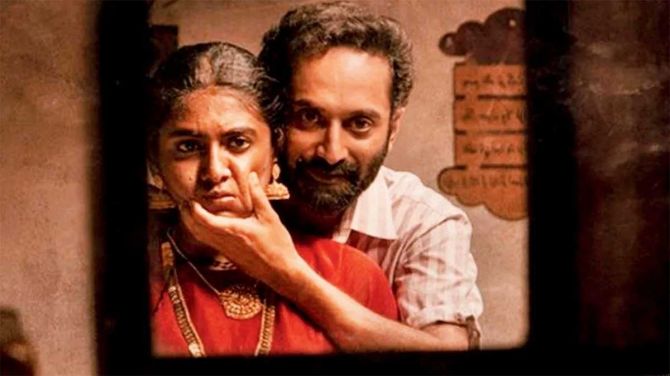 As with his first film, Take Off, here too, Narayanan puts on a show but, beyond that, what we get to experience are pre-digested frames in which the actors have been offered no breathing space or opportunities to contribute. Consequently, they bring nothing to their roles and this martinet control, coupled with Sanu John Varughese‘s over-precise camera movements, make the film’s style seem portentous and leering.

The scenes have no sense of discovery, especially the ones involving back and forth, where you ideally want to see the actors responding to each other, you want to watch incongruous energies co-existing without moderation and Narayanan rigidly cuts from one subject to another.

This makes the 12-minute-long uncut short at the beginning seem like sheer gimmickry. In those 12 minutes, the camera hardly rests for a second, but the nervousness serves no purpose because the performers are all moving and speaking for the recording instrument: there’s no behaviour on display; it’s as if everybody is simply turning up to justify his or her stiff countenance.

From this point on, we get some illustrations of tensely staged moments — Ahamaddali Sulaiman’s arrest before his flight to Haj; Ramadapally in a state of boil; a state-sponsored plan to execute the diabetic messiah while he’s still in police custody. We wait for the back story and Sulaiman’s mother (Jalaja, whose sad, sad face becomes the spirit of this turgid tale) is wheeled in to narrate the first part of this story, to her son’s potential assassin no less.

Mom narrates the deprived childhood and the steady climb and does not leave out even the sordid details of Sulaiman’s sex life (“How can she know so much?” you wonder. Presumably, since “mother knows everything”). It doesn’t matter that momma oversteps the bounds of privacy because, by then, you understand the game that Mahesh Narayanan is intent on playing: he has found a neat way to fasten the Beemapally incident to the rise-and-fall arc of every conventional gangster picture ever made. 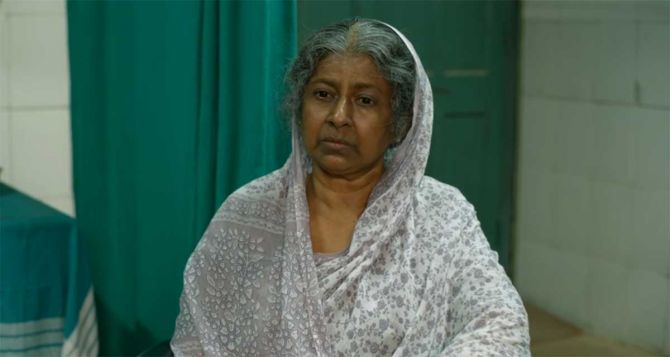 The musical choices are dished out with strict labels (‘rousing music’, ‘techno music’, ‘groovy music’, ‘gloomy music’). There are sudden transitions to foreshadow jealousy and betrayal. All this and yet you feel nothing.

Incidental pleasures, such as that imagery of little Sulaiman puking after his first independent sea-trip even as his mother runs after him to smack him, dwindle with every passing frame.

I had heard actor Vinay Forrt proudly say in a publicity interview that the film has no *humour* — as if cracking punchlines and engaging in slapstick comedy are all there is to the term.

The truth of the matter is that when you give the elements in a body-focused art complete free will, when you allow the details to collide organically, you evoke on screen a set of contradictions, brewed beyond the page, drawn from life. This is no metaphysical axiom but basic film-making common sense and Clive James, I suppose, was right when he suggested that ‘humour is essentially common sense, dancing’.

And this is what one misses in Malik — some key steps of film-making itself. We feel thrust into a motion picture that has all the makings of a carnival but no real fireworks. You see wonderful shots of festoons being put up for a festival and you see other preparations occurring inside a mosque, but there’s no joy to be gleaned.

Outwardly, the only section of sustained joy is one where Sulaiman and his gang travel to Dubai, get rich and get drunk on excess, but there again you are left waiting for some minute but striking features, some unexpected little turns and light touches; you are left waiting in frustration for some trifles that would do nothing for the narrative and yet convey the atmosphere of the story and how the times (late 1980s) bear on what happens in the story. 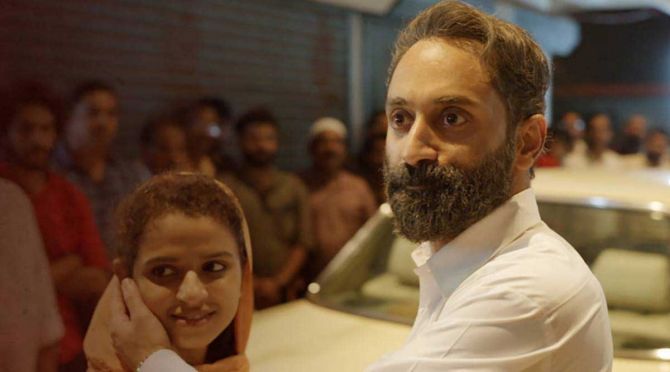 Comparisons to The Godfather are perhaps unavoidable, but Coppola’s film wasn’t just about deceits and double-crossings. It was also about those tarantellas, those football weddings, those little girls dancing on the feet of old men. The terror and sensuality of that film came from the fact that both ‘meatball cooking’ and ‘garroting’ were approached with the same level of intensity (and this is how it acquired dimensions not present in Mario Puzo’s source material).

In this decidedly solemn enterprise, except for Vinay Forrt — whose David starts off as Tom Sawyer to Sulaiman’s Huck Finn, and who later, when his friend starts to give himself Jesus airs, transforms into Judas — Narayanan extracts lifeless performances from almost everybody. 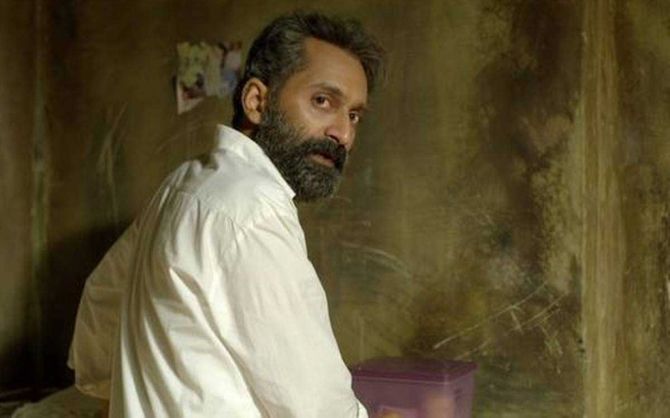 Fahadh Faasil makes a routine out of walking briskly, shooting death rays at the camera and saying something to gladden the hearts of Diaper Marxists and I couldn’t help laughing every time he slipped into this routine.

I guess Mahesh Narayanan was simply doing the fashionable thing when stating in pre-release interviews that the characters in Malik are ‘grey’ because Sulaiman, here, is far and away the whitest that Fahadh has ever been; it’s also his weakest performance to date.

I have always believed that the progression from Mammootty and Mohanlal to Fahadh is comparable to the progression from theological books to the novel. The 2 Ms may have in their careers played leading men with vices but, save a few exceptions, the endings of their films were foretold: You had to come out on the side of the leading man, one way or the other. This is also how St Augustine or Thomas Aquinas conceived their texts, where a reader’s final sympathies were built up for an all-good and all-powerful God.

In Fahadh, you got the feeling that you were moving from the times of Aquinas to the times of Melville, you were moving to the question: ‘What if God wasn’t all-good and all-powerful?’ With regard to his craft, you always felt Fahadh had *more time* than the other actors, but most importantly, he was on course to recast the leading man in a whole new mould.

And if interviews which begin with proclamations of his being a ‘Pan-India Star’ and which then slide toward deducing his ‘Process’ (and thereby eroding his unconscious) weren’t enough, we now have Mahesh Narayanan trying to paint the actor as one of those NGO-grade messiahs who seems always to be in a hurry to ‘do good’. 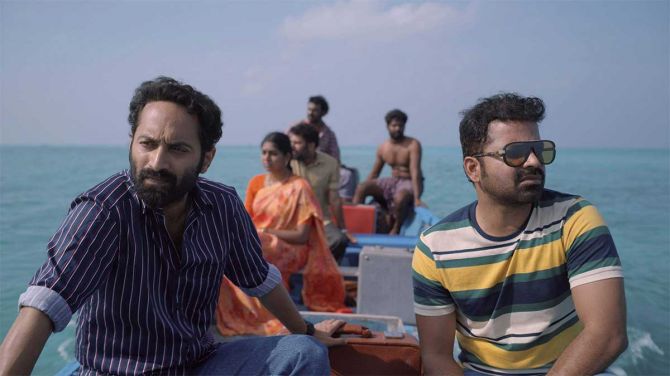 You can argue that Vito Corleone at some level was a prude too but with Vito you also got a fullness of personality: his business intelligence, his shrewdness, his personal yet well-rounded sense of justice, the pressure tactics he was capable of deploying were all revealed to you, though in slices.

In Malik, you don’t even know if the negative impressions that people harbor about Ahamaddali Sulaiman are gospels or gossip; as for the man, he seems more self-styled and delusional than intuitive. And Fahadh plays Sulaiman purely from the neck up; he’s all beard and weight loss and tired eyes, but there’s not a semblance of earth, of blood, of humanity.

Though the plot of his second directorial effort, C U Soon, was practically hogwash, there you were carried along by those compelling evocations of characters behaving in front of their gadgets, their typing and re-typing of messages, and their self-conscious listening before digital screens.

The relationships that Narayanan’s people share with their devices are clearly more intimate than what they share with one another; hence my hunch that a documentary about the making of Malik might possess more vitality and juice than the film itself. They may be sources of interesting shooting experiences but, as a viewer, the impersonality of Mahesh Narayanan’s movies leaves you in a state of dramatic vacuum.

This is why those arguments he wishes to make, such as the one about minorities being pushed around for political gains, merely singe your scalp and don’t pierce you. You want to know how the Muslims and the Latin Catholics live, how the various threads of their existence bind and recoil, you want to know about their separate brands of lawlessness and you don’t get any of that in this movie. 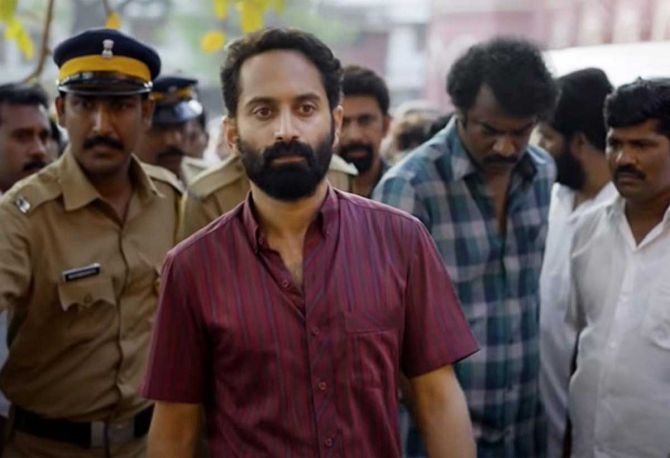 The betrayals don’t hurt because that sense of everyday confusion and accident out of which betrayals arise has been worked over into something pat and structural.

But the saddest part is that you don’t know what to make of Sulaiman repeatedly yelling about Ramadapally; you fail to comprehend this preternatural connection with the land that he claims for himself.

You are unmoved because you realise that though Mahesh Narayanan has designed a tale of intricate structures and winding paths, of murders during feasts and riots during funerals, his dwellings and cathedrals and graveyards are equally devoid of human contact. 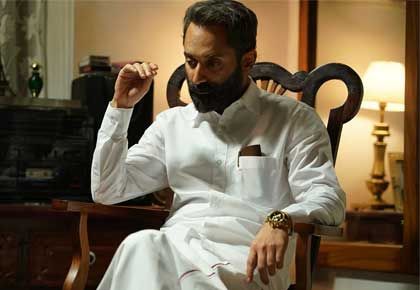