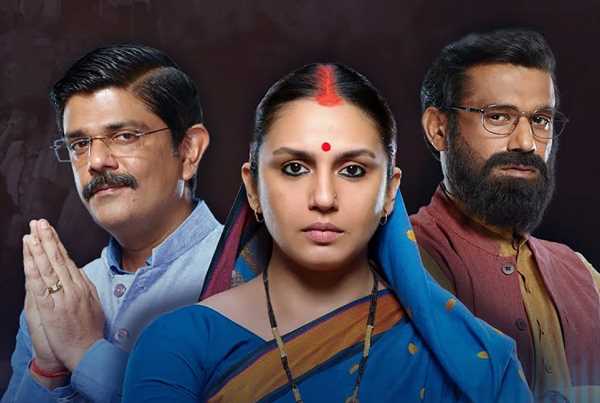 Huma Qureshi is back with the second season of her political drama,Maharani.

After impressing us with her act in the first part, Huma delivers yet again. And this time, she takes her performance a notch up.

The story of season 2 continues from where the first ended.

Rani Bharti (Huma Qureshi) is still the chief minister of Bihar and wants to do the right thing for her people.

But her husband and ex-CM Bheema Bharti (Sohum Shah) does not make it easy for her despite being behind bars.

He’s still calling the shots, ruling party members and Bihar, so to say.

Eventually, the husband-wife duo end up at loggerheads as their ideologies and strategies to run the state are polar opposites.

Taking advantage of this situation is their rival Navin Kumar (Amit Sial).

Navin has been wanting to become the CM for 17 years and this time, it seems luck is in his favour.

He hires a political PR agency, uses religion as his agenda and tries to stay in the news as much as possible.

When Bheema is finally released from jail, the two try to be one up each other in order to secure vote banks.

Rani, meanwhile, focuses on fighting corruption and crime in Bihar, but is always let down by her party people, who are loyal to Bheema Bharti.

Bheema even asks his wife to resign and hand over power to him, but Rani decides to stay in the game.

As the show progresses, we see Bheema Bharti, Navin Kumar and Rani Bharti fighting each other to become the next CM.

Story wise, the second season is very engaging and keeps you hooked to the screen.

It’s high on drama, a lot more relevant with many twists and turns.

The makers have done a fine job in pacing the story well, building the characters and giving us a plot that never gets boring.

Huma Qureshi as Rani Bharati is in terrific form.

She’s fiercer, more confident and knows how to play the game well.

Her bond with Kaveri (Kani Kusruti) forms beautifully and it’s a delight to see these two woman paving the way in a so-called man’s world.

Pramod Pathak as Mishraji doesn’t get much to perform in season 2, but his character comes into play in the second half of the season and he doesn’t disappoint either.

We also have Dibyendu Bhattacharjee entering the picture in the second last episode. Despite a small role, he leaves a good impression.

While the story and performances are at par, the show does lose a bit of steam in the second half.

Unlike the first season which was a mix of real events and fiction, this one seems entirely fictional and that works in the favour of the show.

The background score is good, but the songs distract, especially the Holi one.

The makers have also touched upon important issues like rape, reservations and caste discrimination. None of these issues are actually tackled but are sprinkled every now and then just to make the story seem more relatable, which is a let down.

Yes, it is a political drama and politics should take precedence over everything else, but it would have been better if the subplots were given a little more importance.

Having said that, Maharani 2 is worth binge-watching over the weekend. It is well-paced, has an engrossing storyline and some fabulous performances.