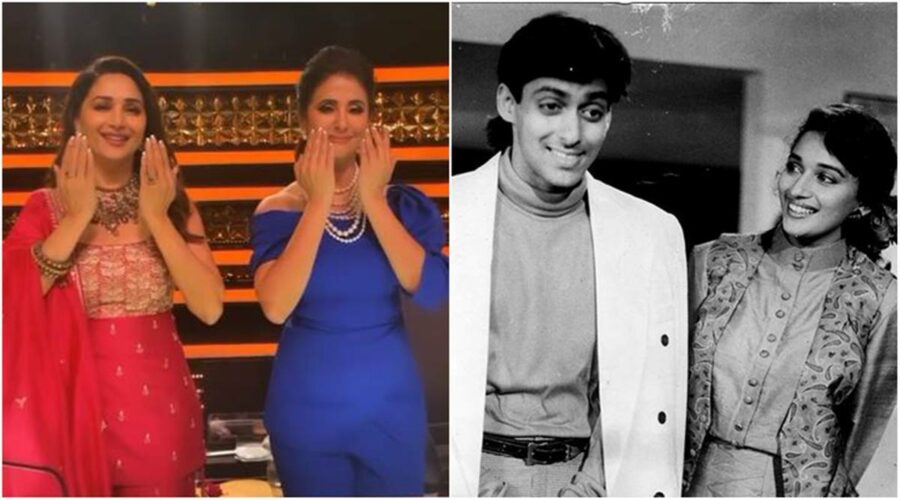 Madhuri Dixit and Urmila Matondkar will share the screen space in the upcoming episode of Dance Deewane. Madhuri also celebrated 30 years of Saajan, which co-starred Salman Khan and Sanjay Dutt on the show. Madhuri Dixit celebrated 30 years of the musical blockbuster Saajan on the sets of Dance Deewane season 3. The actor on Monday posted a reel in which she was seen performing on the film’s popular track titled ‘Tu Shayar Hai.’ Accompanying Madhuri in her graceful performance was Urmila Matondkar. Urmila, who has stayed away from the limelight for a while now, will be gracing Dance Deewane 3 for a special episode.

Sharing the video on her Instagram account, Madhuri thanked Urmila. She wrote, “Thank you @urmilamatondkarofficial for celebrating #30yearsofsaajan with me 💕😊 #saajan”. The video features Madhuri wearing a pink Indian attire while Urmila is seen wearing a blue jumpsuit. Both the actors, who ruled the silverscreen in 90s, looked absolutely gorgeous. Interestingly, this is the first time when Madhuri and Urmila are sharing the screen space together.

Saajan, which released in 1991, also starred Salman Khan and Sanjay Dutt. The romantic-drama was directed by Lawrence D’Souza and produced by Sudhakar Bokade. The film became the highest grosser of 1991. It was also popular for its music, which was composed by the popular composer duo Nadeem–Shravan.

The film industry lost Shravan Rathod earlier this year due to Covid-19. The musician, along with Nadeem Saifi, produced memorable music for films such as Aashiqui, Phool aur Kaante, Raja Hindustani, Deewana, Sadak, Saajan and Dil Hai Ki Manta Nahin, among many others.

Earlier this year, Nadeem spoke to indianexpress.com and said his bond with Shravan was the reason why the duo was able to give back-to-back hits, which are still etched in memories. “Shravan and I were close friends. We were like brothers, we could give our lives for each other. And because we had this kind of tuning, we could make the music that we did. We had many ups and downs, but we never gave up on each other. We were always connected, first by our music and then by the mutual respect and love we have for one another,” Nadeem shared.

On the work front, Madhuri, who was last seen in Kalank, is currently judging Dance Deewane 3 with choreographer Dharmesh and Tushar Kalia. The show airs on Colors TV.