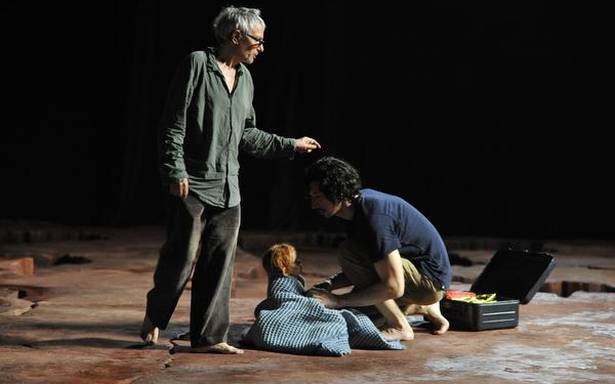 The French filmmaker talks about the wooden baby in his melancholic musical, ‘Annette’, and why he finds Guru Dutt’s ‘Pyaasa’ and ‘Kaagaz Ke Phool’ inspiring

Leos Carax, the 60-year-old French filmmaker who has made a total of six feature films in a career spanning 40 years, is perhaps one of the most polarising, peculiar filmmakers of our times. From Boy Meets Girl (1984) to The Lovers on the Bridge (1991) to Pola X (1999) and Holy Motors (2012), it’s nearly impossible to summarise or even neatly define what his films really are about.

After the world premiere of Holy Motors at the Locarno Film Festival in 2012, I once made the mistake of asking him what the film was about, really. To which, Carax, his eyes covered with sunglasses as usual, turned around and said, “I have no idea. You tell me?”

This time, I decided not to repeat that mistake.

His most recent film, Annette, which premiers on Mubi on November 24, takes him outside of Europe, straight into Hollywood’s abode, Los Angeles. It’s a strange, melodramatic musical about an aggressive comedian Henry (Adam Driver) and a celebrated opera singer Ann (Marion Cotillard) who fall in love, like movie stars of yore would, and give birth to a baby girl, Annette. Standard fare? Except that the baby girl here is a wooden doll and nobody seems to notice that. Eventually, as Henry spends time tending to Annette, and Ann’s star continues to rise, the inevitability of marital rift ruptures their relationship and the couple spiral into uncontrollable darkness. The film won Carax the Best Director award at Cannes this year. Carax, a recluse, didn’t attend the closing ceremony.

Annette marks a departure for Carax, from a language as well as a casting perspective. Nearly all his films, barring Pola X and now Annette, feature Denis Lavant, arguably one of cinema’s most versatile actors. Arriving at a decision to do this film without Lavant wasn’t difficult, Carax says, over a video call from Paris. “It’s a singing film in English with a younger character. Denis wasn’t fit for the role. I was lucky to work with Adam,” he says, pointing out that he was drawn to Driver’s physicality and his ‘monkey-like’ spirit after watching him in Lena Dunham’s Girls.

A melancholic musical, Annette’s songs have been composed and written by Ron and Russell Mael, popularly known as the Sparks brothers, who’ve also been credited for the film’s screenplay. But if the pop-and-rock duo co-wrote the film, Carax found himself working on the film’s songs. “I had to make them mine. And luckily, because we weren’t getting the money, we had a lot of time. Seven years, actually!”

The director and the musicians would hang around in Paris and after the meeting, Carax would send them some lyrics that the duo would weave into the songs. “It’s hard to tell who did what now as everything all merged into one another. When there’s no singing, that’s me… some other bits in other songs and then the last scene in prison is me.”

Not just a puppet ‘baby’

While there are several ways to interpret what the wooden baby signifies — from it being the media’s obsession with covering celebrity children to it being a telling sign of the way Henry looks at women (as puppets) — Carax has a rather straight-forward explanation.

“It would be impossible to find a child that age who sings. It wasn’t something I wished to do. But it came to me in a flash and then I had to imagine the whole film around this baby. Over time, we all got attached to the puppets. The final challenge was to also find a real-life five-year-old who can confront her father but then, like the film says, miracles do happen.”

Powered by doubts and fears

In the film, Driver’s Henry has a volatile relationship with the audience. He uses comedy as an outlet for his angst, at times even humiliating the audience members. But he also seeks out their validation as a means to assert his power. Carax’s protagonists often appear to be proxies for himself. While he certainly doesn’t have a hostile equation with his patrons, he does have a complicated relationship with them.

“The more viewers you have,” Carax says, “the easier it is for you to make films. I’m conscious of that. When I was younger, I’d say, I wanted to make films for dead people. It’s hard to say who I make films for. Annette has so many layers of reality and unreality, you end up thinking, will people accept this? That’s unavoidable.” Carax says he cannot reverse-engineer a movie to suit the taste of his audience. Instead, he says, “You put your doubts, your fears, your questions into the film. Imagining yourself as a bad father is interesting.”

The mysteries of success

An unapologetic provocateur, Carax has had a tough time making films in Europe, a cinema culture generally perceived to be a thriving ground for avant-garde and experimental filmmakers. Annette is his first English film and that too with actors who’ve enjoyed mainstream Hollywood popularity.

“In the 90s, I couldn’t make too many films because of my reputation. At times, it was due to lack of money. And many times, it was because I couldn’t cast my films. Even if I could make all the films I possibly could, I wouldn’t have made four to five more films. That’s my rhythm I suppose.”

Among the many themes that animate Carax’s work, Annette specifically delves into marital insecurities between two people engaged in creative disciplines. Does he feel that a sense of envy between two artists is an inevitable outcome of their talents clashing and competing? “To me, more than wealth, it’s success that’s interesting. I like to question, do people really want success? If they do, why? What happens when they get it and more importantly, is success actually good for people?”

Art, at what cost?

Carax mentions that the films that have influenced and shaped his own filmmaking are Guru Dutt’s Pyaasa and Kaagaz Ke Phool, both films about artists enduring personal pain in the pursuit of creation. Does he endorse that romanticised notion of great art coming at the cost of personal turmoil, something that’s not at odds with the overarching theme of Annette?

Annette premiered on Mubi on November 24

Ankur Pathak is a writer based out of Mumbai, who was formerly the entertainment editor of HuffPost India.