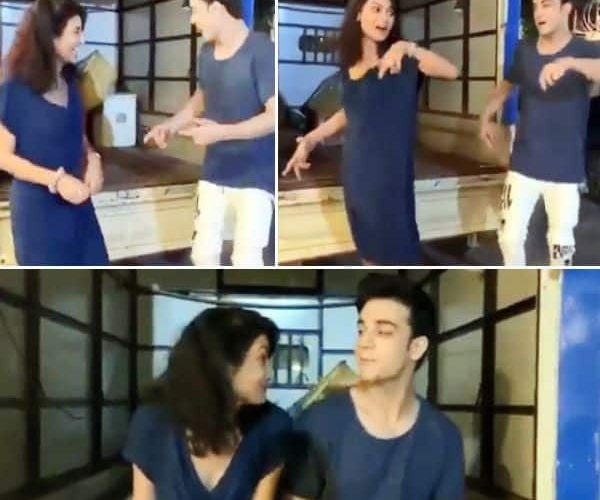 Sriti Jha and Shabir Ahluwalia starrer Kumkum Bhagya has been loved by the audience and is one of the most-watched shows. Abhi and Pragya’s love story is the highlight of the show. Sriti Jha and Shabir Ahluwalia’s sizzling chemistry is loved by all. Now, Abhi and Pragya’s daughter Prachi is in love with Ranbir. Krishna Kaul plays the role of Ranbir and Mugdha Chapekar plays Prachi in the show. They too have been loved by the audience. The show has been amongst the top 5 shows on the TRP charts. We have seen the BTS videos and pictures of Kumkum Bhagya team. They looked like one solid team and we have another proof. Krishna Kaul aka Ranbir’s off-screen dance performance with his on-screen mother-in-law, Sriti Jha aka Pragya will leave you amazed. Krishna Kaul is quite fond of dancing and often posts videos on Instagram. His recent dance performance on Teri Patli Kamar Pe with Sriti Jha has gone viral on the internet and fans are loving the bond between them.

Apparently, it is a song from Krishna Kaul’s music album and he had convinced Sriti to perform with him. They both looked so cute together and this is surely the best video on the internet today. Krishna Kaul posted this video and also thanked Sriti for doing it. He wrote, “Last but definitely not the least! Thanks @itisriti for being an angel walking among humans. You’re an inspiration and i mean it when i say I’d be my best version of myself if i was 40% of what you are. love you to the moon and back.” Take a look at their video here:

Last but definitely not the least! Thanks @itisriti for being an angel walking among humans. You’re an inspiration and i mean it when i say I’d be my best version of myself if i was 40% of what you are. love you to the moon and back. To listen to “ TERI PATLI KAMAR “ go to the link in my bio.

Krishna Kaul had earlier spoken about his bond with Sriti Jha in an interview with Pinkvilla. He said, “With Sriti, I think we have an amazing camaraderie. She is a great friend now and I have immense respect for her and the kind of work she has done. Even if she is talking about something random, you always love something from her. She is the giving types; she is very positive.”