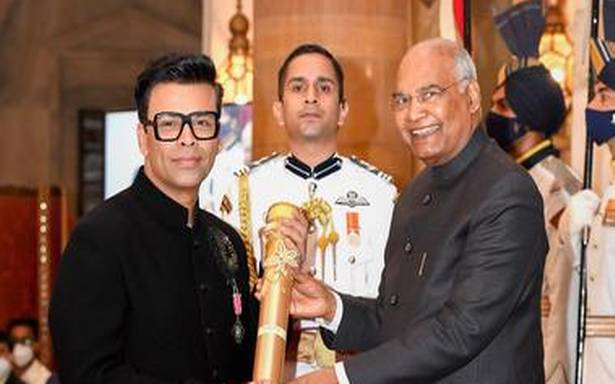 President Ram Nath Kovind presented Padma awards to 73 individuals, some posthumously. Of these, four were Padma Vibhushan, eight Padma Bhushan and 61 Padma Shri awards for the year 2020, according to a statement issued by the President’s office.

“I feel extremely fortunate to receive it from the hands of our honourable President Shri Ram Nath Kovind,” he wrote on Instagram adding this is a monumental day “for me, my mother, my kids and my company, and will forever be etched in my memory”.

“Thank you so much for all your wishes and the abundance of love!” Johar added.

Ekta was felicitated for her contribution in the field of television, films and digital content. Her producing credits include popular soap operas like “Kyunki Saas Bhi Kabhi Bahu Thi”, “Bade Acche Lagte Hain”, films “Once Upon a Time in Mumbaai”, “The Dirty Picture”, “Veere Di Wedding”, and web series “Bose: Dead/Alive” and “Broken But Beautiful”, among several others.

The producer, daughter of actors Jeetendra and Shobha Kapoor, said it is an “absolute honour” to receive the fourth highest civilian award for her contribution in the field of performing arts.

“It is a surreal moment and a matter of great pride. I want to dedicate this badge of honour to my two pillars of strength – my mom and dad. They believed in me with their whole heart and it is because of them, I am who I am,” Ekta said in a statement.

She said she was overwhelmed with the love and accolades coming her way.

“I want to thank my family, friends, my team at Balaji Telefilms and most importantly – the audience, for believing in me and supporting me. I hope to always push the envelope, challenge norms, give talents a platform that they truly deserve, instill pride and give back to the country that has fuelled my ambition and dreams,” the filmmaker added.

Ranaut, who was presented with the Padma Shri two weeks after she picked up her fourth National Film Award, expressed her gratitude for receiving the honour “for being a model citizen” of India.

“As an artist, I have received many awards, love and acknowledgement but today I have received an award for being a model citizen from this country, this government. I’m grateful,” she said in a video posted on her official Instagram page.

“When I started working at a young age, I didn’t achieve success until 8-10 years into my career. I didn’t enjoy my success. I turned down offers to endorse fairness products, boycotted item numbers, rejected working in big hero films and with big production houses,” Ranaut, known for films like “Queen”, “Tanu Weds Manu” franchise and this year’s “Thalaivi”, added.

The actor-producer, who is known for her provocative statements, said receiving “this honour will shut the mouths of many people” who often ask her why she concerns herself with matters of national importance.

“I made more enemies than money. When I became more aware about national matters, I raised my voice against any power that threatens the country…” she said, adding she had lost count of how many legal cases she is currently embroiled in.

Wadkar, known for lending his voice to melodious songs like “Ae Zindagi Gale Laga Le”, “Tumse Milke” and “Megha Re”, said he is happy to receive the honour.

“It’s a great honour. Even though it came a bit late, I believe, I’m happy that my country has recognised my contribution. It’s (Padma Shri) is one of the biggest honours for an artiste and has motivated me to do even better in the field of music,” Wadkar said.

Sami was also awarded the honour in the field of art. The Pakistan-origin musician, who is also a concert pianist, singer and actor, became an Indian citizen in 2016.

The music composer said he is grateful to the Government of India for bestowing him with the Padma Shri Award, the “greatest honour”.

“I am forever indebted to my beautiful people of India who’ve loved me unconditionally & been an integral part of my journey which has brought me till here! Luv you all,” the composer wrote on Twitter.

Joshi, who was presented the Padma Shri in the field of art, is an award-winning stage, television and film actress known for her work in serials like “Ba Bahoo Aur Baby”, “Meri Aashiqui Tumse Hi” and “Hasratein”.

She has performed in about 15,000 shows in Gujarati, Marathi, Hindi and Marwari over a span of six decades.

The Padma awards are given in three categories —Padma Vibhushan, Padma Bhushan and Padma Shri – and announced annually on the eve of Republic Day.