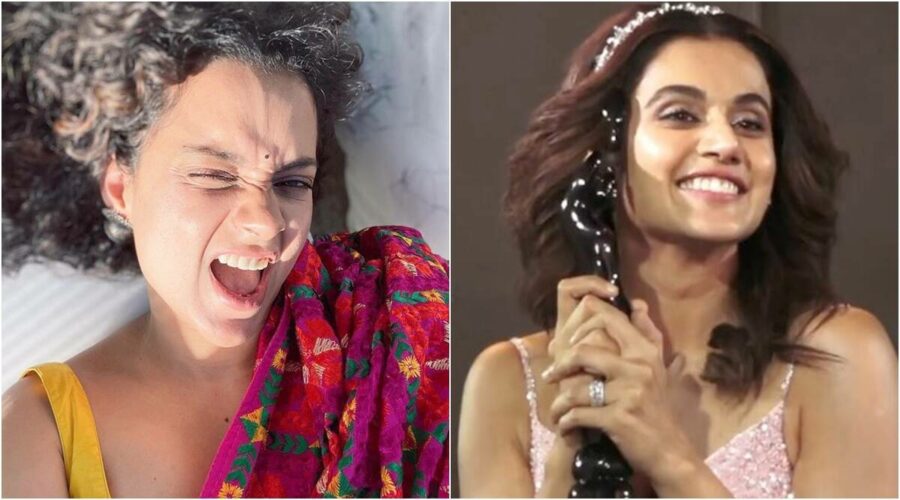 Kangana Ranaut, who recently received the Best Actress National Award for Panga and Manikarnika, regularly attacks Taapsee Pannu, while also expressing her anguish with her colleagues from the Hindi film industry. Kangana Ranaut has replied after a fan shared a clip of Taapsee Pannu thanking her while accepting her award for Thappad. This comes after a long list of face-offs between the two actors that started after Taapsee was tagged as ‘sasti copy’ of Kangana by her sister Rangoli Chandel.

Taapsee Pannu recently won the Best Actress honour at the 66th Filmfare Awards for her critically acclaimed performance in last year’s Thappad. During her winning speech on the stage, Taapsee praised all her fellow nominees. These included Kangana Ranaut (Panga), Deepika Padukone (Chhapaak), Jahnvi Kapoor (Gunjan Saxena) and Vidya Balan (Shakuntala Devi). She thanked Kangana for pushing the boundaries with her films. Taapsee said, “Thank you so much Kangana for pushing the boundaries. The benchmark of your performances just keeps going higher every year.”

When a user shared the clip from Taapsee’s acceptance speech, Kangana was quick to reply. In her response, the Thalaivi actor wrote, “Thank you @taapsee well deserved Vimal elaichi filmfare award…. no one deserves it more than you.” There was a veiled dig in her comment as the awards in India have time and again come under the scanner for being partial and their various endorsement deals.

Kangana regularly takes to Twitter to express her anguish with her colleagues from the Hindi film industry. In response to a fan’s tweet recently, she expressed how she praised the work of her contemporaries like Taapsee Pannu, Alia Bhatt, Deepika Padukone, Anushka Sharma and Kareena Kapoor, but none of them reciprocated by lauding her performance in any of her films.

On the work front, Kangana is awaiting the release of the multi-lingual political biopic on former Tamil Nadu chief minister Jayalalithaa, titled Thailaivi, directed by AL Vijay. Taapsee, on the other side, began filming for Shabaash Mithu, a biographical drama based on the life of Indian cricketer Mithali Raj.

04/09/2021 TV & Movies Comments Off on Kangana Ranaut replies as Taapsee Pannu thanks her while accepting award, says ‘No one deserves it more than you’
India