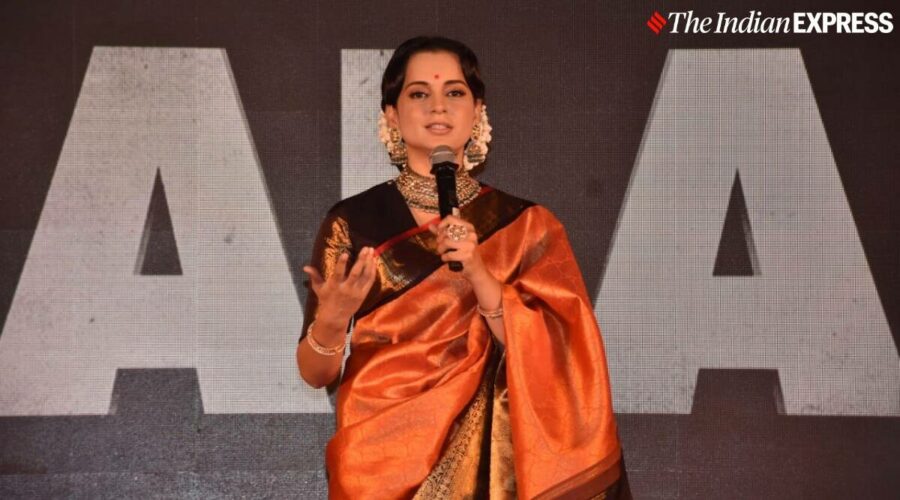 After launching the trailer of Thailaivi in Chennai and Mumbai on Tuesday, Kanaga Ranaut celebrated her birthday with Ekta Kapoor, Anupam Kher, Vivek Agnihotri and Pallavi Joshi. Members of her Thalaivi team were also present. Kangana Ranaut had one hectic birthday on Tuesday, which was packed with Thailaivi trailer launches in Chennai and Mumbai. The actor finally let her hair down later that day to celebrate her birthday with Ekta Kapoor, Anupam Kher, fellow National Film Awards winner Pallavi Joshi and Vivek Agnihotri, and her Thalaivi team.

The actor, who was conferred with a National Film Award for her films Panga and Manikarnika on Monday, started her day on Tuesday with releasing the trailer of her upcoming political biopic on Tamil Nadu’s chief minister Jayalalithaa, first in Chennai and then in Mumbai. After she finally tuned out of her work duties, Kangana threw a grand birthday bash for her few close friends from Bollywood, and the Thailaivi team, in Mumbai.

Producers of Thailaivi — Vishnu Vardhan Induri and Brinda Prasad, and the director of the film AL Vijay also attended the party. Anupam Kher took to his social media platforms to thank Kangana for a “great evening”, and then went on to congratulate her for the National Award win for her her films Manikarnika and Panga. He wrote, “Happy birthday to you. May God give you all the happiness in the world. And what an outstanding and power packed trailer of #Thalaivi. You really hit where it hurts. Stay safe. Love and prayers always!!”

Earlier in the day, Kangana had tweeted, “Today I turned 34, they never told me, I will be at the peak of my career at 34, I will be celebrated for my art and my experience will be valued and my age or marital status would mean nothing to anyone, I feel like a super human loaded with exceptional experience about skills.”

Kangana’s look in the trailer of Thailaivi has been appreciated. About getting into the skin of her character, the actor said at a press conference in Mumbai on Tuesday, “I never thought there are similarities between us. When I met Vijay sir, and we felt that we are poles apart. My frame work is skinny, I have angular jawline and cheekbones. We went to America and did a lot of tests and Vijay sir wasn’t impressed with any of the test (looks). I was at that time researching on her and watching her films. So, for the young age, I started gaining weight as she was curvaceous and beautiful. You won’t believe it’s so surprising that I actually started to look exactly like Jaya Maa. It was another strange thing that I experienced. It was either her blessing or a desire that this film should get made. I was just a medium.”

Kangana Ranaut’s Thailaivi, directed by AL Vijay and penned by celebrated writer KV Vijayendra Prasad, is set to release in theatres on April 23.