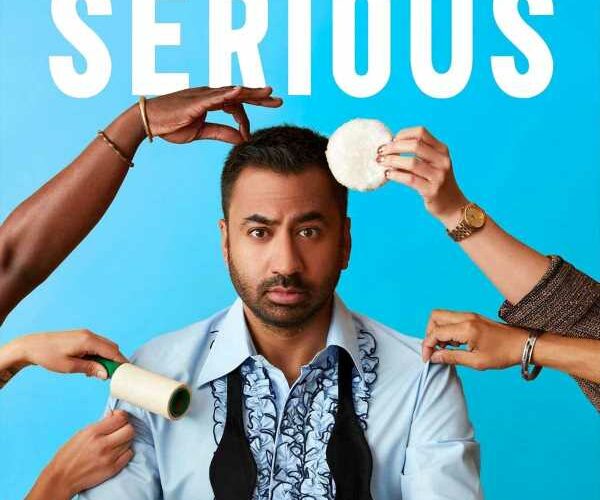 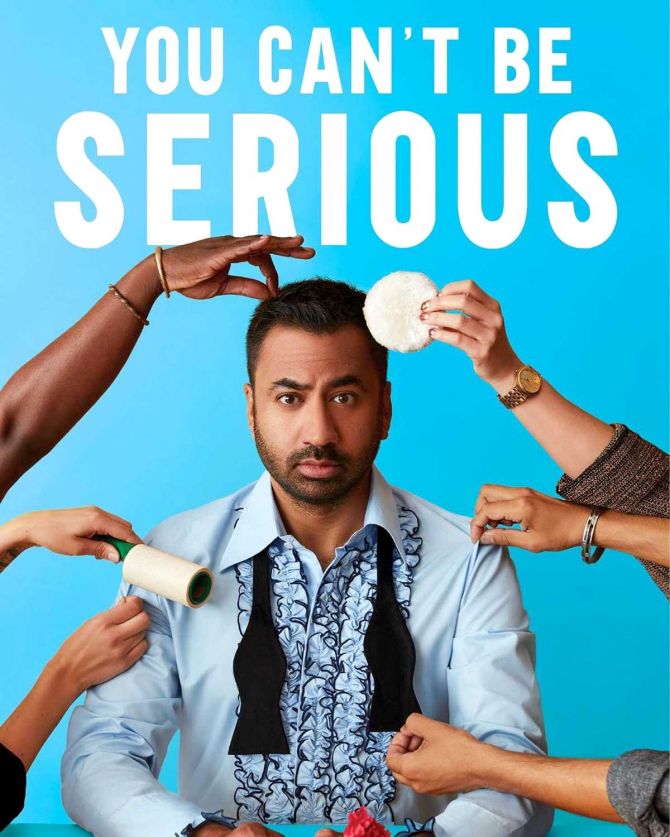 Kal Penn discusses his journey, dealing with racism in Hollywood, his parents’ immigration story as well as his coming out in his memoir, You Can’t Be Serious.

In an interesting conversation with Subhash K Jha, the actor — born Kalpen Suresh Modi — says, “I decided to write this book for the 20-year-old version of me — someone who had a lot of hopes and dreams and knew there wasn’t quite a book out there to guide you or share stories.”

You are ready with your memoir. Isn’t 44 too early for the luxury of looking back on your life. What prompted you to take the plunge so early in life?

I decided to write this book for the 20-year-old version of me — someone who had a lot of hopes and dreams and knew there wasn’t quite a book out there to guide you or share stories.

I also wrote it for anyone out there who has ever been told that the thing they want to do — maybe it’s a new hobby, a new passion, a career change, a class they want to take — is crazy.

I don’t view the world as binary.

We have so many opportunities and it’s okay to take the plunge, change your mind, do all sorts of things with your life and career.

So this book is for anyone who has ever toyed with that.

I wanted to write it in a way that makes you feel like we’re having a beer together like we’re on the journey together.

I hope it makes people laugh and smile.

How do you look back at your life and career?

I look back at my career so far with a lot of gratitude for those who have supported me, and other desi artists.

The early chapters of my book detail the typecasting, stereotyping and racism that many performers of colour go through.

In looking back, I’m so thankful that while there’s still plenty of work left to be done, we now have so many more diverse shows out there.

So many wonderful South Asian writers, performers, studio executives, directors, producers, who have created so much more opportunity.

When you started in the West, Indian actors either played Indians or Pakistanis and always caricatural. Things have changed drastically and for the better for Indian actors. How difficult was it for you?
Do you think an entertainer like you paved the way for Dev Patel and Priyanka Chopra?

I often think of entertainers who paved the way for me — people like Sarita Chaudhury and Ajay Naidu — and also scores of performers who are wonderful, who work regularly in theatre and on television, but whose names aren’t as known because of the lack of opportunity they faced in the generations before ours.

I decided to open up about the specifics of typecasting in Hollywood with some very clear examples in my book (like racism on the sets of Sabrina the Teenage Witch and Son of the Mask) because I want to point out the not-so-distant past, celebrate the present, and learn from both as we look toward a brighter future. That’s how the system can change for the better.

A refreshing ‘colour blindness’ has crept into American cinema: A brown actor can now play a character from Charles Dickens. Was this possible earlier?

I have to tell you I am loving that a brown actor can play Dickens or a musician in Danny Boyle’s Yesterday or any number of colour blind roles that just would have been totally unfathomable less than a decade ago.

It’s refreshing, and a real testament to how the industry is changing, and how many fantastic actors there are in the community.

On the other hand, there are sections that feel only blind actors can play blind, and gay actors should play gay characters.

I respect that question, and feel those conversations should be had on a case by case basis — there’s so much nuance and passion surrounding art, representation, identity and storytelling. 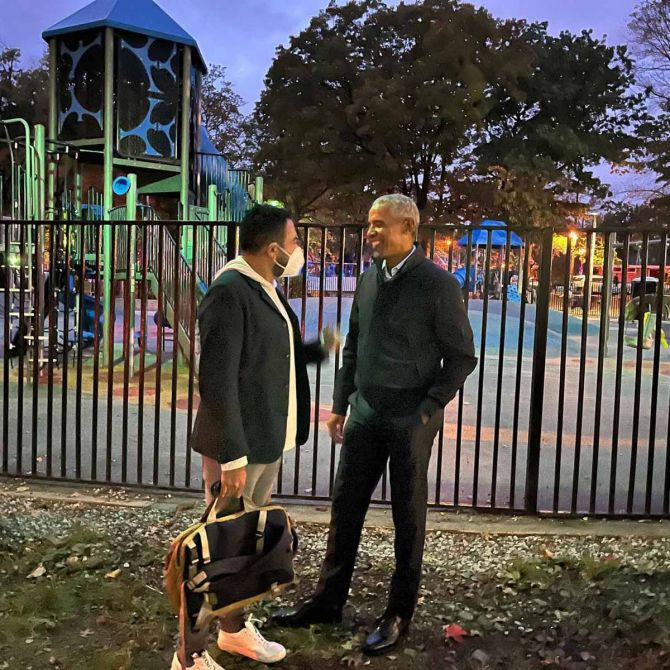 How do you look back on your stint in the White House? Do you feel from Trump to Biden, America has fallen from the frying pan to the fire?

I’m obviously an American progressive, and I’ve had the privilege of working in the Obama White House.

In any democracy, you’ll see things move forward, then slip back a bit, then move again — it’s a constant reminder that the beautiful mess of the democratic process requires us to constantly stay involved.

I look back at my White House stint with a lot of pride — I was so proud to help plan the first-ever Diwali celebration held by a sitting president (in person).

We made some real progress on climate change, health care and human rights.

Politics will always fluctuate, but as my grandparents — who marched with Gandhiji — would tell us, you always need to do the right thing and stand up for what you believe.

You created a stir by coming out. How difficult was it for you to take this difficult decision? What prompted this decision?

I’m so excited to share the stories, from tough experiences dealing with racism in Hollywood to working in perhaps the most diverse place I’ve ever worked — in the White House for the first Black President of the United States, to my 11-year relationship with Josh, to my parents’ struggles as they came to America and built a life for themselves.

My partner Josh, like my parents, doesn’t love the limelight.

So I’ve always tried to be respectful of their wishes.

How did you convince them to be a part of the book?

As I started putting the book together, I called my parents and said, ‘Hey, I think it would be really interesting to share some stories about what brought you to America and what the community was like when we were kids,’ and they were alright with that.

I said to Josh, ‘The way we met is so funny, how we connected on — of all things — a NASCAR race on TV. I think that would be a fun story to tell,’ and like my parents, he agreed.

So I’m really excited to share stories that are such a blessed part of my life that I hope readers will also connect with in nice ways.

I hope the stories make you smile. 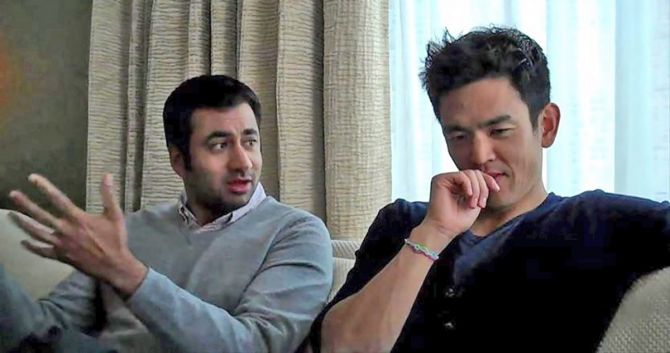 There was a time when an actor like Rock Hudson suffocated in the closet. How liberal and accepting of alternative sexuality do you find the entertainment business of today?

I think there’s some overlap with conversations about race — things are definitely much better today than they were 20 years ago but we have a long way to go.

Still, I’m hopeful on all fronts.

The real game-changer I think is streaming platforms like Netflix, Amazon and Hulu.

They tell such diverse stories and their shows have such diverse characters in ways that make all audiences connect.

I remember when we shot Harold and Kumar Go To White Castle, the general thinking in Hollywood was, ‘We don’t think two Asian guys can sell a movie’ and the reason we proved them wrong was that the fans showed up — they just wanted to laugh with us, and experience a road trip movie about friendship. It was universal.

The streaming platforms offer that on a global scale now, and it’s so refreshing.

Speaking of, when’s the next season of Made in Heaven dropping?

What are your forthcoming projects?

First, I hope the book does well enough that we can sell the rights and make a series out of it.

I’m doing a couple of horror films this winter and developing some television.

I also launched a Food Network show over the winter, and we’re waiting to see if that gets a season two pickup. So thankful for all the opportunities.

Are you and your partner planning a baby?

Which auntie put you up to asking me this question? (laughs)

We’re focused on keeping everyone safe through the pandemic, so haven’t fully thought through a family just yet.

I appreciate all the love and good wishes and will keep you posted.

Indian entertainers are notoriously famous for lying in their memoirs. How difficult was it to tell the truth about yourself? Were you able to recall all the details from your past the way they happened?

I appreciate this question so much because I put in all the work!

One of the reasons this book took more than four years to write is because I fact-checked everything.

I spent months on Zoom calls, meetings and emails with people who were in the room for all the stories I tell.

Some people had additional colour to add to the stories (like casting director Van Wilder and my friend Lauren Grey, who was the casting assistant on the film I did with Ashton Kutcher and Megan Markle).

It was important to me that I get things right, and that what I recollect could be confirmed by other people.

It also makes for a better, more honest story, I think.

What according to you is the most relevant part of your memoir, and why?

One of my favourite chapters is about how I got my job at the White House.

I won’t spoil it for the reader, but it’s a hilarious, ridiculous true story that involves getting hazed by Mrs Obama and my dad stalking Tiger Woods in a backstage tent before the Obama inauguration concert.

I love that section because it’s a fun story, but it also talks about the realities of the job market, our human insecurities, my parents’ immigration story, and how we can all make the world a better place.

My book is a story about hope and possibility, and I think that chapter especially encompasses that.