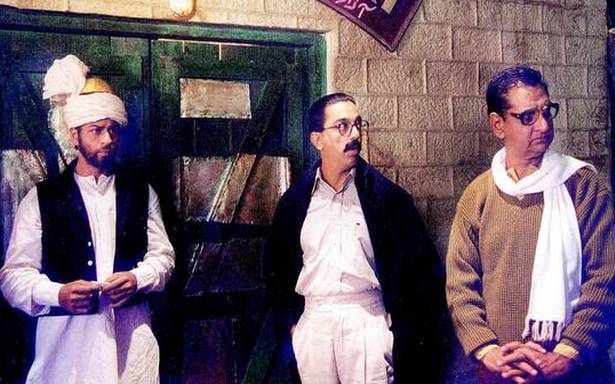 Post a special screening of his 2000 film ‘Hey Ram’, Kamal Haasan went down memory lane, recalling the incidents that led to the making of the classic

A little over a month back, Mohandas Karamchand Gandhi turned 150. And the man, who came remotely close to carrying out the task of executing Gandhi, turned 19. We are referring to Saketh Ram, the confused protagonist of Hey Ram, written and directed by Kamal Haasan. The almost wailing voice of Kamal in the song ‘Raghupati Raghav Raja Ram’ reverberated off the walls of Sathyam Cinemas, where a special screening of the film was arranged by Raaj Kamal Films International, with a singular purpose: to recall a dark chapter of India’s history and to celebrate the man who introduced ahimsa to the world.

Following the screening, an interactive session with Kamal Haasan and Tushar Gandhi, the great grandson of MK Gandhi who was also involved in the making of the film, was moderated by writer Hariharan. Kamal kicked off the session with a confession: that finding Gandhi was a “personal journey”. “I come from a family of Gandhi bhakts. But I am nobody’s bhakt. I had a controversial opinion on Gandhi when I was a teenager. This film is my apology to him. I never call him Mahatma because I wanted to see his face behind such a big halo.”

About the significance of surrealism in the interval stretch and why Kamal had used soma rasa to get Saketh Ram turned into an assassin, the actor said, “I wanted something heady to show his mind-state. Instead of intellectualising it, I opted for a simple soma rasa. Intoxication can be anything — even something as simple as ‘In the name of God’,” he said. Tushar, on the other hand, confessed that he requested Kamal Haasan to not make Hey Ram, when he saw the actor holding a revolver in the poster. He was afraid that Kamal was going to take the perspective of the assassin and was worried about the social implications, “Had Kamalji played that role, no matter how evil he was shown in the film, he would have still been the hero. Which is why I was against it. But I am glad that he didn’t listen to me,” he said.

An experiment with truth

Kamal Haasan spoke in detail about the contribution of Ilaiyaraaja and how the music composer saved the film at the last minute. “I went to another composer because I had done 100 films with Ilaiyaraaja. I thought the audience wanted a change, but I was wrong,” he said, explaining, “When I went to Raaja, his first question was: ‘What shall we do now?’, instead of ‘Why did you leave me?’”

Having completed the shoot, Kamal even thought of re-shooting certain sequences when Ilaiyaraaja came onboard. “He asked me not to re-shoot and composed music for whatever footages I had. The ‘Nee Paartha Paarvai’ you see now had a different tune. In fact, he was the one who suggested ‘Isaiyil Thodanguthamma’, which was not there in the script.”

Hey Ram, mounted on a large canvas, failed to mint money when it released in 2000. A member of the audience asked if that left him feeling like he was fighting a lone battle. “Marathon running is also a lonely business. It is not about competition, but about completion,” said Kamal, to roaring applause.

The hoots and cheers hit the roof when Kamal was asked if he can make another Hey Ram today, given the current political climate. “If someone challenges me, I will. I believe a good, honest filmmaker will make a film like this any day — whether it is in 2019 or 2024,” he said.