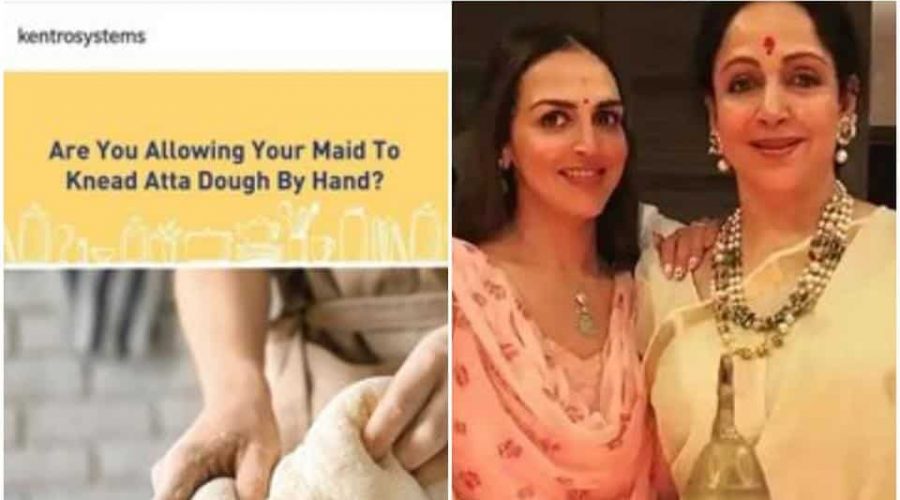 Actor and politician Hema Malini has issued a clarification after an advertisement featuring her was slammed for being classist. The ad, for a dough kneading machine, has been taken down by Kent RO.

“Are you allowing your maid to knead atta dough by hand?” the advertisement asked, and added, “Her hands may be infected,” in reference to the ongoing coronavirus pandemic. “Choose KENT Atta & Bread Maker for hands-free kneading of dough. Let automation take care of hygiene this time!” The ad also asked people not to “compromise with health and purity”.

In response to a tweet that called out the advertisement for being classist, the Kent RO Twitter account responded with a statement from the company chairman. “Please accept our sincere apologies for having published the Ad of Kent Atta & Bread Maker. It was unintentional but wrongly communicated and it has been withdrawn. We support and respect all sections of the society,” the statement read.

Hema Malini, a longtime brand ambassador for the company, didn’t issue an apology, but wrote in a Twitter clarification, “Views expressed by the recent advertisement of Kent Atta by @KentROSystems do not resonate with my values and are inappropriate. The chairman has already tendered a public apology for the mistake. I hereby wish to put on record that I respect and stand by all sections of society.”

Also read: Dharmendra, Hema Malini celebrate wedding anniversary, she says ‘It is your good wishes that have been with us all through these years’

Several Twitter users had objected to the advertisement. “Hi #Kent @KentROSystems, what casteist classist bulls**t is this?? You should be ashamed of yourself for putting this ad out,” one person wrote. Others described it as ‘hideous’ and ‘despicable’.