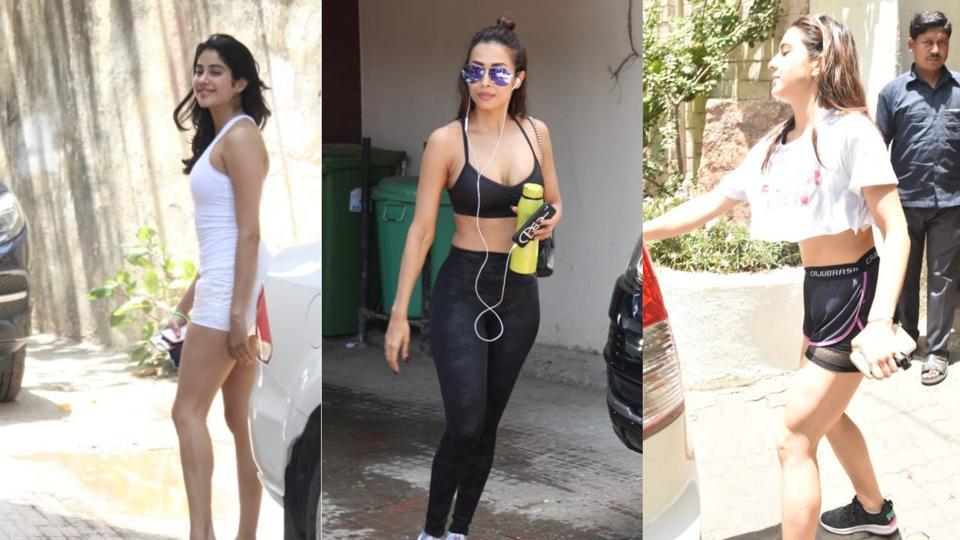 Several Bollywood personalities were seen out and about in Mumbai recently. Celebrities continued to visit Ajay Devgn and wife Kajol’s residence to offer their condolences for late Veeru Devgan who died of a cardiac arrest on Monday. Producer Bhushan Kumar, who co-produced Ajay’s latest release De De Pyaar De, was seen arriving at their house on Wednesday. A day before, Ishita Dutta, Rohit Shetty and others were seen visiting the Devgns in the evening.

Several celebrities were seen during their regular gym sessions. Malaika Arora, who is currently in news over her relationship with actor Arjun Kapoor, was seen during her gym session. She looked stylish in black athleisure wear.

Janhvi Kapoor has returned from Lucknow where she was shooting for the Gunjan Saxena biopic with cousin Shanaya Kapoor. She was seen during her Pilates session and was all smiles for the cameras in white vest and shorts. Meanwhile, Shanaya was seen in a salwar kurta, complete with a bindi, post her gym session. Tiger Shroff and Chitrangada Singh were also spotted in the city post their gym routine too.

Sara Ali Khan and Kartik Aaryan are currently working on their film, a sequel of Imtiaz Ali’s Love Aaj Kal. The two were spotted in Juhu on Wednesday. A day before, Sara spent quality time with her grandmother Sharmila Tagore, father Saif Ali Khan and half-brother Taimur, a picture of which was shared by Soha Ali Khan on her Instagram.

05/29/2019 TV & Movies Comments Off on Have you seen these pics of Malaika Arora, Janhvi Kapoor, Kartik Aaryan and Sara Ali Khan?
India