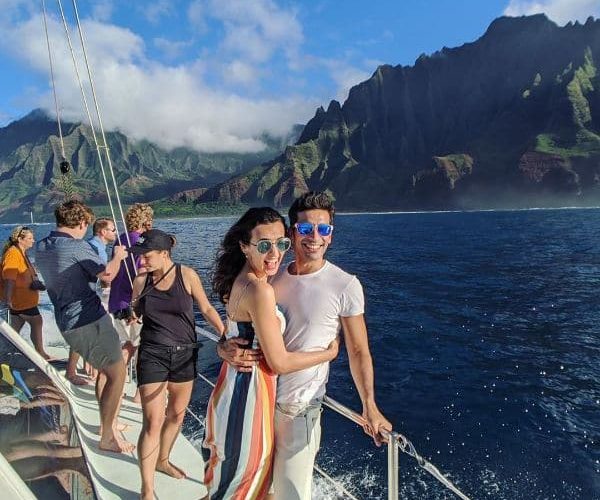 Sanaya Irani is known for her fab work on Indian TV. From Miley Hum Jab Tum to Iss Pyaar Ko Kya Naam Doon, Sanaya has excelled in every role. The actress remains one of the top actresses of the TV industry and is still sought-after by producers. Sanaya Irani turns a year older today. She made her debut on big screen with Vikram Bhatt’s Ghost. Her husband, Mohit Sehgal is seen as Jay on the show, Naagin 5. He has got a great response so far. When Sanaya is not winning us over with her fab performances, she is travelling to far-off lands. Yes, she loves to travel. From Hawaii to Greece, she has been to many parts of the world. On the occasion of her birthday, let us take a look at some of her best travel pics…

As someone who’s bones ache in air conditioning , I never thought I would say this but I miss the cold 🥶… its just too hot 🥵🥵 #winter #winterjacket #london #globalwarming

There is nothing like posing before a decked Christmas Tree in London!

Trekking through muir woods what an awesome day 😀😀#freshair #lovetrekking

Sanaya Irani proves she is a nature lover as she enjoys a trek in California’s Muri Woods National Park.

Sending virtual kisses your way @itsmohitsehgal . Wish I was there with you today. Happy Birthday baby love you ❤️❤️ and miss you so much 🤗🤗.

If you do not kiss by the Eiffel Tower in Paris, then have you really been to the city?

What a dinner it was @salarimnaam_mo_bkk 7 courses of the best Thai food I have ever eaten . The entertainment, the food and the people attending to us all were just delightful 😀😀. @schauer.c thank you for everything 🙏🙏. @mo_bangkok

Even Bangkok can be exotic and luxurious if you travel in style like Sanaya Irani and Mohit Sehgal.

Sanaya Irani has the perfect DDLJ vibes in this pose from Lugano, Switzerland.

Sanaya Irani enjoys a tour of the Colosseum at Rome. It is one of the UNESCO World Heritage Sites.

#napalicoast what a sight this was . I think we all have that shot from the movie Jurassic Park etched in our memories where the helicopter is flying through the cliffs with all those beautiful waterfalls around … and to finally be there and see it for real was a whole different experience in itself . What a fun boat ride it was to the coast 😀😀 bumpy as hell which made it sooo much fun , we got to see dolphins and even saw a whale … but ofcorse the #napalicoast was the icing on the cake and what a delicious one it was 😍😍. Another must do if you are in Hawaii 😄. @itsmohitsehgal #hawaii #travel #lifeisbeautiful

This has to be one of the most priceless experiences of her travel diaries. She went to Napoli Coast of Hawaii and spotted a whale. Beat that!

BollywoodLife wishes Sanaya Irani a very happy birthday and we hope to see her back on TV pretty soon!